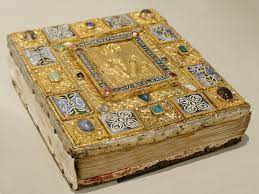 I get inspired by the oddest things – I’ve said before that it can be as simple as an ancient dye, a splinter of wood, a fragment of cloth and so on.

I research. Often I come up with a lot but just as easily, I can come up with little. And often, a whisper sounds in the back of my mind – ‘There’s not much here! Is there enough for a story?’

But by now, I will have written a rough plot and couple of chapters and there will be characters who have a story to tell and I find I can’t leave them behind or throw them in the bin just because there’s only a wisp of fact in the original inspiration.

Such is the case at the moment.

I saw a magnificent enamelled and jewelled book cover on display at the V and A. Inside, the pages were beautifully scribed – regimented lines, simple half-uncial styled letters. A profound red capital at the beginning of each paragraph/sentence. 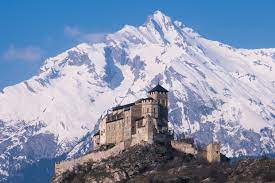 It is the Sion Gospels – which belonged at one point to the Abbey of Notre Dame de Valère in the canton of Sion on the Rhône River before it drifted into private ownership in the 19th century. It seems to have been begun somewhere in Germany in the 10th century, with the binding or part thereof, being completed in the twelfth century. My timeframe! 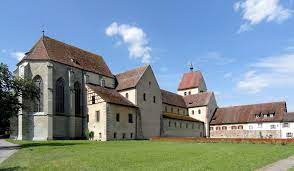 I then had to find which monasteries in Germany had a reputation for fine creative work along the lines of this perfect piece. In the end, I settled for Reichenau for two reasons – firstly it’s situated on Lake Constance close to the Swiss border. In modern times, it would take just over three hours to get between Reichenau and Notre Dame de Valère. In the 12th century, longer but close enough to make communication between the two a possibility.

Secondly, I chose Reichenau because of its astonishing setting. Like Notre Dame de Valère, it’s be-ringed by towering mountains and thus has a terrific theatricality about it.

And thirdly because it had a scriptorium.

There’s absolutely no evidence that the Gospels came from Reichenau’s scriptorium. None at all.

This then, becomes part of a fiction writer’s dream. I get to ‘create’ a history around my piece of eclectica (within reason) and have my character, Brother Bruno, live out a 12th century life (based on extant facts) as a scribe. 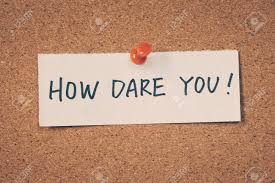 Pure-blooded historians will say ‘How dare you!’

Some historical fiction writers will say ‘Why would you?’

My answer is that providing that my settings and the actions of my characters are authentic for their timeframe, I see nothing wrong with it.

I write to engage and entertain. If I encourage my readers to take an interest in the awesome culture of the 12th century in the process, then I am happy.

« Another one bites the dust…
Healing place… »