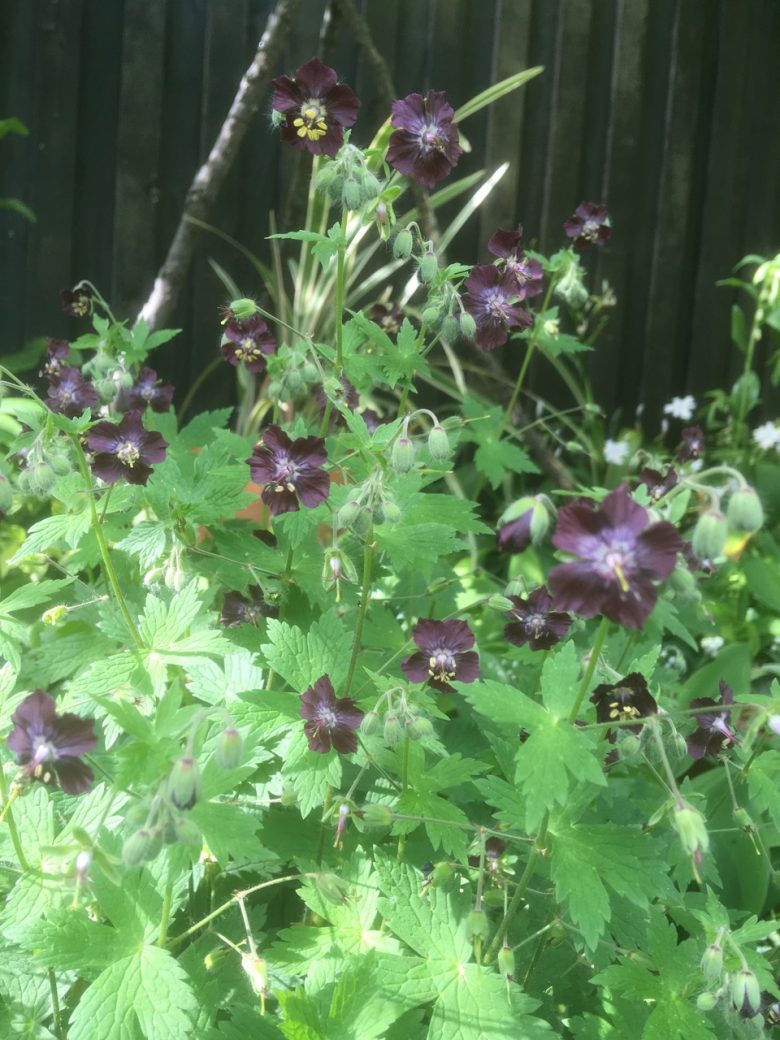 I haven’t been part of Six on Saturday for very long but it’s fairly obvious I’m growing a white garden. For many, I daresay white can be boring, but this evening, my husband and I walked in the gate from a dog-walk and the whites and ivories glowed like moonbeams. They provide their own sort of luminescence and in fact for me, it’s a kind of secretive garden at night – pearly light leading me on.

But guess what? I do have colour! Some of the plants have little backstories and it’s that which allows them to take their part in my white garden. 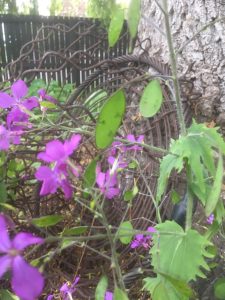 Under the willow I have masses of Honesty (Lunaria annua) with delightful mauve flowers and wonderful seedheads. I also have a white variety (of course).  I scatter the seeds  everywhere under the willow once the seedheads have formed. They are so beautiful – that stunning mother of pearl end-stage that looks so good in vases in late summer/early autumn. I have no idea where the plants came from. Perhaps the seeds, being so fragile, blew in on the wind. Whatever the case, they are keepers. 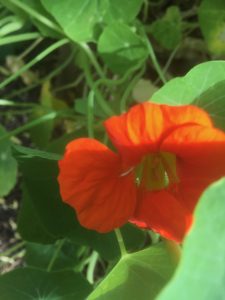 The nasturtium is so hardy and fills a big gap under a 50+ year old willow. That and the fact that the flowers look stunning and taste so peppery and fresh in a salad means it can stay.  Once, when we first took ownership of the property, it was everywhere – a complete pest. Now it has restrained itself, with help from a vigilant eye, a ready hand to pull out errant seedlings and a well-oiled pair of little pocket secateurs. 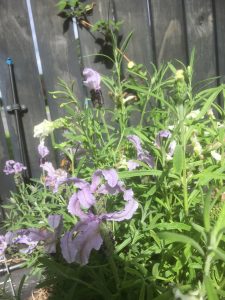 Love this French Lavender that offers me palest mauve and cream colours on the one plant, along with delicious waving petals. I have no idea of its name – it’s just another hardware store purchase. It’s growing in the driest, most baked part of the garden and I love it for hanging in against the odds. 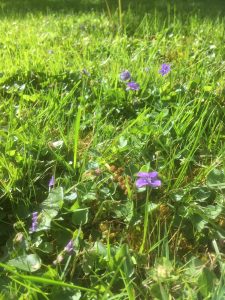 Violets in the lawn – heavens knows where they come from but along with white daisies and clover flowers, it’s quite a picture. This pic gives no idea of how thick they are through the lawn. 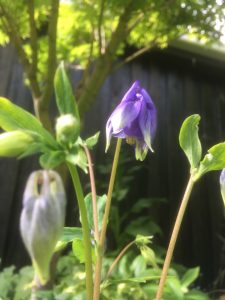 Aquilegia –  bog ordinary but it has a personal history in the garden. We bought this house and its large garden from an elderly couple who built it all with love. Nasturtiums, blue aquilegia and opium poppies featured big time. I decided I wanted a white garden but the blue aquilegias and orange nasturtiums kept popping up, no matter what, so we decided there was a message there and we now let them do their thing (within reason).

The opium poppies also had a story. The former owner had cancer and wanted to assist his treatment by using comfrey and poppy. Sadly he eventually succumbed to his illness, leaving many poppies behind. Poppies are a commercial crop in Tasmania, a notifiable narcotic crop. Given that the huge veggie garden was completely covered in poppies, we set about trying to de-head all the flowers before the seedheads formed – it was a massive job and there was nasty latex-like syrup dropping everywhere as we worked. I then went to the Police, reported the poppies and the local policeman decided to investigate the size of the crop. The upshot was that it all had to be grubbed out, taken to the tip and burned for safety and for legal compliance. (One wonders whether the tainted smoke gave the odd person a thrill at the time!)

But we had plans for the veggie garden and poppies weren’t part of it. It has repaid us for over thirty years with wonderful fruit and veggies. 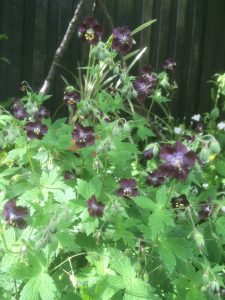 Geraneum Phaem I’m not sure if this is Mourning Widow or Black Widow. The original plant was given to me by my super-gardener friend mentioned last week. It’s amazingly vigorous at seeding and I’m forever pulling out babies.  But it’s delicate and pretty and in my (mainly) white garden, is a super foil.

So that’s it this week from way down under in Tasmania. Do you think I might run out of plants to chat about at this rate?

Please go to The Propagator to see the wonderful global gardens in the comments.