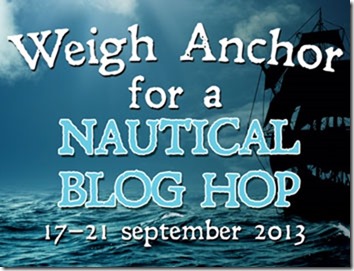 Welcome aboard everyone!  I’m part of a nautical blog hop this week … and I promise to offer you more than just mere ship’s biscuit and stale water on this voyage…

‘The nef’s sail seemed to define my very existence – a small expanse of canvas patched and re-patched so that it could continue on. It seemed I’d been on the sea for months and I despaired ever being able to place toes on land.’ Gisborne: Book of Knights.

When I began researching the marine detail for The Gisborne Saga, I came across two tremendous books:

The books seemed crammed with information and were well illustrated and I looked forward to finding out what sort of vessel would have been most common in the twelfth century. Being a longtime reader of medieval novels it seemed all ships were called either cogs or galleys and there was little further detail.

I took to the books like a ship before the wind but then I began to wallow as if the breeze had died out and left my lateen sail flapping. In fact there was very little of the information I required. Certainly there were images taken from twelfth century coins but true detail seemed reserved for the thirteenth century onward. It also seemed that most cog wrecks under archeological survey were from that later period and most from the Hanseatic fleet.

In further reading from the above books, I discovered that the Third Crusaders were transported in galleys and that there were in fact confrontations between Christians and Muslims off Tyre and Acre. But this next was crucial:  ‘…no detailed information about (crusader galleys) survives before the 1270’s.’

I was directed to http://www.startedsailing.com/cogs-and-other-12th-century-sailing-vessels.html and immediately a whole new world opened out before me, filled with the flap of sail and the creak of timbers and ropes. I discovered the redoubtable Han who was so kind and fielded questions from dozens of writers about ships, sea transport of horses, about travelling between Bordeaux and Bilbao, of journeys from Zara to Alexandria. I felt as if I had discovered a goldmine. I asked my own questions and Han told me that a nef was the most likely vessel for my purpose in the first instance. I also noticed amongst the many questions he fielded from other writers that he put paid to the idea that cogs sailed the Mediterranean en masse. He claimed they were ships from the Friesian and Saxon parts of what we now know as Germany and the Netherlands and that they barely ventured further southwest than London.

One might ask why I chose to accept the information from doughty Han and not less forthcoming information from other learned sources. Ultimately it came down to two simple facts. Firstly I was writing FICTION.  And secondly, I liked the idea of the nef. It was quirky and to me a perfect type of vessel for the idiosyncratic ship’s master I had in mind. My ship was a weatherbeaten nef with a square sail, a fore and aft castle and a side rudder. Her name became the Marolingian and she was was crewed by a small collection of men from the maritime coasts of Europe. She became a character in her own right and in the name of all that is exciting fiction, my feisty ship’s master took his nef and sailed it right into the Mediterranean, sneaking along coastlines and generally being conveniently where he shouldn’t.

But deciding on a vessel is all very well. How does one make it real? Particularly a twelfth century vessel about which there isn’t a great deal of detail? This is where my own boating life comes into play. Until my grandfather died , I spent much time on his 38 foot wooden yacht called Wanderer. I slept on old canvas sails that smelled mildewed and salty. I would lie in the for’ard cabin listening to the water lapping against the planks if we were at anchor, or creaming along the sides when we were under way. I rowed the clinker-built tender and felt the smoothness of ages beneath my palms and heard the squeaking of oar in rowlock. I would listen to the crackle as sails were raised, the clack of rolling shackles and the almighty snap as the canvas filled, the boat leaning off a good wind. I would sometimes hang over the sides of the boat when we were at anchor and in that calm patch at the waterline, would look into another world of strangeness and great beauty. I would sit with my back against the mast, facing into a good breeze and roar with joy as the spray whipped over my face and the boat slewed off a wave. In later years, I would remember the pain of a fractured rib after a catamaran on which I sailed nosedived and pitched me into the stays with great force. And so much more  – the shivering cold, the funereal cry of seabirds, the unadulterated happiness of boating with dolphins. The sounds of waves, the sigh of the wind through the shrouds, the sight of night-time phosphorescence like pure white lace in the moonlight. But best of all – memories of diving into the water and under the hull as a child, marvelling at what floated above me.

And of course, nothing changed as I grew older. Merely the desire to be in or on the water when I could and to soak up the experiences like a sponge.

Thus I hoped all these experiences would suit the odd shaped, strangely fitted boat that was the nef in my stories. She  really showed her colours in the terrifying journey between Scylla and Charybdis in Book of Knights.

Come aboard with Lady Ysabel, Davey, Eli and Young John and see for yourself…

‘Hut, hut,’ went the chant and my heart beat with the command. The nef slid over the water as if the sea were a piece of D’Aumiers silk. But slowly Sicily and the coast of the mainland began to enclose us – rocky escarpments falling into the water, the sea itself funnelling with increasing strength through the strait.

It was possible to feel the pull and bite of the two angry mistresses now, the hull buffeting, and I stood, threading my hands through Eli’s rope, tying myself to the solidity of the spar. Courage was not as encompassing as I would have Davey believe as the water seemed blacker than Hades, circles flattening out as we approached, swirling on either side of us – whirlpools that might be our downfall.

I hated the way they bit and grabbed, pulling the keel this way and that. I could imagine the ‘nef’ crying out as it almost bent in two.

‘Hut, hut!’ Davey kept that insistent rhythm but the rowers barely needed it as they dug deep, keeping the vessel on a straight course, neither to right nor left, defying the crazed tug of the tides. ‘Hut, hut!’ The water ran slightly roughened, but nothing like the fierceness of what fought beneath us as the two tides bullied each other and us.

The boat groaned but the crew would have none of it and with each pull, they yelled ‘Hyar! Hyar!’ Almost as though they were whipping a horse through a maelstrom. If I had any doubts about their courage, their sheer physical power, it was put to rest as the rope bit into my palms, the boat trying to swing and me like a piece of flotsam. I longed to hunker down, to shut my eyes, but that was surely the coward’s way and if these men had to row with their backs to their enemy, then the least I could do was keep my gaze up front watching the water, and turning every now and then to gain reassurance from their grit.

The note in Davey’s voice was shrill and I held my breath as I saw an ugly whirlpool in the middle of our course.

The oars dug, the boat slewed, tipping to the larboard side, the water rushing over the sides.’ Gisborne: Book of Knights

(For purchase of Book of Pawns and Book of Knights, click on this link)

Thank you  so much for joining me on the decks and…