‘They sailed away for a year and a day…’

My love of boats began as a child and my attitude toward boats is rather like Ratty’s: that ‘there is nothing – absolutely nothing – half so much worth doing as simply messing about in boats…’

But perhaps I should qualify that.

Whilst I love being on rivers and round the coast, the idea of tackling something like the Sydney to Hobart Yacht Race in the vicious Tasman Sea and Bass Strait is a step too far. Mind you, in my youthful late-teens/early twenties, myself and other friends all thought seriously about putting our names down to be the ‘Return’ crews, sailing the racing boats slowly back to Sydney. Ha!

The race began in 1945 – a small race of nine boats taking six days, fourteen hours and twenty two minutes to complete. These days, with the flying maxis it’s a question of a day and a half. To my romantic soul with memories of Rani, Freya, Ondine, Ragamuffin, American Eagle and many others, a lightweight capsule with high tensile rigging and space technology sails loses something in the translation. I don’t deny the skill, the design and technology and the bravery of the men, but I’m old fashioned, I guess. 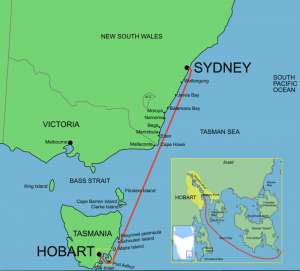 In the past on Boxing Day, we’d put the radio on (and later the TV) for the broadcast of the start in Sydney. And every evening at the end of the ABC News we’d all watch the Sydney-Hobart Report where a map and little name tags would indicate latest placings. 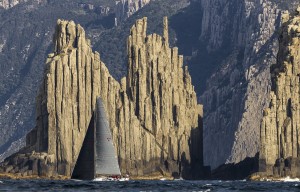 Two of my cousins sailed in the race through the years. Not once but repeatedly. One broke his ribs in the race at the same time as I fractured one of mine sailing with friends on a catamaran in Spring Bay. It nose-dived and we all flew through the air and I landed on either the mast or boom.

As an adult, the race always held a mystery and one year, my friends and I sat on American Eagle with a young and friendly Ted Turner. 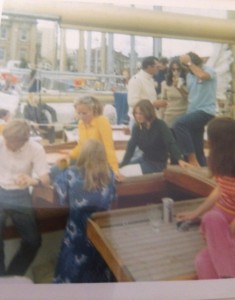 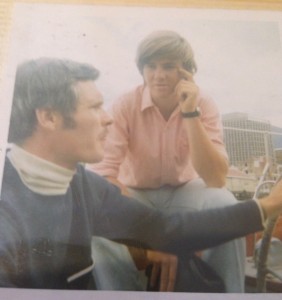 He’d won the race and we had a ball talking about the race, and about his life in America. He was fun and I often pinch myself that we sat chatting when he would later become a media mogul and marry Jane Fonda!

In 1998  the most horrendous weather conditions in the history of the race killed six yachtsmen. As Wiki says: ‘Overall, the rescue efforts involved 35 military and civilian aircraft and 27 navy vessels, and proved to be Australia’s largest ever peacetime rescue operation.’ It was utterly tragic. 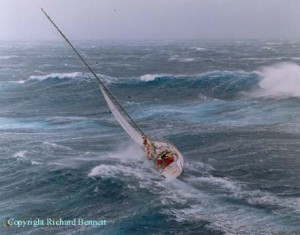 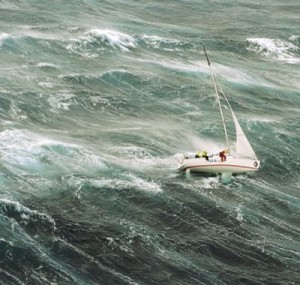 That particular race produced a book, “The Proving Ground”  , which examined the mind of offshore yachtsmen and the disaster that ensued, and over the years, many documentaries have been made detailing the magic of the race history. Which is why so many folk wander to the docks and walk around the marina to look at the flying coffins that sail this race every year come Hell or high water. 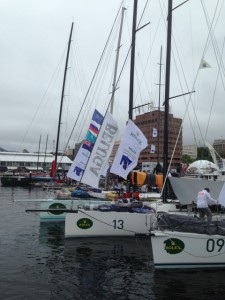 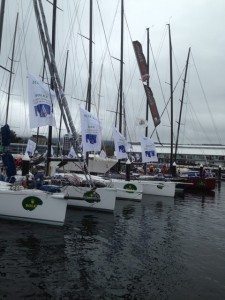 It’s filled with images that stay with you – brown faces creased like badly tanned leather, hair tips bleached and stiff with salt, hairy legs in mid-length shorts, faded leather boatshoes, red overalls draped over booms, safety yolks lying over the wires, sail bags either filled or waiting to be filled with dried and folded sails. Families calling to loved crew. 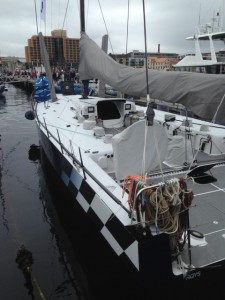 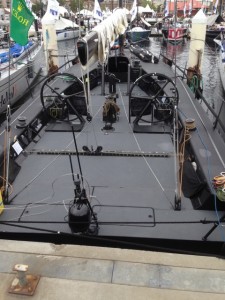 And beer. Lots of beer. 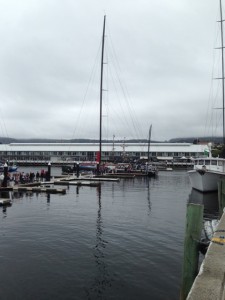 Tonight, my husband, dog and I were walking along the foreshore and yachts were finishing – running up the river with a light sou’sou’east breeze. Much shouting came from one yacht as they endeavoured to pull in the jib/genoa (dropped into the water) and raise a spinnaker which wouldn’t set as they flopped off the wind so that the bottom edge dragged in the water and pulled the boat over. Four letter words flew on to shore as they tried to set the spinnaker more successfully and finally the air caught it, they hoisted it another quarter of a metre and off they flew, leaving people on shore laughing at the salty language.

But we were the landlubbers, we were the ones living vicariously through the sailors – I’m sure most of us felt just the faintest twinge of envy as that yacht lifted on the wave and raced to the finish line.