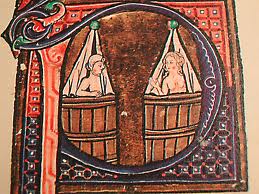 Recently I noticed a review about one of my hist.romances which claimed some degree of anachronism – did people really bathe that much in the twelfth century? In fact my reading has shown there is a complete disparity of opinion over this issue, which meant I must make a choice. I did. I was writing fiction and I chose the scholarly fact that best backed what I wished to say.

I was also taken to task for using the word ‘puke’ because its roots are in the seventeenth century, which I knew. But I needed to imply a middle-aged woman vomiting up her insides on a ship journey. I could have used the word ‘vomit’ but even that dates from the fifteenth century. Exactly what words did they use for such a bodily function in the twelfth century? To substitute a word in Latin or Norman French or Occitan wouldn’t work at all. Nor would it be sensible in my opinion. So ‘puke’ it was. It’s powerful, short and sharp – exactly what this poor woman was experiencing. My feeling about language is that there must be a certain amount of leeway, especially if the story is enjoyable and is loyal to its timeframe. Then again, I suppose I could re-write the whole novel in Latin or Norman French… Such things make me wonder why we can’t be more flexible both in reading and writing historical novels. Which made recent commentary by R.Clifton Spargo about the writing of the genre just the exact thing I wanted to hear: « Why this legend?
Life’s just black and white… »