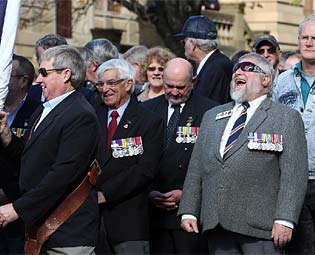 The day that truly personifies all that is Australian – mateship, bravery, selflessness and…

I attended the March a few years ago wearing my Great Uncle’s medals. He flew missions in Papua New Guinea  and was the incentive for Dad joining the RAAF.

Dad was based in Northern Australia during WWII and his medals are hiding, perhaps with the Defence Force Honours and Awards Office and we have yet to source them (we have just started the process). I stood at the end of the March near the Cenotaph and remember feeling quite weepy as I saw the diminution in numbers from my father’s era, let alone other eras.

But the real tears came when I saw the Vietnam Vets – MY generation – many forced to fight in a war that wasn’t theirs, by the simple expedient of their numbers being called for National Service. They returned to less than a hero’s welcome and I hate that men forced into that position should have been so dishonoured. When I was at University, one of our law students and a dear friend newly returned from Vietnam, organised a march to support those still in the theatre of war and those who were returning home. I walked in that march for those men and along with the rest, we were pelted with flour and foul epithets.

Of course, it’s different now. We get out there and we clap and cheer as they march past. And so it should be, no matter the politics.

So today, it’s ANZAC Day again and this year my son, husband and I along with others from the surrounding countryside, went to the dawn service on our little stretch of the coast.

I think it’s amazing that in every town, village and great city in Australia and New Zealand, there is an ANZAC March and services to honour our servicemen throughout our young histories.

In this little village, a coastal fishing port called Triabunna, they too ‘remembered them.’  Bitterly cold, there were about seventy folk of all ages from very elderly to young toddlers. As we stood in the minute’s silence all one could hear was the clink and shake of medal against medal as people shifted on cold feet. As the vicar began to speak and just before The Last Post was played, a neighbouring rooster crowed, letting us know that the day was beginning and that everything old was new again.

After the ceremony was over, the returned servicemen and women went to a special breakfast in the council chambers, some went to the local pub for a belly warmer and we climbed back into the ute and drove back to House to try and thaw limbs that are so unused to the cold.

I’m glad we went to the service. It gives one pause. In every little outpost of Australia and New Zealand there are small war memorials with names of men and women who never returned. They deserved the honour.

The medals that we wear on our right breast… above in the harsh light of pre-dawn street lights and below, in their polished and cleaned glory.

My dad in his gorgeous flying jacket. Being dad and too honest and upright for his own good, he returned the jacket to the RAAF on ‘de-mob’. What I would give to wear that now! It’s SO fashionable, let alone the emotional significance!

The chaps dressed for action…

My dad’s RAAF beret and sunglasses which he was allowed to keep. I think they are so cool. Boogie woogie bugle boy and all that!