‘Lucia, the Doge will ban you from the Ball if you handle the falcons once more.  How many times do you have to be told it’s a man’s sport.’

‘As many times as you have to be told that your damned cravat is perfect!’  Taking up the third stiletto, I flicked again.  The needle-sharp blade landed with a discreet ‘flack’ in the groin of my target and I turned to Percy who hastily crossed his silk-stockinged legs.  ‘A fig for the Doge!  My dear Signora Seroni and Signora Sarina have been solicitous but I can see Neroni has enormous problems with Vittoria.  I swear that girl’s petals will be plucked before she even gets to the Ball, she’s such a free spirit.’

‘Somewhat like you . . . ‘  Percy has an unmistakeable irony when he wants but I pretended to ignore him and continued whining for it suited me to have a self-indulgent moment.  It was either that or rip my stiletto target into shreds in frustration.

‘And dear Sarina seems weighed down with a secret which she won’t impart, saying she and Hugh need to solve it together.’  I noticed Percy’s eyes glitter in that way they do when he has secreted a choice morsel of information, but before I could think on it, he had grasped my hand, pulled me out the door behind him as I frantically reached for my hat, and into his waiting gondola.

‘To the Museo,’ he ordered the gondolier.

‘Aine Percy! I’m not up for stuffed animals and knowledge.’

‘Sink me Lucia, neither am I.’  He gave me that enigmatic grin.  ‘I seek information, not knowledge.  There’s a difference.’

We walked the marbled halls, past luscious statuary, florid art and cabinets of such entymological elegance, one should have been breathless.  In addition, Percy took such long strides, it was all one could do to keep up.

‘Keep your eyes peeled, Lucia.  I’ve work to do.’  He turned sharply into the Hall of Enchantments, that wing of the Museo given over to the history and culture of Others and my backbone rattled like a string of dried chillies.  I thought I heard a noise and turned quickly and caught the shine of light on black leather and dark flowing hair and cool eyes appraising me,

but then I blinked and there was nothing.

Just the feeling that a ghost may have walked on my grave . . . spooks, Percy calls them, but tells me that it is a name they use for spies as well. 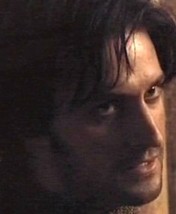 As Percy began to extract fine wire from his coat and as he proceeded to pick the lock of the cabinet in front of us, I wondered if I had seen a real spook, or an imaginary one or if I had in fact seen the face of my future escort lurking in the shadows.  And then I realised what Percy was reaching for in the unlocked cabinet.