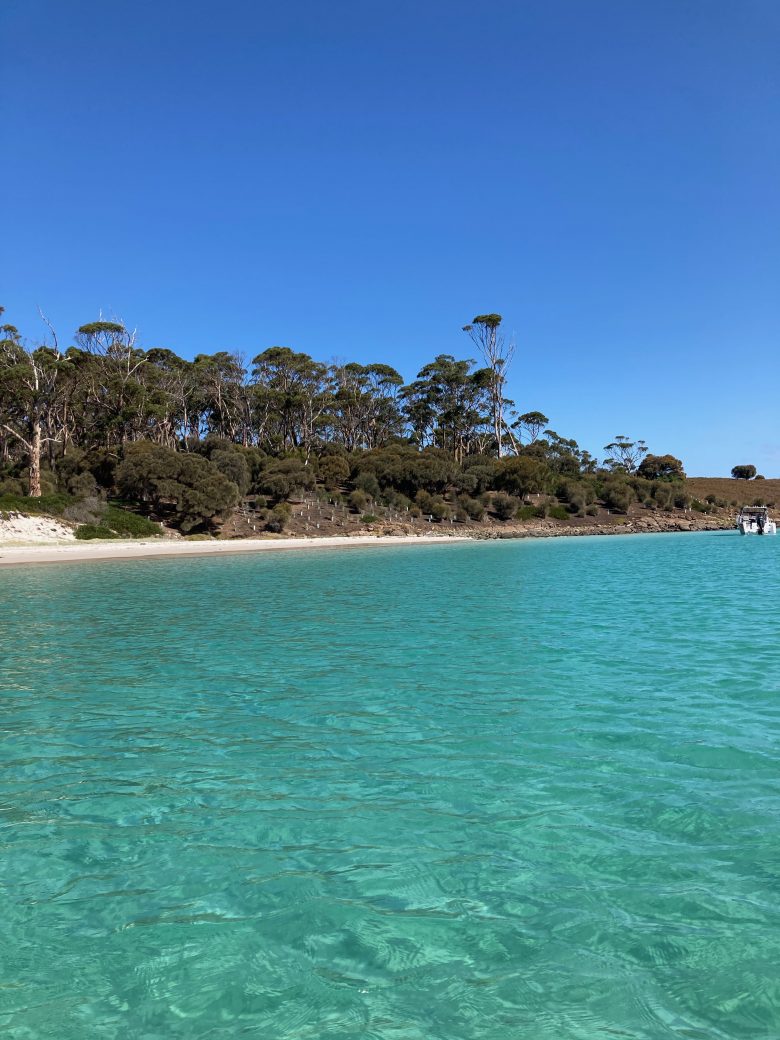 Sometimes days are sent from the Gods.

Mind you, when we woke it was beset with grey cloud that sat on one’s shoulders like depression, while a southwesterly breeze snapped at our bare legs.

So we wafted around the house: me editing, him working and the Dog sleeping off a vet’s visit from the day before.

Slowly the grey dissolved and I looked at the sea and thought, ‘What if this is the last chance to go boating before the autumn gales.’

One does that as one ages. ‘What if’ ‘last chance’ – all that sort of hoo ha. 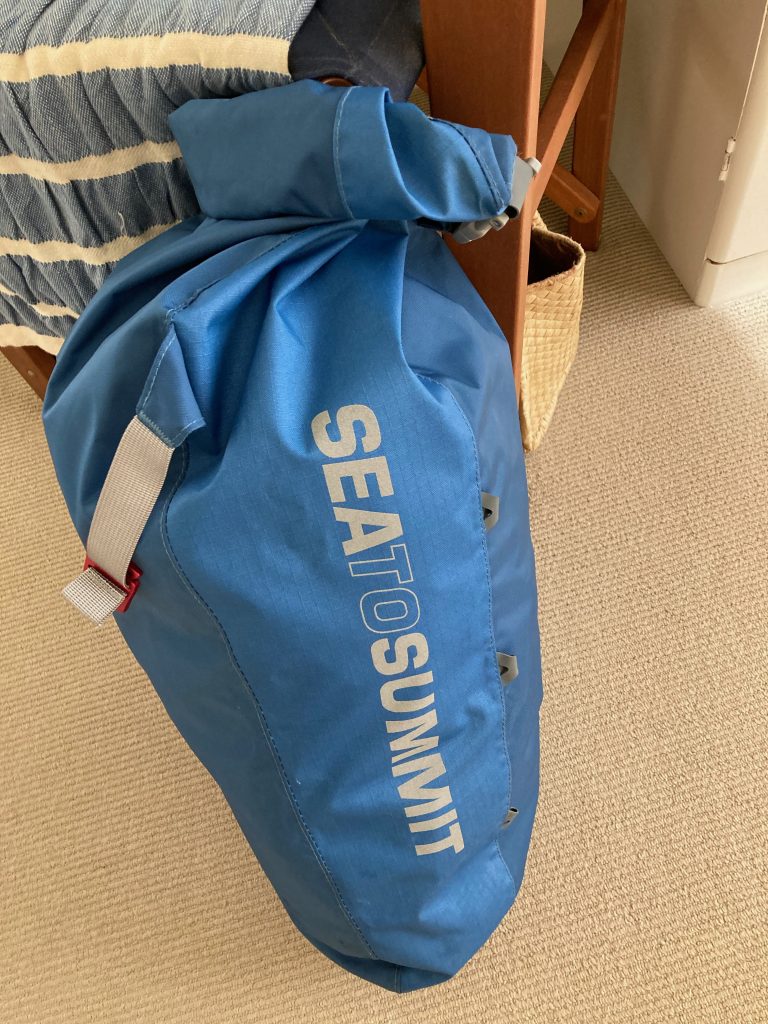 We packed our old wicker basket with sandwiches, cheese, fruit and nuts, some chocolate balls and a thermos of tea. Loaded the kayak into the boat and cast off across the sea – across that stretch of water called Mercury Passage and which features so markedly in a book I wrote and which is called simply … ‘Passage’.

The day burned off to a cloudless blue that I find I can never describe. There is no ‘blue’ word that does it justice. All clichéd. The wind had dropped away to ten knots and so we took our time. 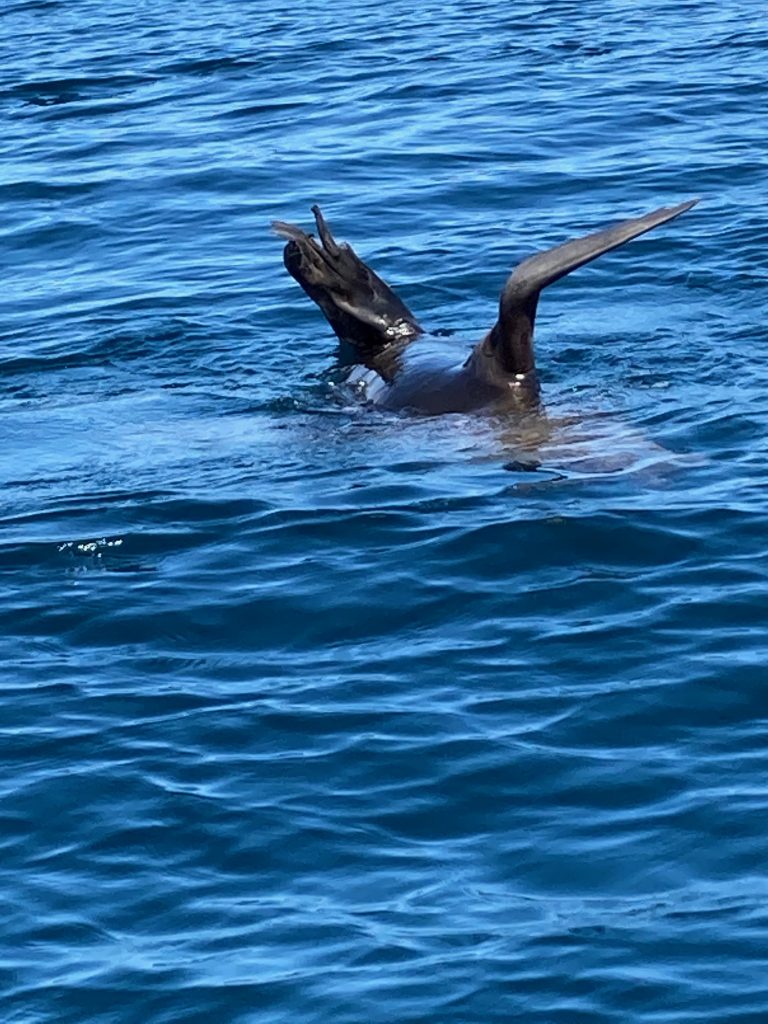 We watched a sleeping seal – he had rigged a for’ and aft flipper in the air. That way, he could monitor changes in wind and current. How seals do this AND sleep is a wonder but they shut down half their brain and rest mindfully, apparently.

Can we do that? Maybe mothers do… 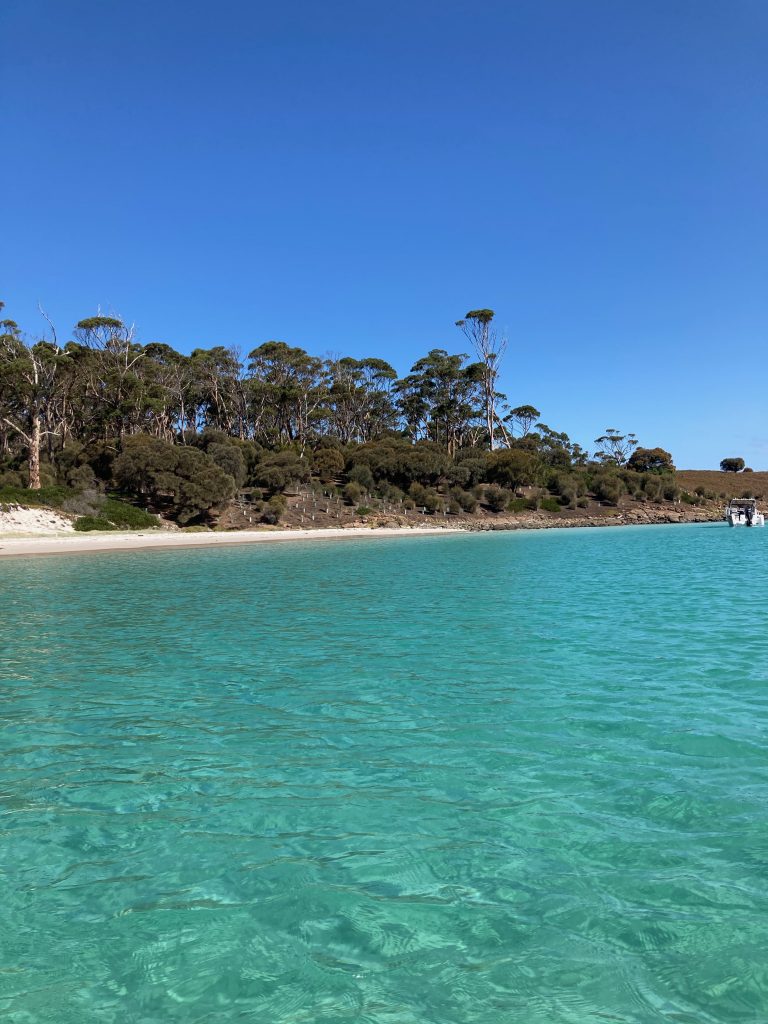 We ambled down the coast. The sea and sky met on the horizon and to our port side, the rugged shores of Maria Island sat in the most perfect post-midday light. Where every fold of the hills, every sharp crag, every rock of the escarpments stood out in livid detail. We anchored in a a place called Four Mile where the water is the colour of the finest aqua glass, where you could see krill if you had super eyesight, where tiny fish floated between the sea fronds that waved in a languorous jive in the swell.

We picnicked and as we ate, caught sight of a pod of dolphins feeding inside the scallop lease, a way out to sea. A no-go area for boats but apparently for sea mammals, not so much. They breeched and splashed, and birds dived all around. I wished my phone’s telephoto capacity was stronger as it was such a photo opportunity. And then later, as we finished lunch, a white sea eagle, my favourite bird (and my lucky totem) flew toward our mooring. He was low to the water and we decided he carried a fish. He flew round the rocky point to a tree and we heard him later, as we dropped the kayak in. 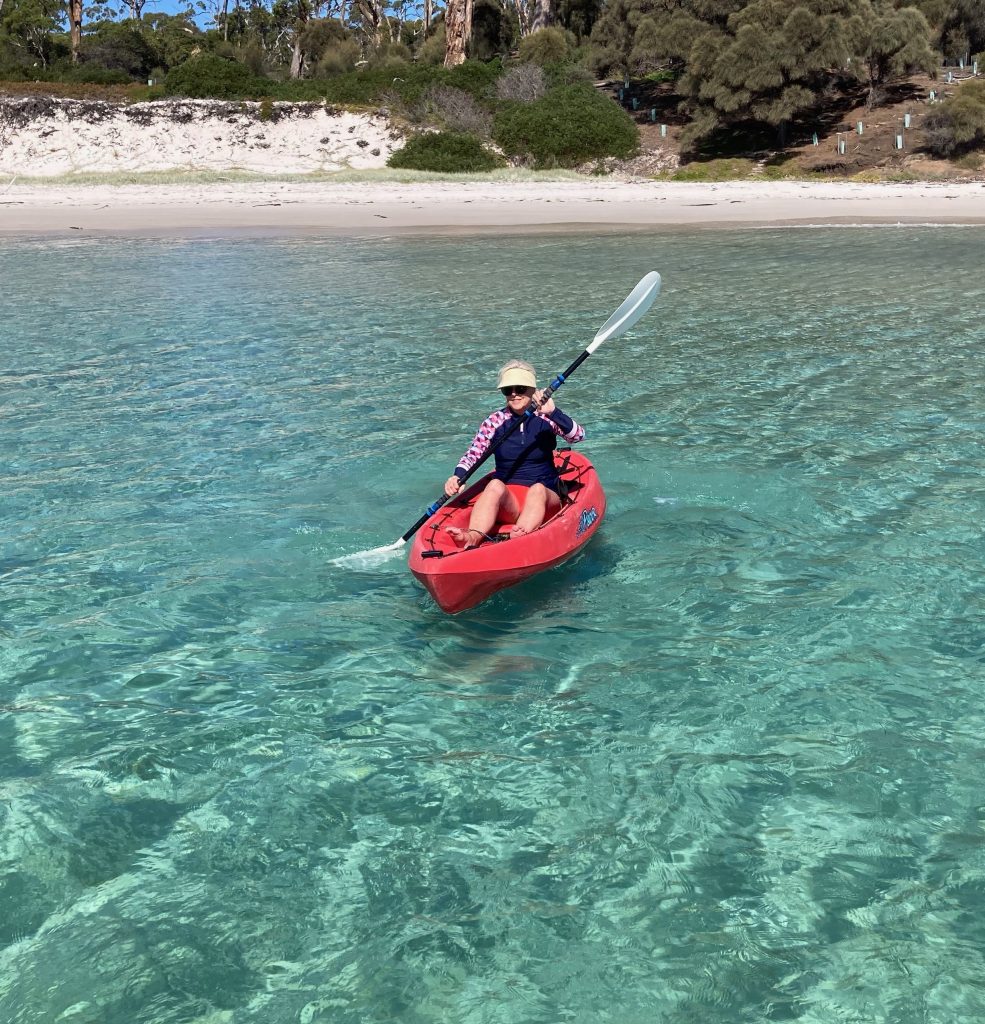 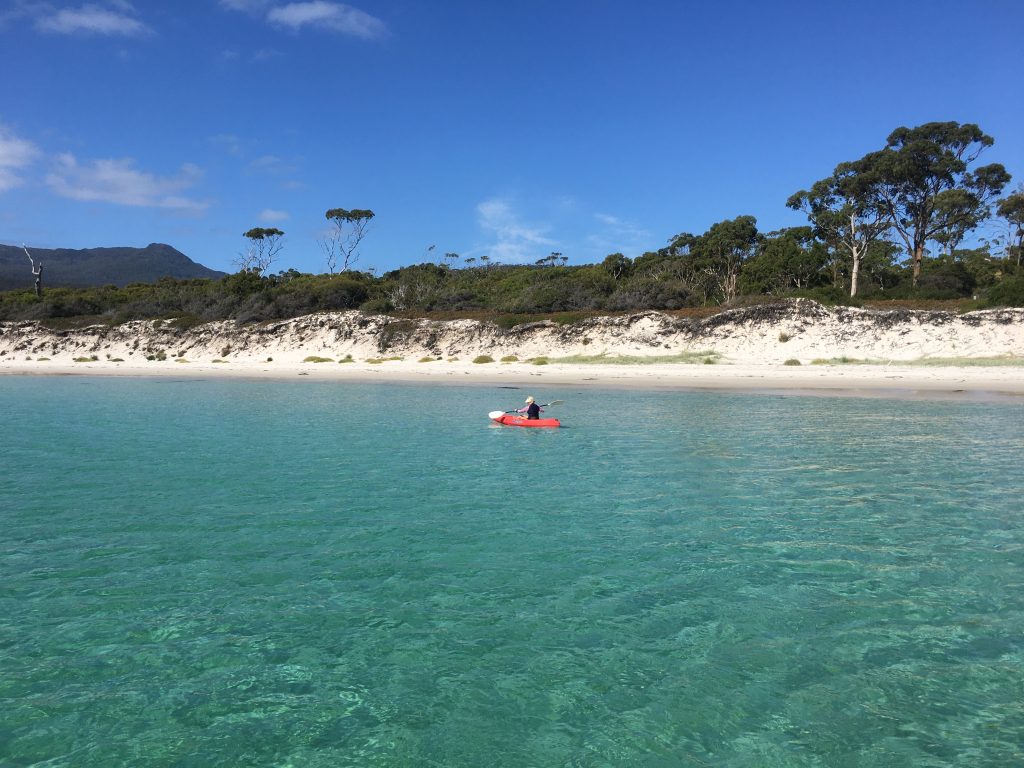 I paddled because the water was so clear it was like floating on air. 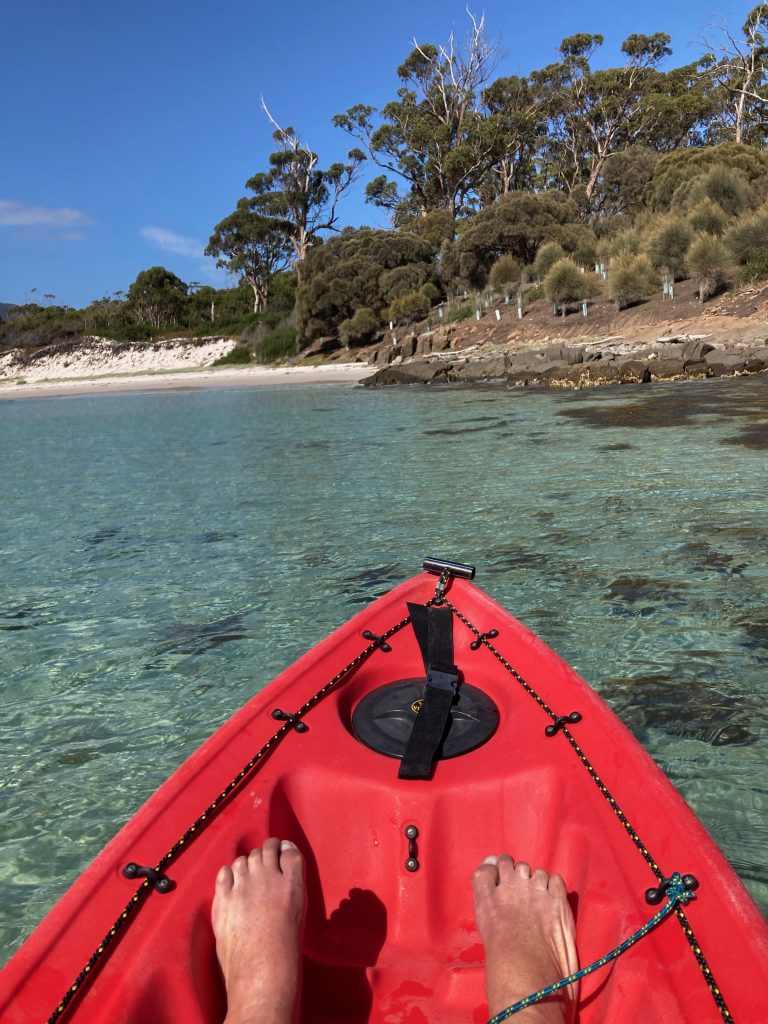 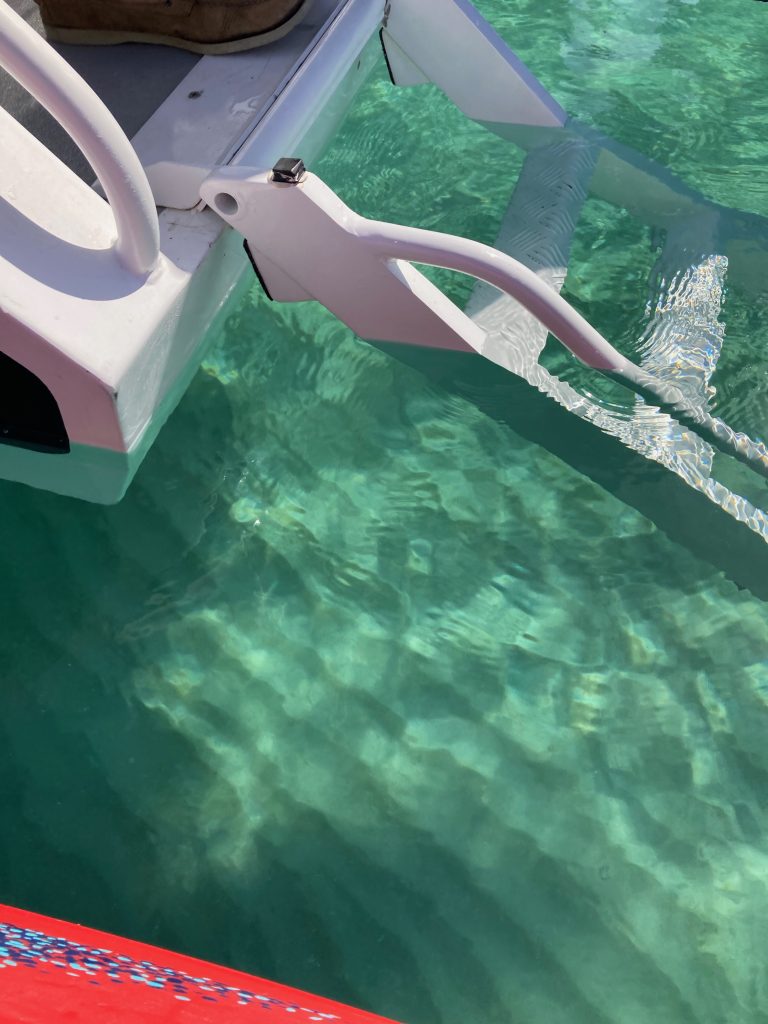 I love autumn – I love the crisp nights, the warm, sunny days, the crystal and amber light, and (at the moment) the lack of wind. 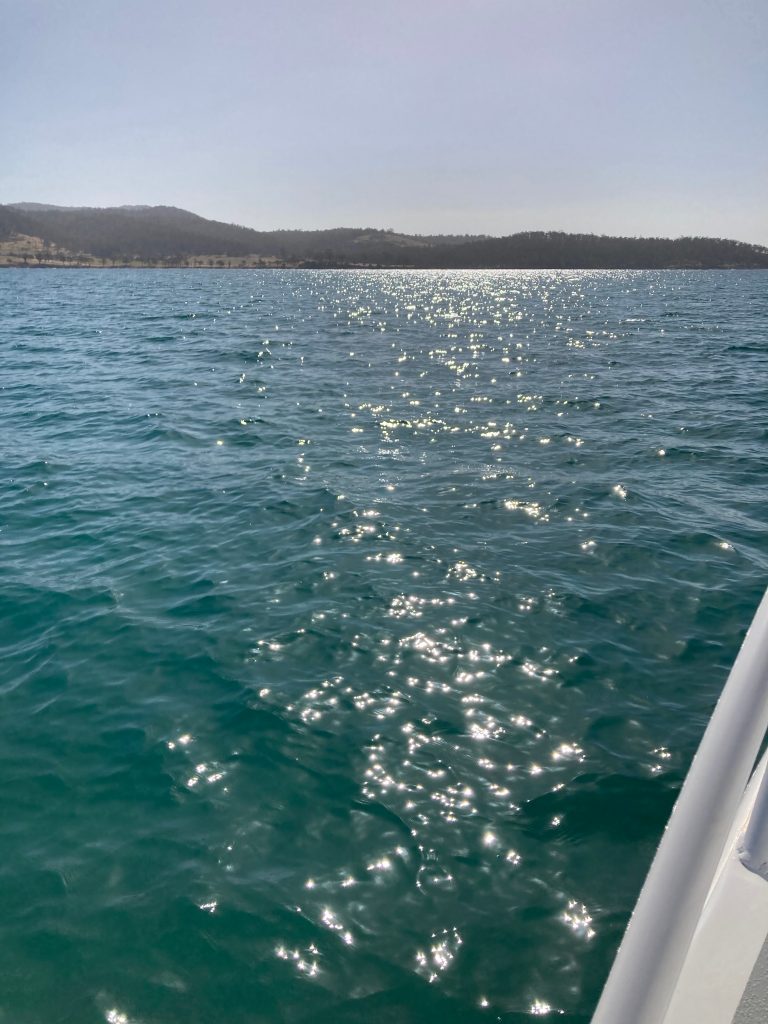 Today was honestly sent from the Gods…