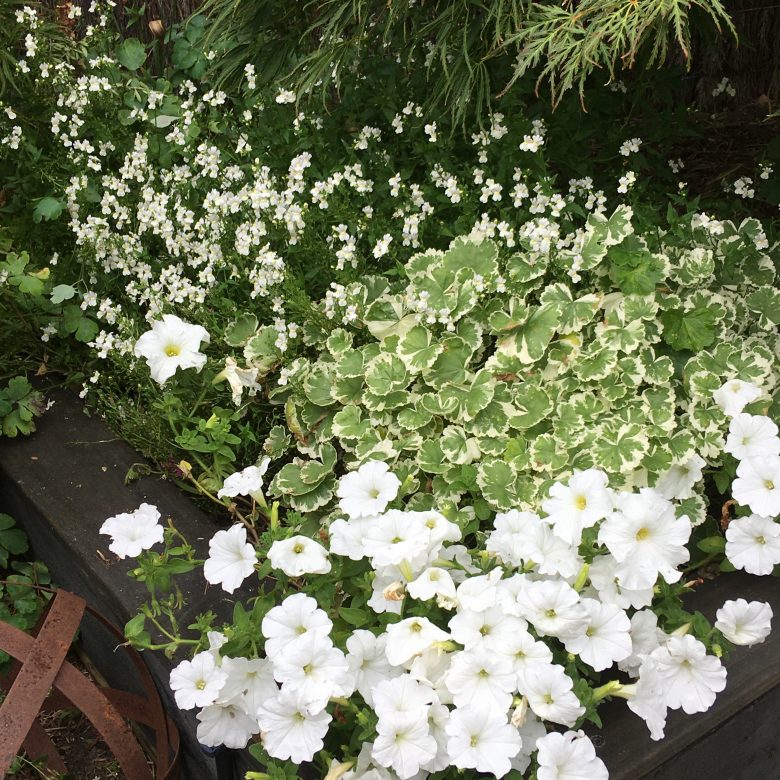 Our big garden is tired and begging for autumn to arrive. We’re in the tail end of meshed weather systems today and the humidity is tropical. Rain is falling and the waves are crashing on the beach. The garden needs a good fertilise and for the windiest summer for ages to cease. Hopefully next week I can post on how it looks but in the meantime – on Thursday I was in the city and took some pics of our little Matchbox garden… They show the extent of the tiny space and how we’ve tried to turn it into an escape from the bustle of the city. 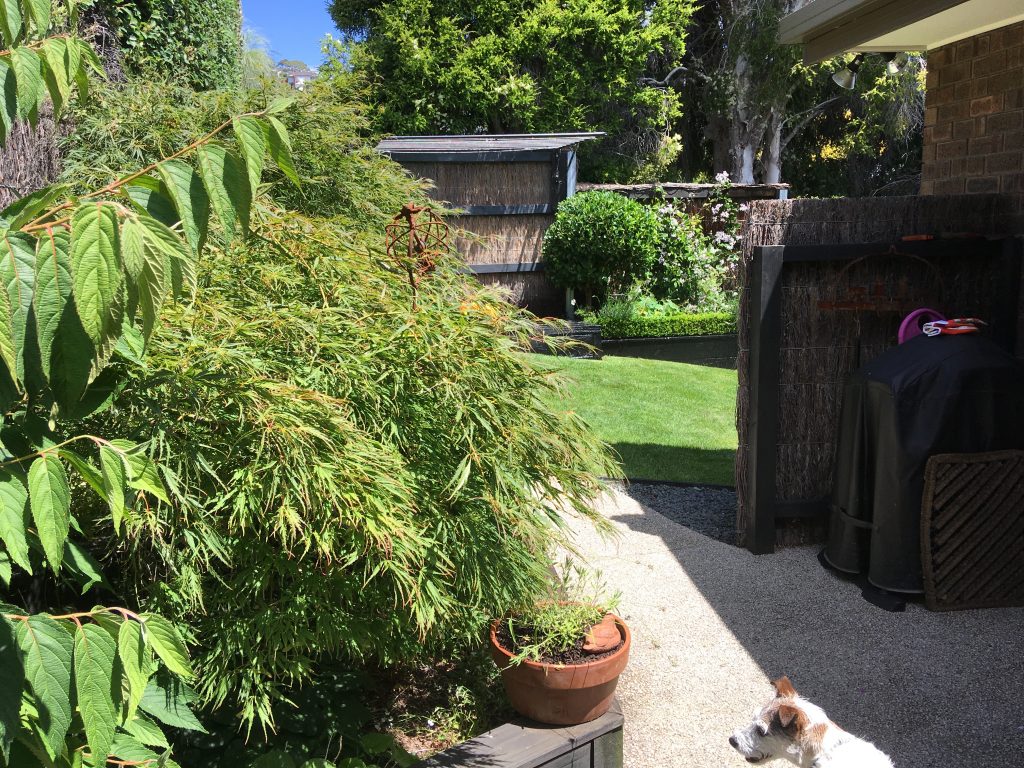 The first image is looking from the back path to the largest space of the garden, past the BBQ. 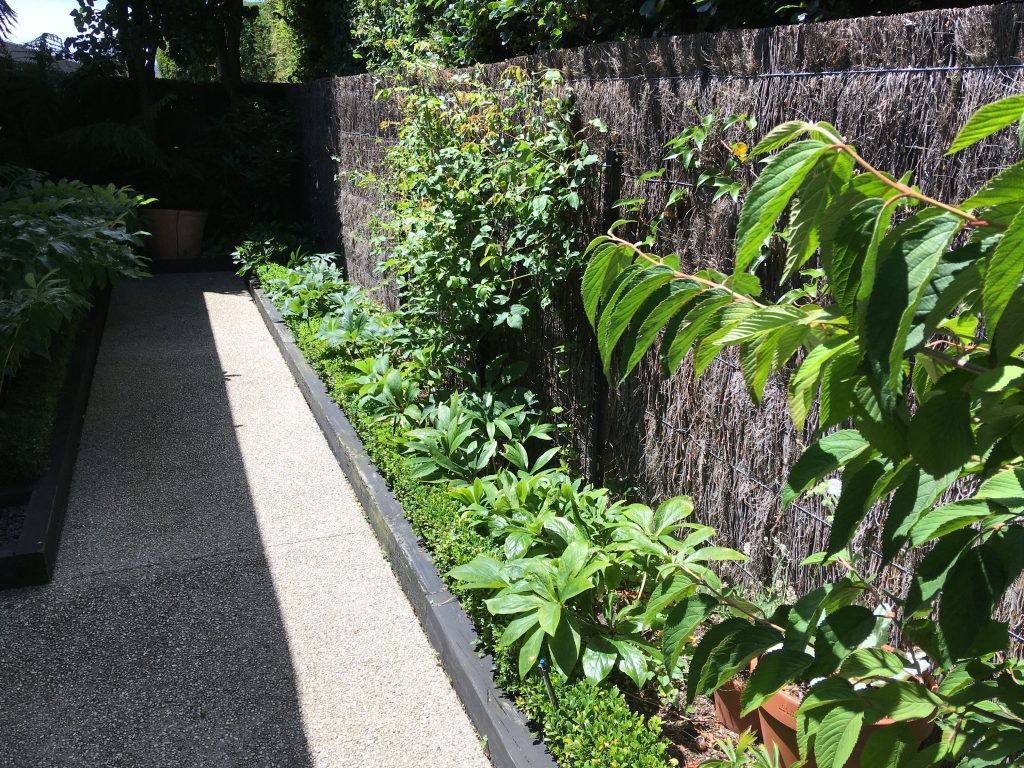 The next is looking along the back path to the side fence. Manchurian pears, ferns, a rhodo, a climbing rose and two white clematis of different varieties. The mainstay of both sides of the path are my special hellebores, along with miniature white cyclamen. In summer there’s a vast row of Solomon’s Seal against the house wall. The massive hedge behind our fence is filled with shrubs from the government’s list of noxious shrubs like cotoneaster and mirror trees and by rights they should be grubbed out. But as hideous and rampant as the hedge is, it affords us huge privacy from the  townhouses on the upper level, and we keep our side rigorously trimmed. 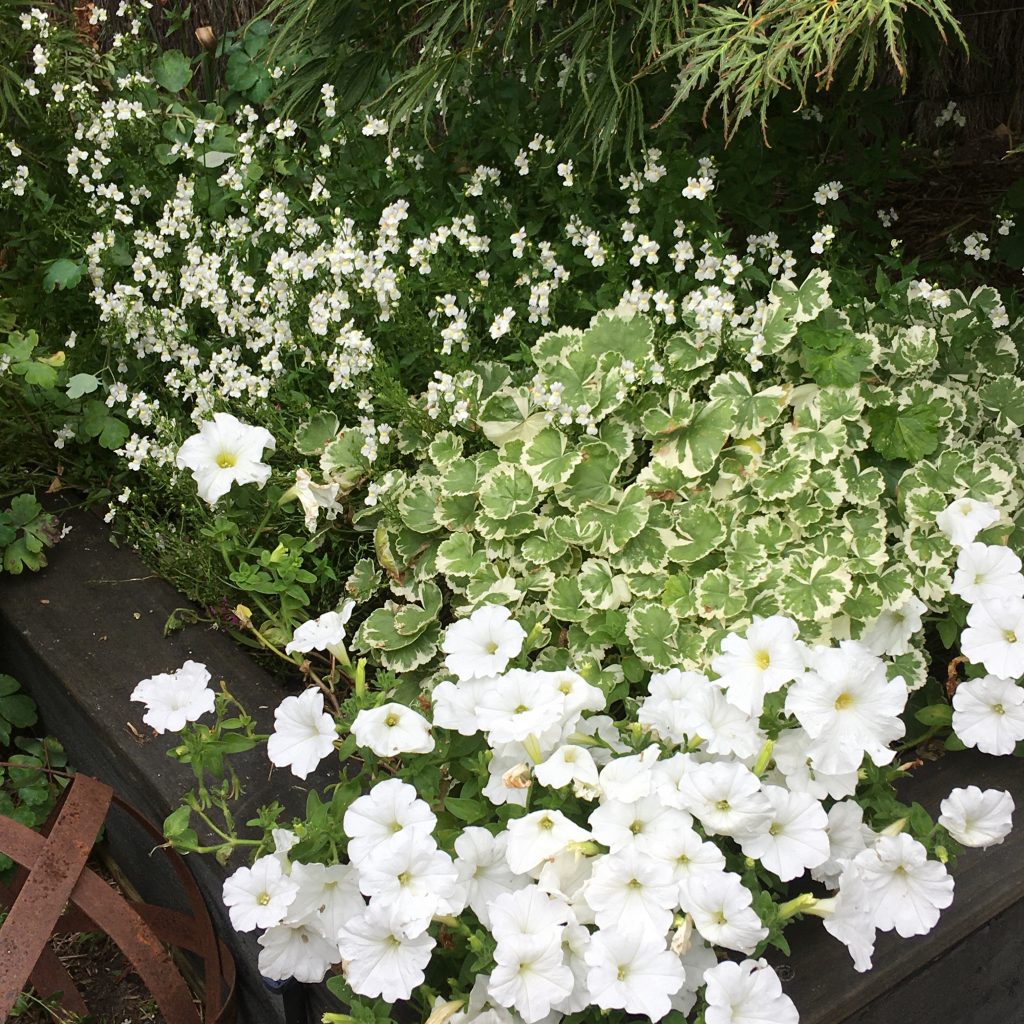 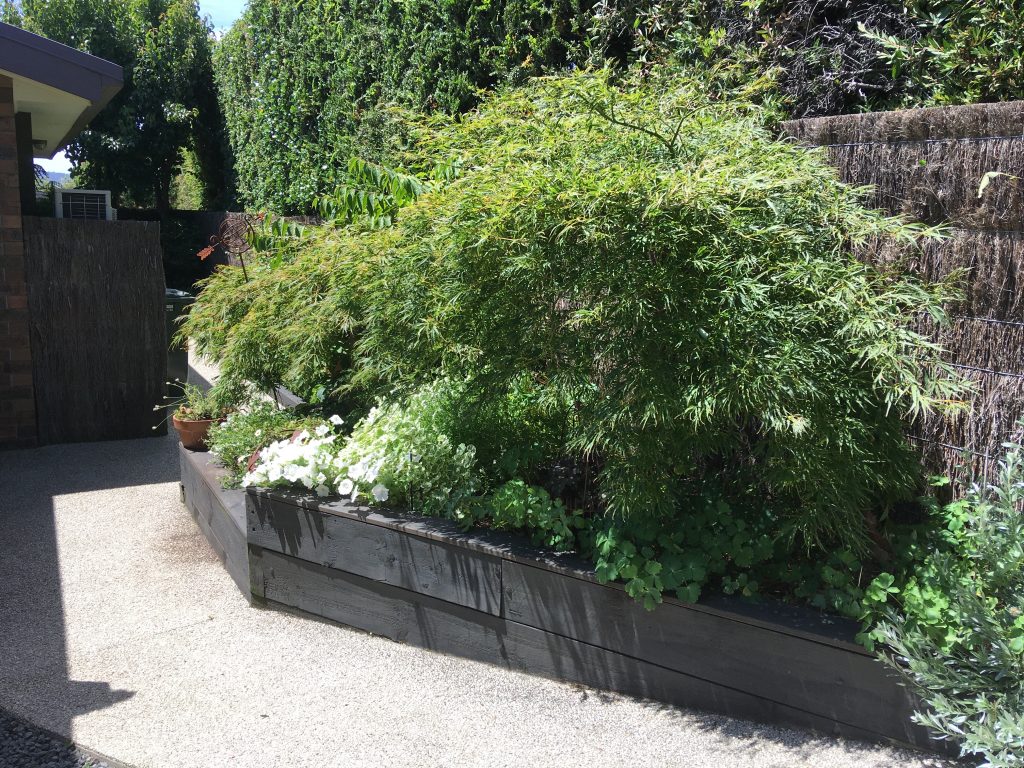 The third image(s) is/are of the meeting of the two raised beds that directs one to a street gate or off the path to the lawn. White nemesia and variegated geranium, explode onto the edges of the box beds while perennials of white and black bearded iris and aquilegia grow at the back, two standard dwarf weeping Japanese maples provide visual interest and there are many other perennials, enlivened in summer by white petunia and in winter by white primulas and primroses. There’s also a pic looking from the tall gate down to the box beds. 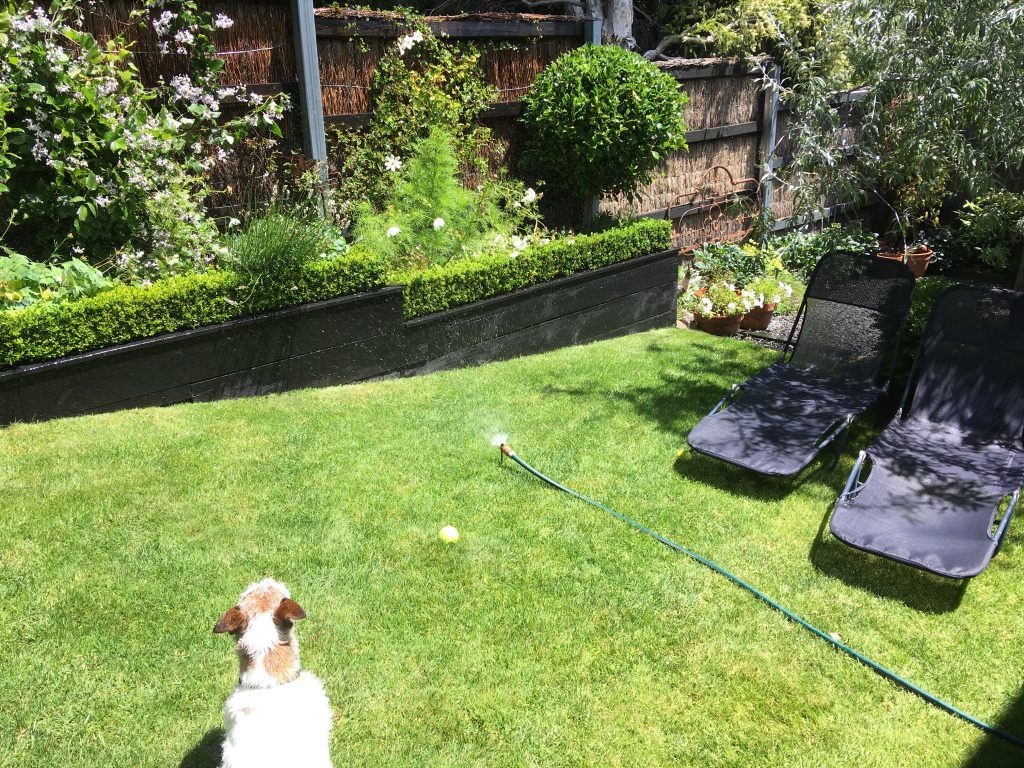 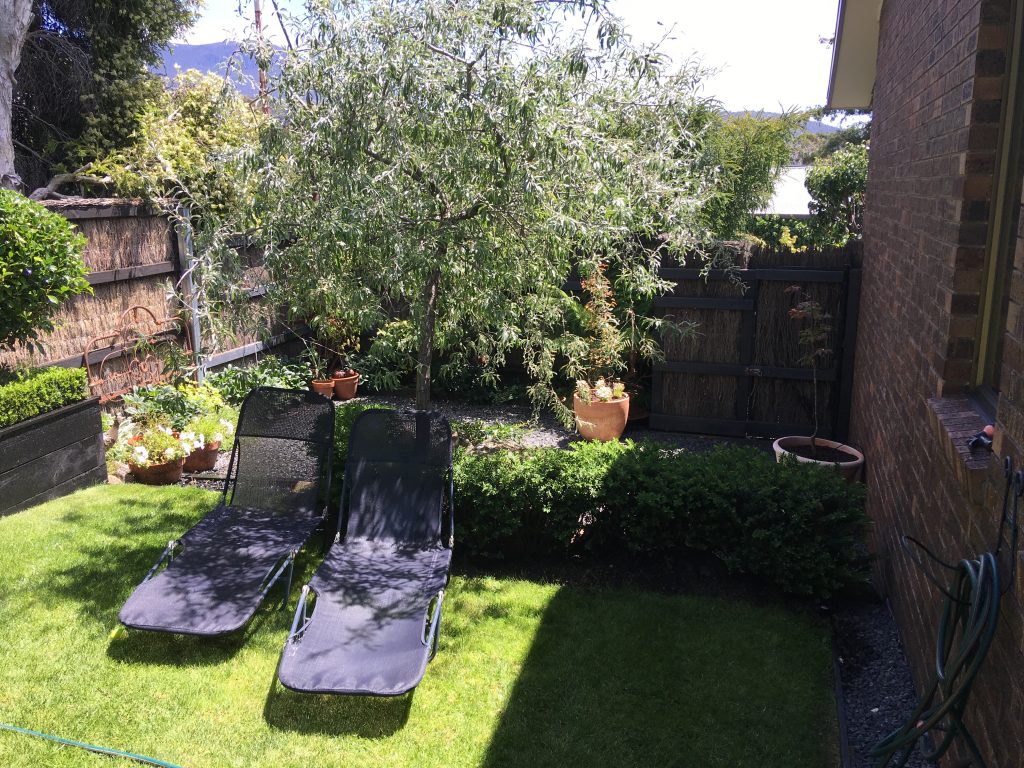 The fourth image is our relax space. It’s divided into a lawn on one level (mainly for the dog to sunbake) and a blue metal space on the lower level. We introduced the blue metal because no lawn would grow in the dense shade of winter. It gave us a chance to introduce all year interest and we make a central feature of a large pot with clematis growing on a tripod and with seasonal annuals around the roots. Also, the gravel makes the most satisfying crunch as we walk across it. This ‘room’ was my husband’s idea and I confess to being worried that it wouldn’t work but I LOVE it and it suits our needs to perfection. 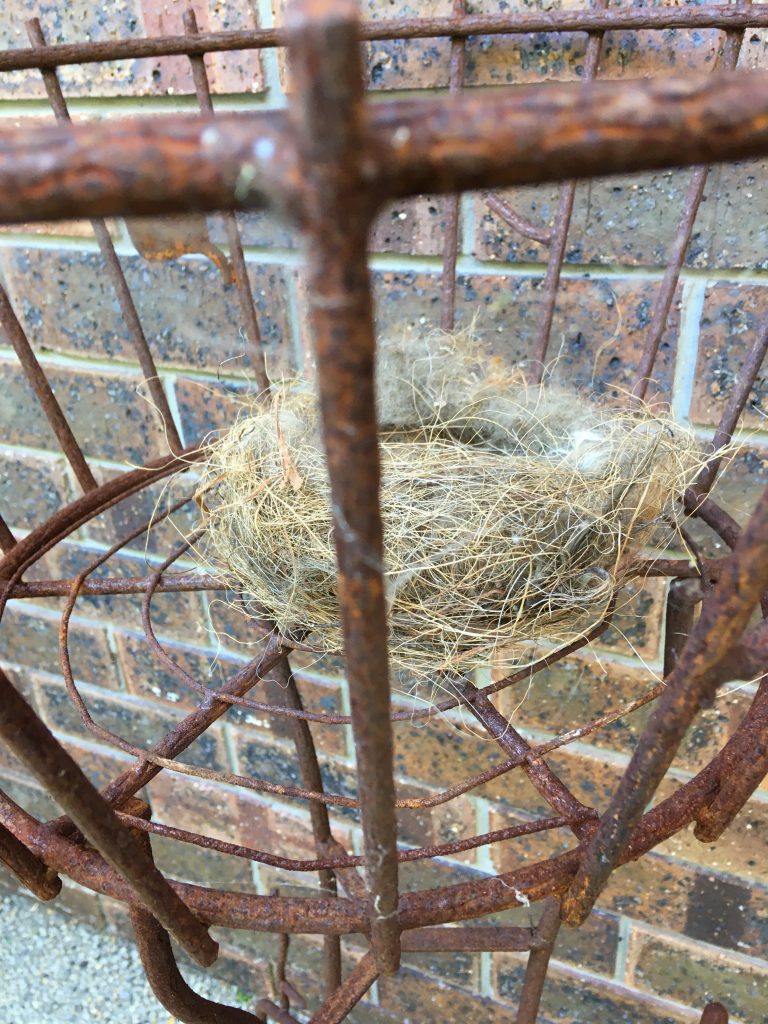 Image five is a nest that blew down in the harsh summer winds and which is currently sitting in an empty pot stand. All our terracotta pots are in shaded areas where the watering system keeps them moist in summer when the garden must mostly fend for itself. 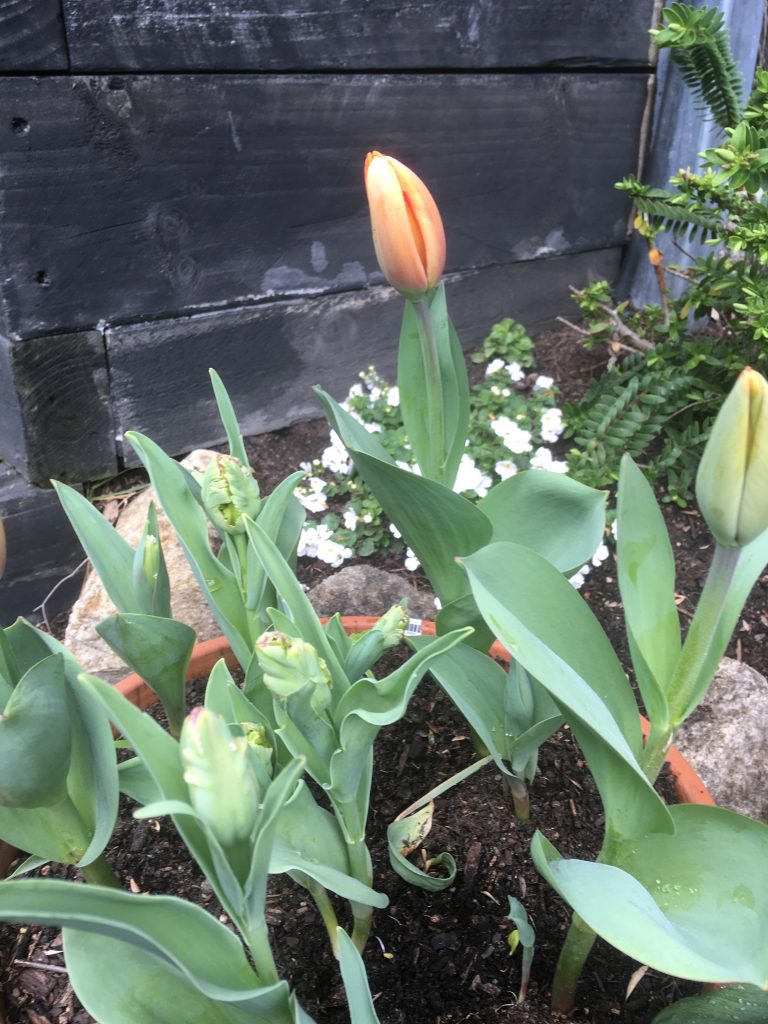 Image Six is from my files so that I can mention the bulb catalogue finally arrived. I only plant my spring bulbs in tubs so there’s a finite number required. But I’ve stuck with white, orange and black which worked a treat last year. I kept all last year’s bulbs as well – lifted them after flowering and before the leaves had died down and left them in the big garden’s shed to dry out (Monty Don’s advice?). I bagged them up and placed them in our veggie crisper two weeks ago. They look amazingly healthy…

So that’s our tiny garden in the city and all set up for our old age. I have a thing for rusty garden sculptures and stick ‘em here and there and there’s the rusty top of an old windmill on the gravel terrace along with a rusty old bedhead – all from the farm. They all add to the story of the garden.

Do travel across the most wonderful selection of global gardens via Mr P’s SOS.

And thank you for visiting ours. Cheers.