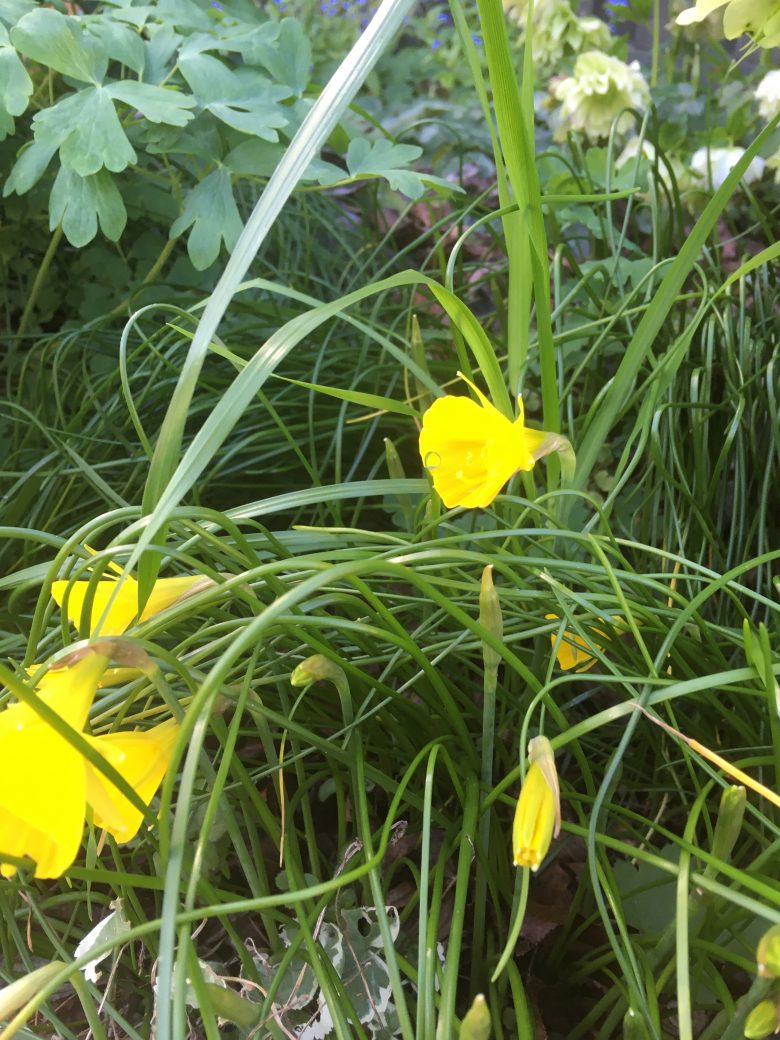 Having been away from our big garden on the coast for over 10 days, it has rocketed into spring in my absence. Sadly, the freesias are almost done and I’ve missed the best of the few tulips I had potted up. It’s not a groomed garden and things seem to appear from Heaven’s knows where, but that’s okay. The main thing is that it gives us such huge pleasure and an even bigger escape.

Poor OH has two major things happening – one is the massive mow every week for a couple of months (no ride-on as we have large drainage ditches through the property). After such a wet winter, it’s very thick grass. I can’t really call it lawn as it’s filled with weeds of all sorts, but we let that ride because the weeds stay green through our hottest months, giving the lawn a semblance of grandeur. 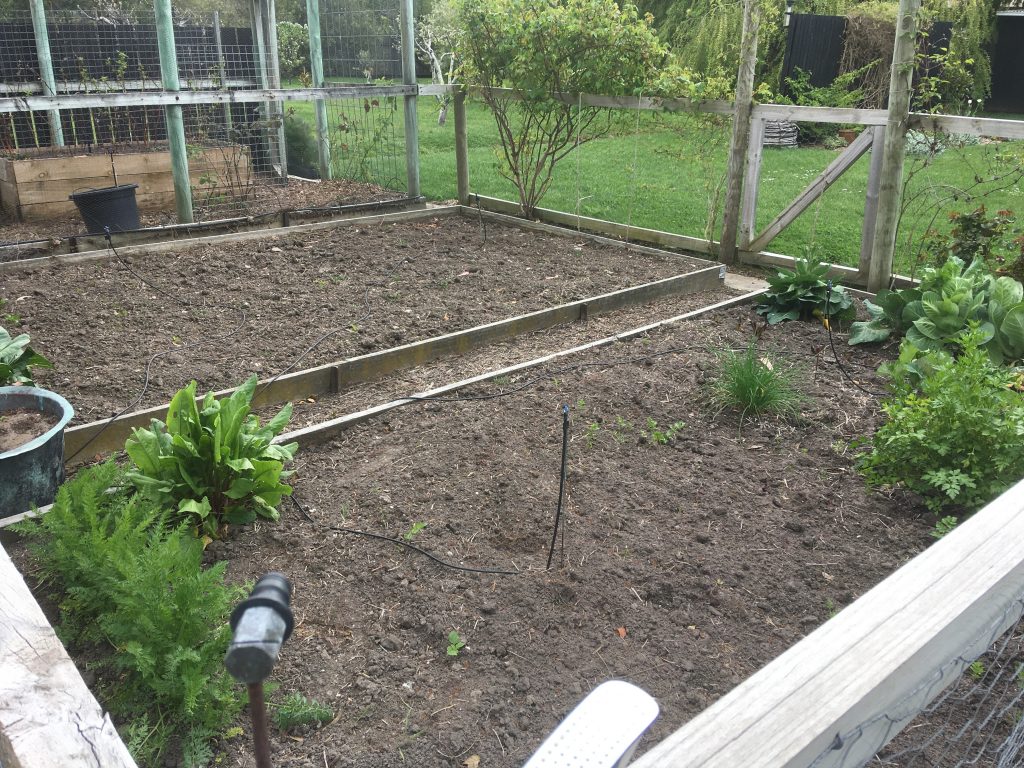 The other major thing for OH, and to a lesser extent me (although I will be carting and spreading soil), is that we’re contemplating turning the two veggie beds into three or four. This makes my first SOS pic. It’s a massive job and must be undertaken with speed as it’s almost time to start planting the veg. Post Script: since I wrote the post, we have decided to leave the infrastructure as is, but build two bridges to dissect the beds, which enables us to break the beds into four and it also allows access without compressing soil. It was my idea so I hope it works… 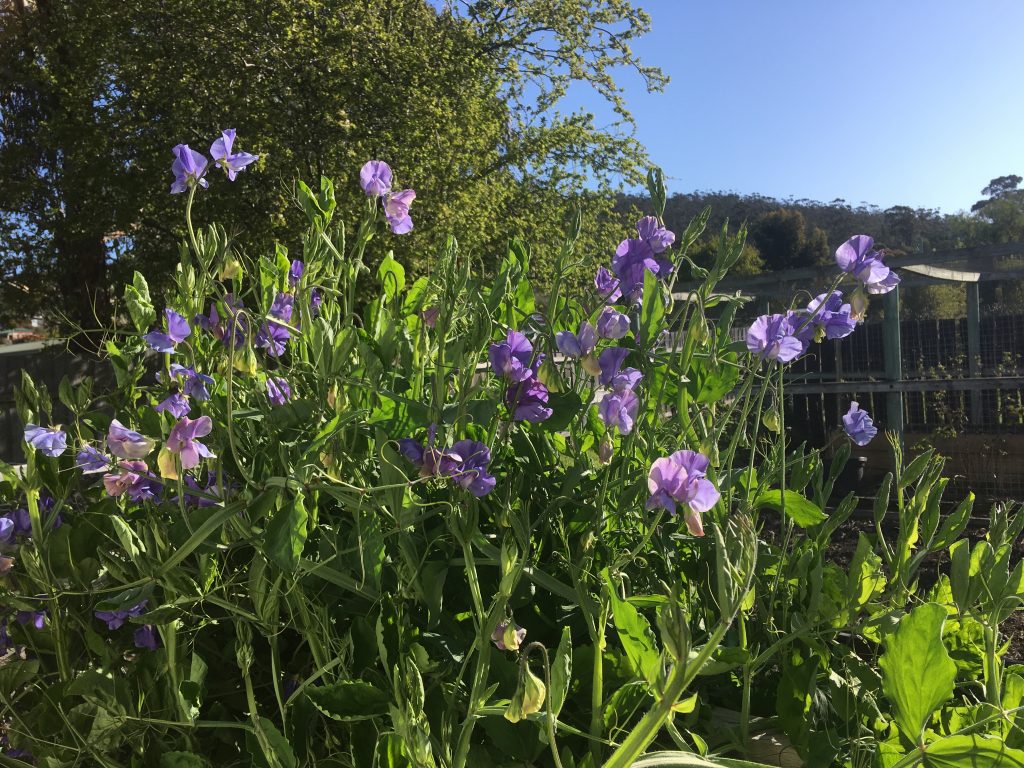 The second pic for today is the extraordinary sweetpea. It’s supposedly multi-coloured – self-sown from last year. I let them all grow instead of collecting seed and propagating. Perversely barely a blue flower was produced last year, and this year nothing BUT blues. Also my specialist whites have disappeared completely which I’m very sad about. Can anyone tell me why the blues have dominated? Even so, the fragrance is heaven and I picked a quick handful with some of the last freesias and the bedroom smells like a French perfumier’s. 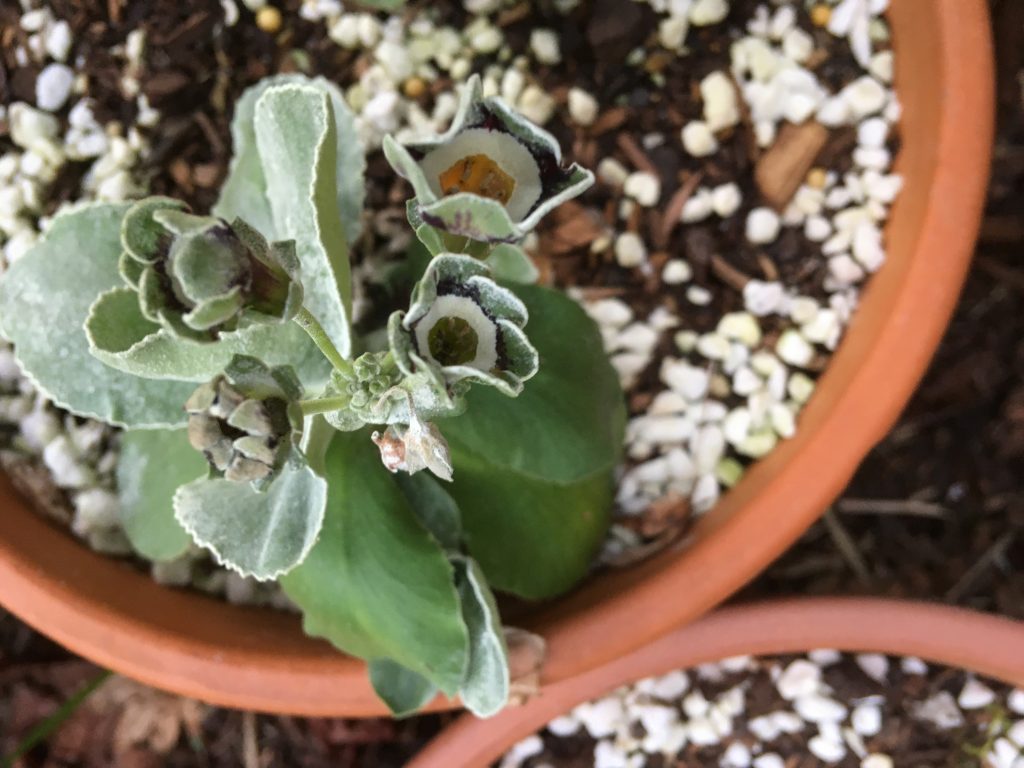 Auriculas are 3 and 4. One of the Jorviks sadly finished its flowers whilst I was away, although happily, as you can see, another of the plants has a flower stem. (good – it’s ghostly grey/green shade and reminds me of all things Viking). But… 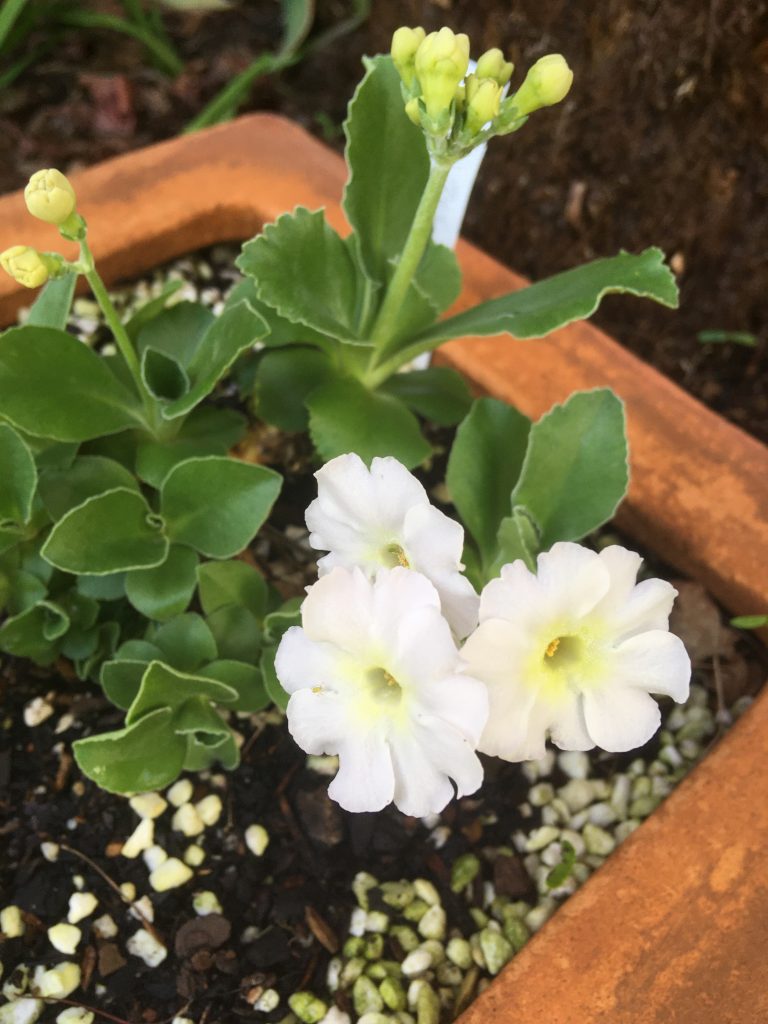 …surprise, little Ferntree Border is looking elegantly ivory and proof that dividing auriculas doesn’t have to go by the book. These were all divided in autumn, after I was told by a friend that they should be divided after flowering in early summer. The early division was a Lockdown thing and it’s worked brilliantly (on the advice of the breeder of the plants). The plants are really robust. 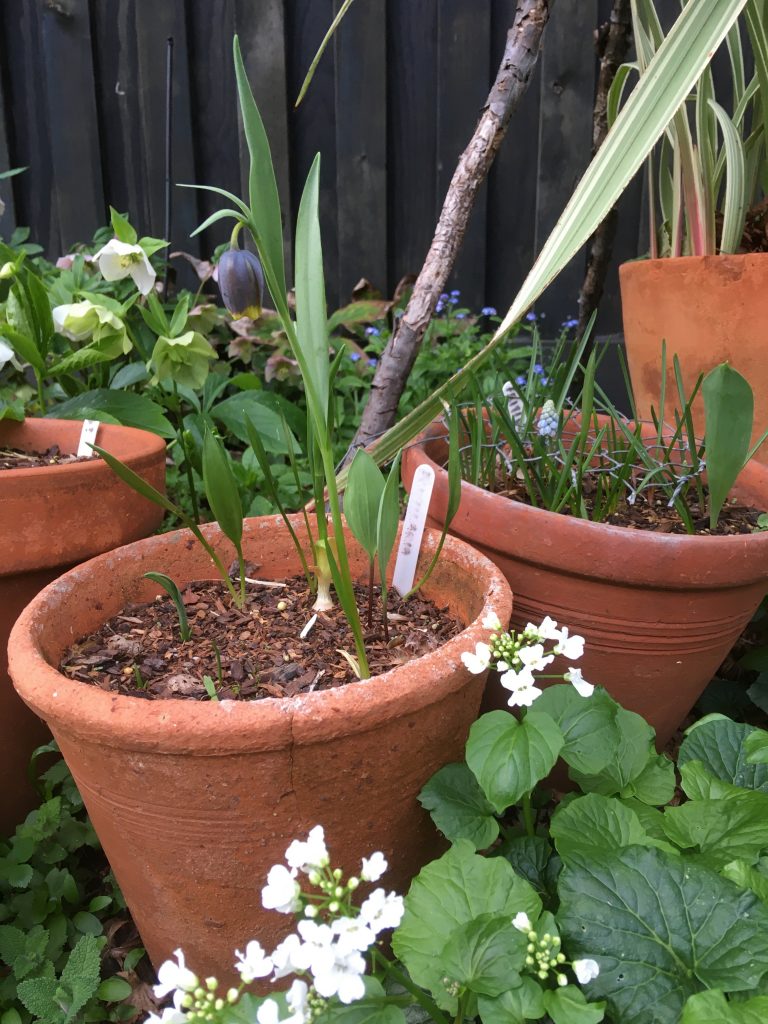 Number 5. I appear to have no Fritillaria Meleagris this year – they’ve disappeared somewhere, hoping they’ll reappear at some point. Instead, Uva-vulpis which appears to have propagated itself. Is that possible? 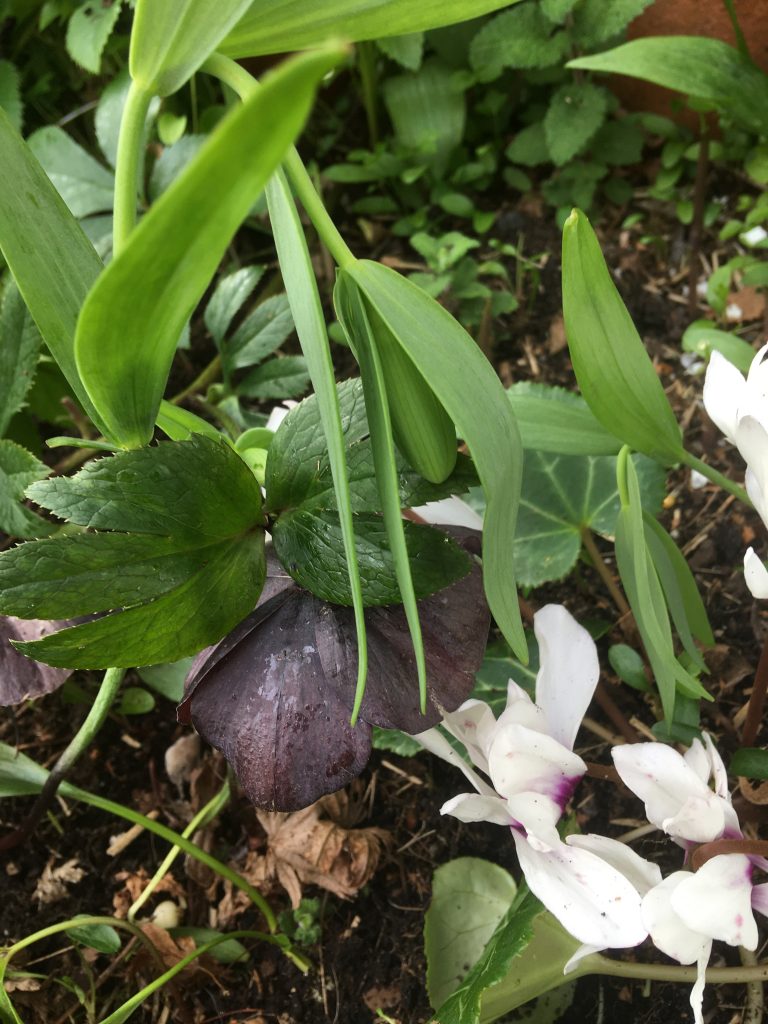 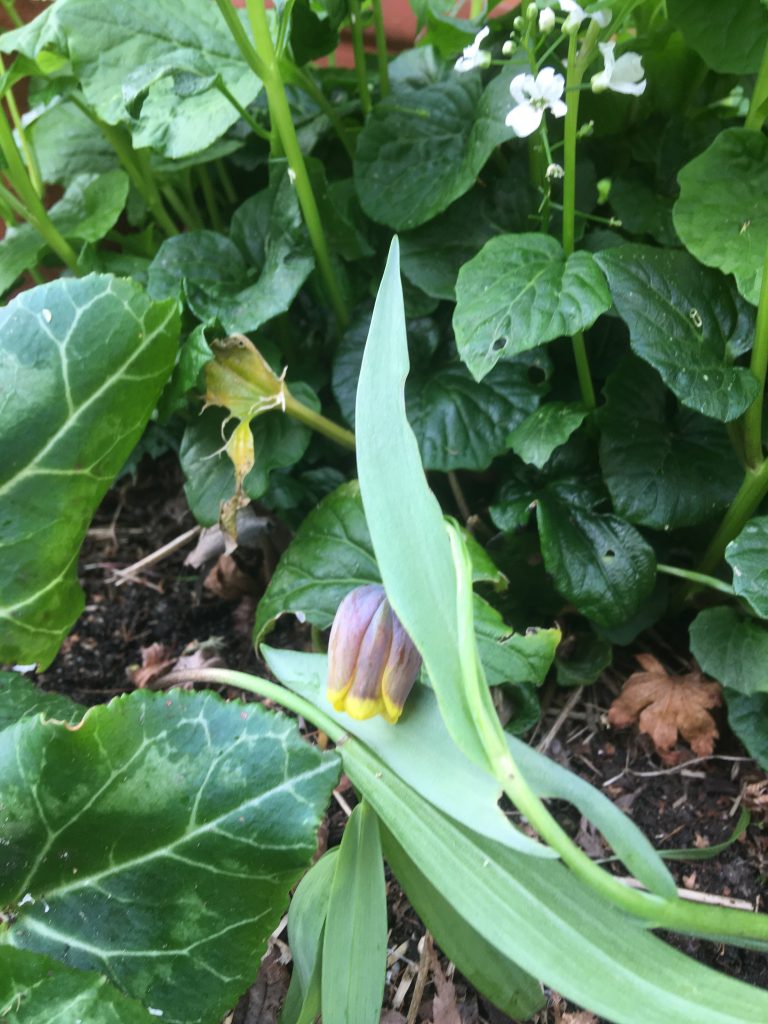 I have fritillary leaves popping up everywhere nearby, so assume its U-V. Or, they might be Meleagris. Who knows? 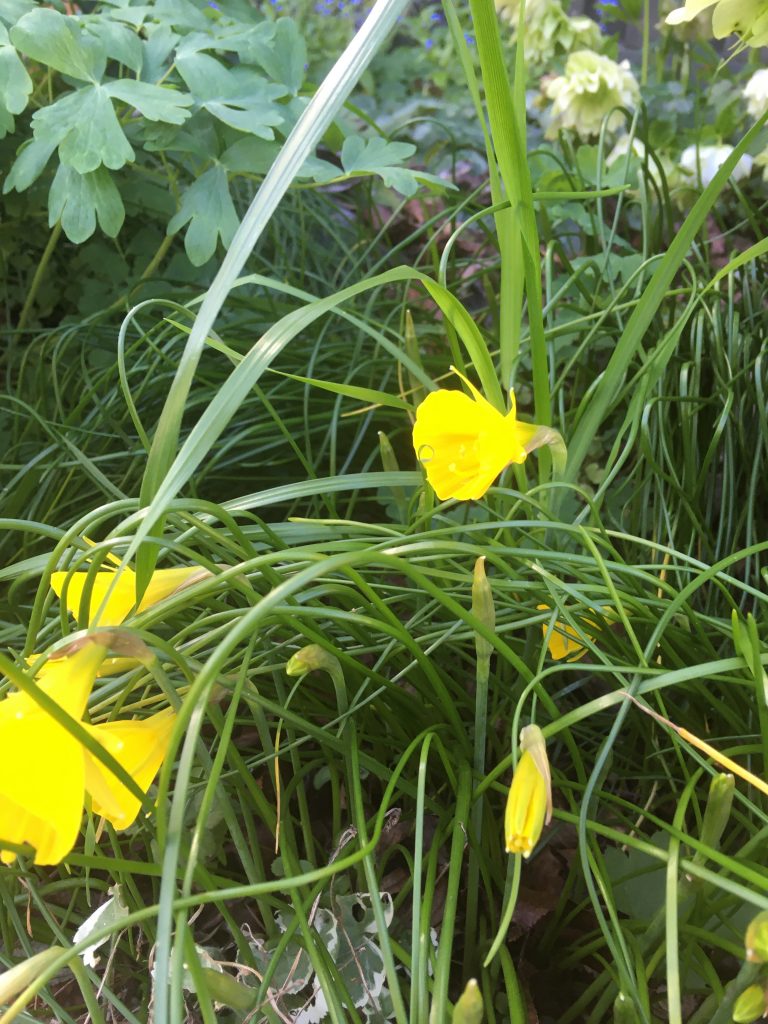 And finally the hoop petticoats which are endemic to this garden and flower every year and were planted by the dear lady and her husband who created the structure of the garden. We’re only the second owners in over 50 years and we’ve tried to retain her design whilst adding our own choices. The hoop-petticoats are so sweet and delicate and seem to naturalise well. They always remind me of Mrs. Roberts, who gave me her collection of Cornishware. I’m a Cornishware-aholic.

And that’s it from me. Pootle onto The Propagator to see what’s on offer globally and have a great weekend.

« No regrets…
Have read, have listened… »