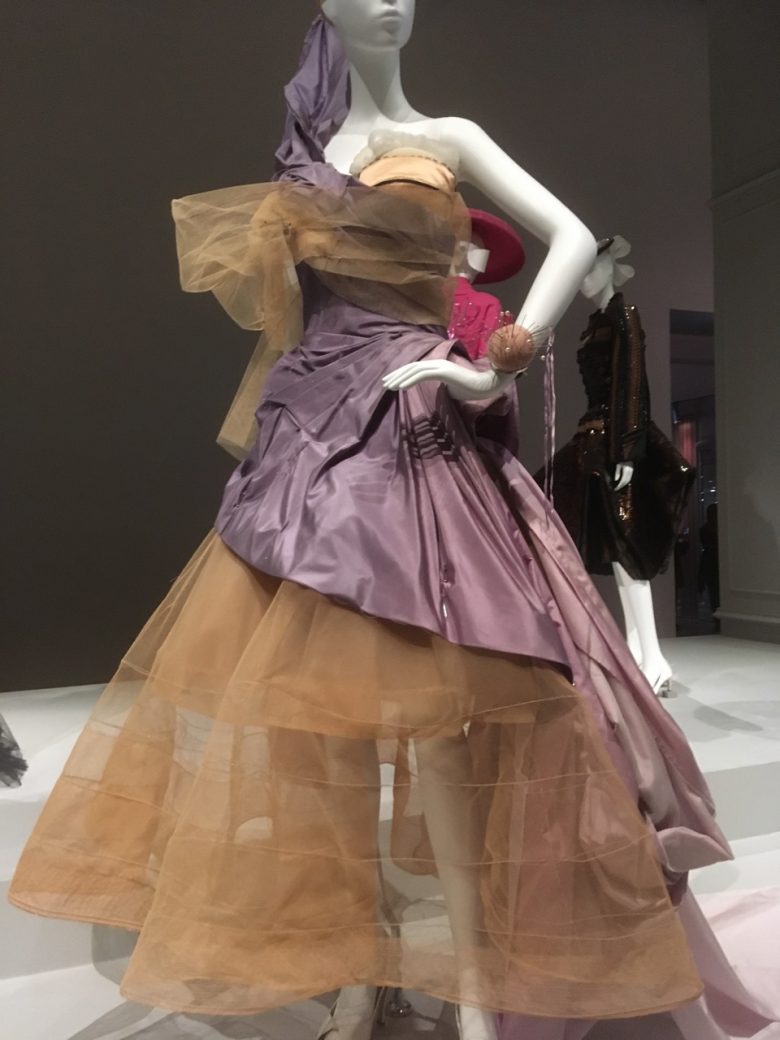 What prompts an historical fiction/fantasy writer to want to see the Dior Exhibition? 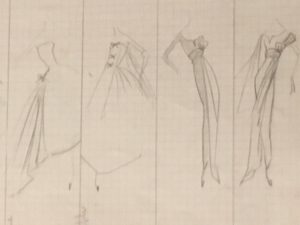 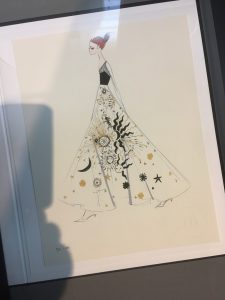 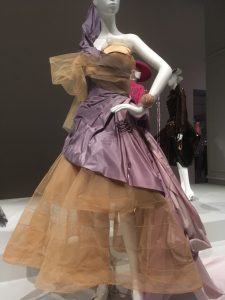 The novel I am writing at the moment has the twelfth century silk trade at its heart and my early fantasies dealt with the story on an embroidered silk gown. I am an embroiderer. My favourite medium is silk thread on silk fabric. 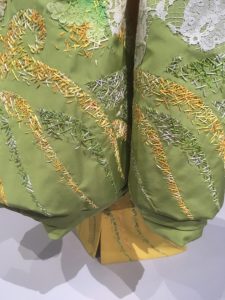 One of my earliest memories is hearing my mother walking down the hall as she came to kiss me goodnight. She and Dad were going to a Christmas party and in true 1950’s style, she wore a silk cocktail dress and silk stockings. The dress whispered as she moved and the sound made quite an impression on a six year old. 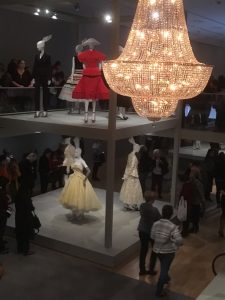 There were large screen showings of the fine handwork in the atelier’s rooms. It was a rather spectacular indication of how fashion has evolved from the 50’s to the 21st century. 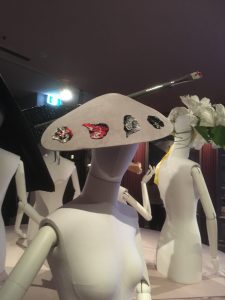 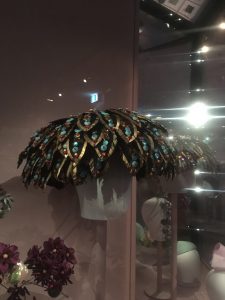 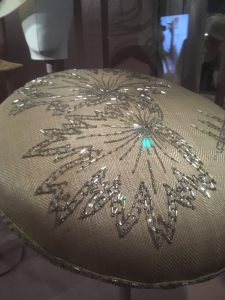 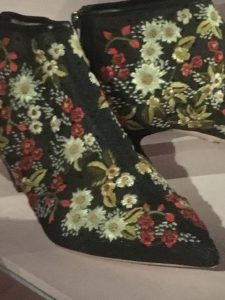 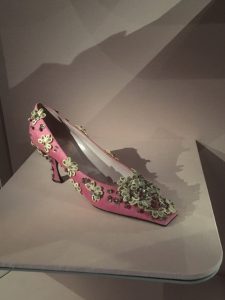 And not just confined to gowns and dresses, but shoes and hats.

The journey through the exhibition became a journey of the senses. Women and men oohing and aahing, the mellow sound of soft music, the brush or click of feet on carpet and polished concrete. 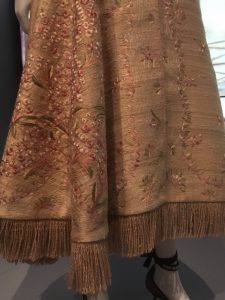 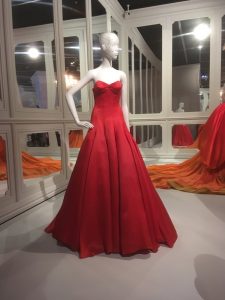 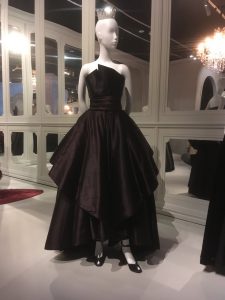 There was a need to imprint an image with photographs. A need to touch the fabrics but then the even more urgent need not to, because touching was obviously forbidden. And because one wasn’t allowed to touch, one relied on one’s memories of the feel of the fabrics… 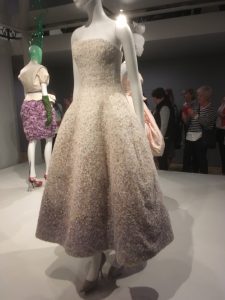 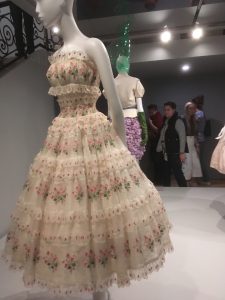 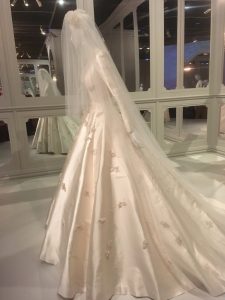 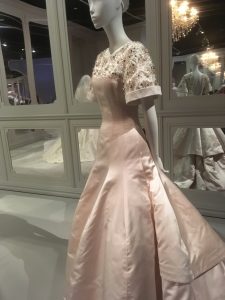 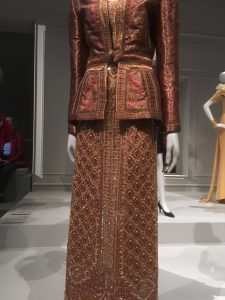 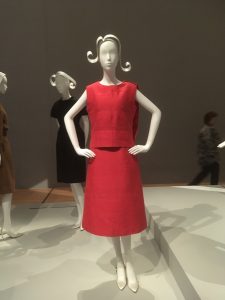 The cool-water feel of pure silk, and the sound it makes as it moves – a secret shushing, expensive sound. The running waterfall of satin. The smooth, almost ethereal ‘nothing’ feel of silk chiffon and silk gauze. The crispness and sharp edges of fine linen. The malleability and softness of wool. And believe it or not, the harsh, unforgiving and metallic texture of polymide wire netting. 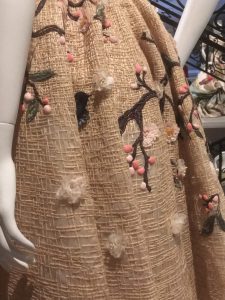 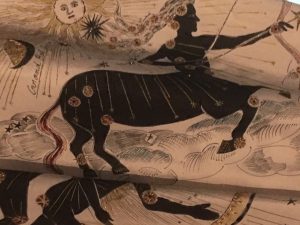 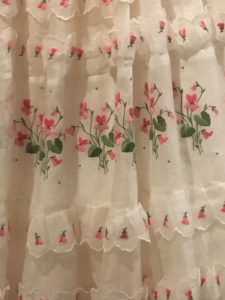 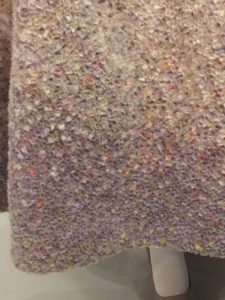 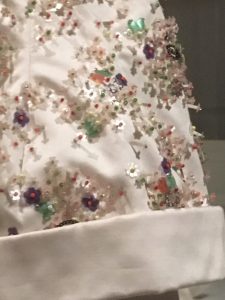 The beading and embroidery was jaw dropping. Goldwork, crystal beads, pearls, tiny pieces of organza ribbon to make flower petals, raffia – homages to centuries of women who have spent time with needle and thread embellishing cloth to make it even more beautiful. Through the eleven books in my list, there are embroiderers doing exactly what Dior’s embroiderers were doing. It was quite a thrill in an obscure kind of way. 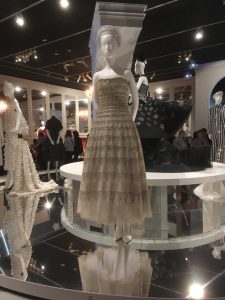 I concluded I am old-fashioned, classically so. Preferring past designs from Dior and Saint Laurent to that of Galliano. Impressed with the massive respect that Dior had for silk from the east. From the Silk Road. His designs and his manipulation of silks made my sensibilities sing.

There was a quote displayed on the walls: 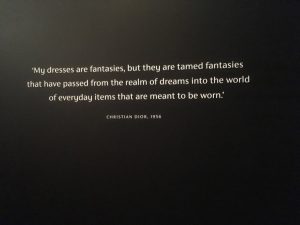 And in respect of my books and with gratitude to Dior for his words, I have re-written it slightly.

‘My stories are fantasies, but they are tamed fantasies that have passed from the realms of dreams into the world of everyday novels that are meant to be read.

(This is just a tiny sample of the dozens of images I took as I wandered. I came home and immediately picked up my embroidery and place a few more stitches, silk on silk. And then I wrote about my protagonist’s daughter who was embroidering an Orthodox ‘epitrachelion’. Thus Dior was in fact just a little bit of an inspiration.)