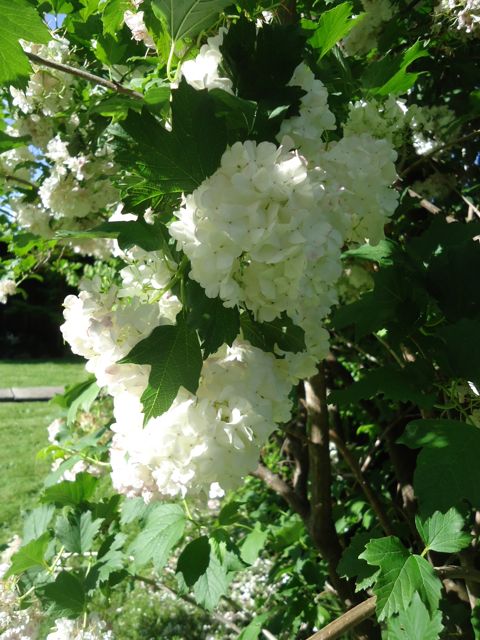 Vita Sackville West’s White Garden at Sissinghurst  is iconic and many gardeners, myself included, have tried to create their own little piece of that superb garden.

My own lasts about 2-4 weeks in spring, a much awaited sea of white before the summer dry begins. VSW wrote for The Guardian’s gardening column and in 1950, this is what she said about the idea of growing a mono-colour garden:

“For my own part, I am trying to make a grey, green, and white garden. This is an experiment which I ardently hope may be successful, though I doubt it. One’s best ideas seldom play up in practice to one’s expectations, especially in gardening, where everything looks so well on paper and in the catalogues, but fails so lamentably in fulfilment after you have tucked your plans into the soil. Still, one hopes.

My grey, green and white garden will have the advantage of a high yew hedge behind it, a wall along one side, a strip of box edging along another side, and a path of old brick along the forth side. It is, in fact, nothing more than a fairly large bed, which has now been divided into halves by a short path of grey flagstones terminating in a rough wooden seat. When you sit on the seat, you will be turning your backs to the yew hedge, and from there I hope you will survey a low sea of grey clumps of foliage, pierced here and there with tall white flowers.

I visualize the white trumpets of dozens of Regale lilies, grown three years ago from seed, coming up through the grey of southernwood and artemisia and cotton-lavender, with grey-and-white edging plants such as Dianthus Mrs. Sinkins and the silvery mats of Stachys Lanata, more familiar and so much nicer under its English names of Rabbits’ Ears or Saviour’s Flannel. There will be white pansies, and white peonies, and white irises with their grey leaves… at least, I hope there will be all these things. I don’t want to boast in advance about my grey, green and white garden. It may be a terrible failure. I wanted only to suggest that such experiments are worth trying, and that you can adapt them to your own taste and your own opportunities.

All the same, I cannot help hoping that the great ghostly barn-owl will sweep silently across a pale garden, next summer, in the twilight – the pale garden that I am now planting, under the first flakes of snow.”

In my garden, it’s no barn-owl that sweeps silently. It’s a pair of turtle doves who coo quietly, almost shyly, welcoming that fleeting show of ivory…

PS: The one thing about MY garden compared to Sissinghurst? Bet they don’t have to fence off to stop wallaby decimation!

« Castles, Customs and Kings…
Why this legend? »