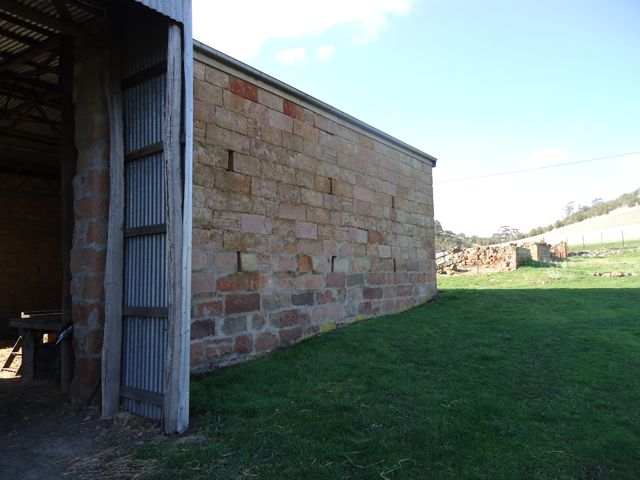 After writing the post on the Templar Commanderie in France with its beautiful old stone and woodwork, I was in the mood for ruins of all kinds.

It seems we have some of our own.

We bought our sheep property about twelve years ago and one of the things that attracted us to the place, apart from it’s excellent farm soil, its wonderful hills and views, house, shearing shed and machinery shed, dams, proximity to the coast and the city etc etc etc – was the apparent history right before our very eyes.

Our farm here in Australia dates from colonial settlement of the district in the mid-1800’s. Sadly, during horrendous bushfires in 1967, the stone homestead and barn were burned to the ground. The barn was re-built in exactly the way it had stood but with more modern infrastructure.

The bones of a stables and smithy (below) are still evident and we keep them weeded and trimmed and have planted a grove of native trees close by. The old laundry, built in convict-made bricks and attached to the side of the burned house. Until 3 years ago it was shrouded in ivy that was throttling it.

We pulled all the ivy away, knowing that it would then only be a matter of time before wind and weather knocked the whole thing over. But the bricks will be re-used when that happens, for something beautiful round the home precinct. More stables, one ruin of which we turned into a sheltered dog enclosure for working dogs.

The back wall now forms a magnificent wall within the house garden but like the old laundry, the stone is beginning to fall and we know we shall have to rebuild it in the next couple of years. It will be a job worthwhile as it’s a fabulous backdrop to the garden on the other side.

In the Great Depression, trappers travelled from property to property to cull rabbits, possums and wallabies. A shack was invariably built in which they would stay and this one will be moved back a few metres and rebuilt next year when the dam behind it is enlarged ready for irrigation.

Very basic. One room with a platform high up near the rafters to sleep on.

A fireplace – again in a bad way. The massive lintel from over the fireplace.

A table made of old fence posts.

I know we can never claim the sheer excitement of having twelfth century ruins on the farm, but given Australia’s recent history, (as opposed to the millennia long history of our original inhabitants), we figure we’re quite fortunate to have our own form of colonial record.