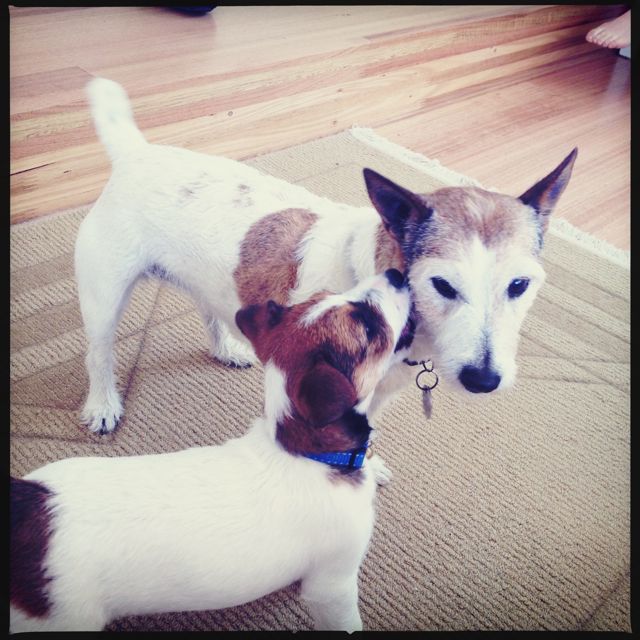 I had enjoyed such a good afternoon.

Wrote 2600 words of the WIP – Gisborne: Book of Knights. So excited about that I made the most yummo choccie cheesecake slice.

Then it all went to Hell in a Handbasket.

I fed the dogs. On opposite sides of the patio as always. Pup (He) took longer to eat his than Old Dog (She). She edged over to him and he growled, she growled, hackles went up and it was a full-on ‘to the death’ brawl. They are having more of these scuffles lately. Old Dog (12.5 years) is getting grumpy and sour and growls at me too, when I pick her up. She has always been a feisty little thing.  With our previous Old Dog, she called the shots and he backed off. But Pup, now a year and a half old and bigger than her, is beginning to stand his ground.

He latched onto her neck and I couldn’t separate them with a towel and my adult son dove in as he could see this was a nasty one. In the process, his finger was bitten. He dragged it back and thought he’d lost a fingertip (he’s a carpenter, thus a carpenter’s nightmare). I raced him to the doctor’s and on investigation, it seems the dog (Pup) had ripped back the nail from the nailbed and punctured the finger from the underside. No tip loss but unbelievably painful.

Neither dog was injured at all, apart from pride.

I intend feeding each in separate quarters and not allowing them to mix until bowls are removed. Old Dog is walked for 45 mins a day with Pup, but Pup gets an extra one in the evenings of up to 45 mins. They are both played with, acknowledged, and Pup is on a summer break from Obedience School but still being trained by me every day. However today during the fight, he was deaf and blind to any command.

If you own Jack Russells, or even a pair of dogs, tell me how to prevent this escalating. I don’t like to think of what might happen otherwise.