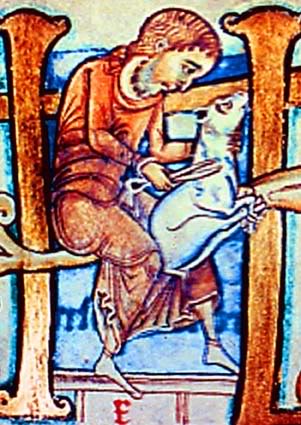 Gisborne… the first instalment for FanstRAvaganza

Please enjoy the following chapters as part of the FanstRAvaganza event. At the end of each chapter will be a list of blogs that you can visit for the occasion.

For the rest of the Gisborne story from the very beginning, go to the Page listed as Gisborne at the top of the blog and click and off you go!!!

*At the end of the previous chapter, Ysabel had found Ghislaine of Gisborne’s grave.*

‘I know your son, my lady. I have been his charge these last weeks. He has been diligent and chivalrous… you would be…’ I stopped as the tears rolled unchecked. Maybe it was that I spoke to his mother or even just to a mother. Maybe it was that all those hurts immured deep inside were in need of acknowledgement and who better to understand and acknowledge hurt than a mother. I wondered why I didn’t pray in the chapel? But no, I want to talk here, person to person as it were, with someone who knows of whom I speak.

As I knelt by the headstone, my fingers went from tracing the chiseled name to rubbing back and forth over the mound that was her resting place. A path had been scythed, winding around and through the stones, but on the mounds themselves the grass had been shorn like a sheep’s fleece.

Underneath my palm, the nap was smooth and cool, a little damp from the mizzle. I had a vision of Sister Thea working diligently with a pair of shears at each mound.

My conversation continued, ‘I know your nephew as well, my lady; the one you might call Robert or even Rob; the one I call Vasey but whom I would prefer not to acknowledge at all. He has come far, I tell you – but he is suspect. Whilst your son is a man of whom it is possible to be proud, I fear your nephew, who holds you Lady Ghislaine, in the highest esteem, is not.’

I looked around and noticed a branch hanging low from a hawthorn, its berries bright red, its leaves a coppery shade. There were some chamomile daisies close by and I picked some sprigs of the white and joined them with the ruby of the hawthorn, tying them around with a twine of ivy that clung to the Priory wall. Laying the offering against the headstone, I continued on my knees like a penitent.

‘Your son has all the intellectual breadth of a scholar Madame, and at any time I feel sure he could make his mark honestly, but he struggles with bitterness. Born of the plight that struck you and he and left you homeless; that took his heritage and your life.’

In my mind I could see Guy curling around me in the shelter of the ruined woodsman’s hut as I trembled after Wilf’s and Harry’s deaths. I remembered his breathing and how I sought to slow mine to match his and how his thumbs traced hypnotic and calming circles over my knuckles. My eyes filled but did not spill.

‘You see, my lady,’ I said. ‘I worry. He hitches his star to Vasey’s. He chooses deception and cunning instead of…’ I stopped and sighed. ‘It’s what he chooses. It is the way of it.’ I heard the ringing of the bell for None. Looking up, I could see Sister Thea standing at the hedge, an arm raised to shield her eyes from the sun which rested lower in the afternoon sky. ‘Watch over him, my Lady of Gisborne. Guide him and help him make wise choices. I ask not for me…’

Sister Thea moved toward me and I scrabbled the tears from my cheeks, pushing myself off my knees, the marks of my body now a moulded intaglio on the grass.

I turned away. A feeling of separation pulled at me. I didn’t want to leave, as if in that one moment I had a last found someone who could sift through my confusion. I could hear the rustles as Sister Thea’s robe caught against clinging plants, her approach filled with haste and I recognized perturbation in her manner.

She grasped my sleeve and pulled me behind her at a jogtrot through the garden to the cloister, clipping along the colonnade until we reach the chapel door, sidling into the space beyond as the bell’s echoes reduced themselves to the common overwhelming silence that was St. Eadgyth’s.

Flickering candles along the walls lit the gloom and apart from one narrow arched window in the Norman style, there was little either to commend the architecture or to allow light to enter. But the window was unstained, unlike so many of its noble counterparts. The plain glass was set high in the wall above the altar and allowed one to observe the moving and changing panoply of the heavens and on this day a small beam of sunshine slipped through the fenestration and fell in a gleaming path to the simple altar where a brass cross stood flanked with two large candles.

Unlike my soap, which had been rendered with perfumed oils and filled the air with its aroma, the candles were mere tallow and the smell wound through the other fragrances within the chapel – of unwashed bodies and woolen robes, of feminine odour, of bad breath close by. This was a simple priory devoted to God and the simple life. In larger houses and abbeys I knew of the escapades of the Sisters, of the baths, the cosmetics, the showing of hair beneath the wimple, of self-indulgence on an obvious scale. St. Eadgyth’s was different and whilst the odour was not pleasant, it was possible to understand why it existed at all.

Profound quiet thundered around my ears. I could hear my heart beating, could hear the Sisters breathing and for a reason I couldn’t identify, I felt uneasy. Beside me Thea sat calmly, upright on the bench, her eyes fixed on the narrow window. The Prioress knelt directly in front of the altar on a cushion and she too stared at the window. I looked around and realized all the Sisters looked upward and I was struck by the beauty of the image, as if they expected God’s or the Virgin’s love to come streaming down on the strip of sunlight. I had not such faith and wished the prayer was over, whatever prayer they made. I squirmed and took deep breaths, feeling hot crammed between Sister Thea and another whose feet were a less than comforting sight when I looked down.

Sister Thea must have sensed my disquiet because she nudged me gently and nodded to her lap. With one hand she passed me an end of her girdle which was knotted at intervals. As I watched her in prayer, she closed her eyes and her fingers slid over the other end of the girdle and at each knot she would pause and her lips would move. It seemed to help her in her meditations and I looked at the grubby cream end she had passed me and ran my fingers over the whipped cord from one knot to the next.

Unaccountably I began to think on a simple prayer. ‘Protect Gelis, Lord,’ One knot. ‘Protect Marais.’ Another knot. ‘Protect all those in Montrachet.’ Another knot. ‘Care for Wilf’s and Harry’s souls and those of their families.’ Another knot. By this time I had almost reached Thea’s waist as she sat blithely pursuing her own devotions. So I slid my hands to the bottom of the cord again. ‘Bless Lady Alaïs, my mother.’ A knot. ‘Bless the Lady Ghislaine.’ Another knot. I took a breath and stared at the window and as I closed my eyes could only see a pair of storm blue eyes gazing back. I bit my lips and as my fingers slid to the last knot I prayed in the silent way of St. Eadgyth’s – ‘Father, bless Guy of Gisborne and protect him. Please.’

A movement in front drew my attention and I opened my eyes to see the Prioress stand,

cross herself and turn to walk to the door. The nuns followed two by two, leaving Thea and I to bring up the rear as she tightened her girdle. I smiled my thanks and she turned away and went toward the frater whilst I went to my cell. The sky had a tinge of autumn dusk about it and I realized how tired I was. Knowing the expectation was that I should attend each devotional – Vespers, Compline and in this old-fashioned little house, Vigils, Lauds and Prime – before Guy collected me, I resolved to sleep as best I could.

I slept, deeply, and at each of the bells I barely reacted to the sound so that Thea’s hand would shake me. I would roll off the cot, totter after her in the shadows and enter that strange-smelling chapel. At Compline the window showed nothing but a strip of dark against the deep shade of the stone walls and I closed my eyes to doze rather than pray. At Vigils and despite my best intentions, I found myself slumped on Thea’s shoulder but she was kind and betrayed no disappointment in my worldly manners.

She passed me her girdle and I followed my tentative prayer circuit but it led to musing on Guy’s face and I gave up and just counted my chilled toes… again and again. This was the test, I knew. And I had failed miserably. There was not a shred of the devout soul in my body and I knew how false I would be to become a nun and that I would do a religious house no favours by my presence.

At the end of each devotion I would crash back down onto the cot which squeaked and groaned, and freezing cold I would swaddle myself tightly as if with a death shroud. Each time, despite the cold and the discomfort, I would fall asleep thinking on Guy and on my own future.