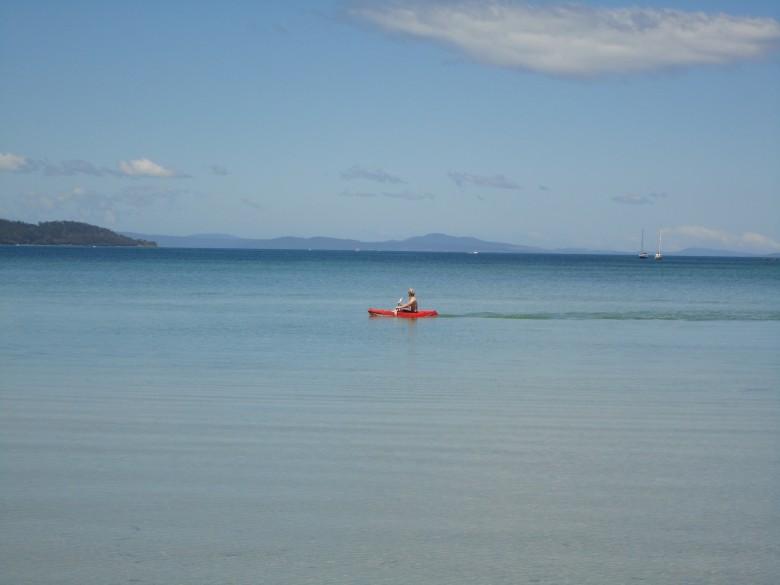 Communication; it takes two. Stay with me and I’ll explain.

Today we took the boat once again to Maria (pronounced Mar-eye-ah) Island.  A glorious day, and where we chose to moor, so calm that one could barely tell where water ended and land began. The family left the boat and decided to walk along the coastal track to the lagoon and bay where we wished to swim.  I had brought my kayak with me and decided that I would paddle round to the bay. Maria Island has snakes here and there and I figured I’d rather take my chances with the water than snakes as anyone who has read this blog knows I have a snake-phobia.

But today was beautiful and surely the water would offer a wonderful experience. The kayak is our spare and quite new and has a silky bottom so that it glides through the water with barely a ripple. The only sound was the dip and lift of my paddle, the light catching on the diamond drops of water as the paddle arced in the air. The sun was warm, so much so that I wore one of my father’s old business shirts to prevent sunburn. The water was so perfect that I could see shoals of silver salmon flicking this way then that . . . the only sign a metallic flash of light as they turned that way then this. Patches of weed coloured the bright white sand sporadically and occasionally I would pass over a rock marking the outer edge of the shore.

The rhythm of my paddling lulled me into such a state that I barely realised what was beneath me until a black shape shot out with the speed of light, away from the shadow of my kayak. Attention drawn, I realised I had just passed over an eagle ray. Another and another. Three together, overlapping each other.  There! A huge one, one and half times the width of my kayak. More.

Then I saw a shape ahead. Half-dusted in sand. It didn’t move. I let my paddle drag, it seemed as if it were a shadow. I floated directly above it and still it stayed motionless and so I decided it was just a sunken piece of driftwood from the recent floods. I pushed my paddle down into the water to lever the wood up and it fluttered its wings, shook off the sand and rose almost to the surface. Thus began Part One of my communication with a fish the width of my kayak.

I uttered a cry and the rest of the family, pacing along the track, came down to the shore and my son yelled, ‘It’s an eagle ray. Be careful, Mum. He’s not happy.’ At the same time said son dragged madly at his dry-bag, trying to get at his camera. Thus began Part Two of my communication with said fish.

I didn’t back away for two reasons; one being that I seemed to be floating over an absolute plague of eagle rays and secondly because this one had made me curious. The closer I paddled to shore, the closer to shore he preceeded me, his tail flicking from side to side in the water. Finally he and I could go no further, and on reflection, I should have taken note of the message he was trying to communicate which was ‘Leave me alone, I want peace.’

His last method of communication was to lift his tail over his back like a scorpion. The barb was perhaps four inches long, the whipping tail about eighteen inches long. This fellow had about twenty two inches of pure aggression arched purposefully into the air. And he was as black as night.

He turned toward me and I confess to being frightened. I back-paddled, giving him enough room to fly underneath my kayak and away. There was no doubt he’d been trying to tell me to back off right from the start. If I’d been concentrating on his needs more than my own curiosity, maybe I wouldn’t have been scared. But then again, maybe I would never have seen such a superb sight and such brilliant armoury.

It all happened in seconds before my son could drag his camera from his drybag, but even he, a boatsman and fisherman for ages, said he’d never seen a ray lift his tail like that before. It did remind me for an instant what must have happened to Steve Irwin and to be frank I was happy to back off, pleased to paddle away and begin a whole other communication with nature elsewhere.