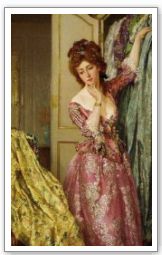 Sarina alighted from the gondola, stepping onto the rather narrow walkway that ran in front of Via della Principessa, one of the most exclusive shopping streets in Veniche. Today’s errand was to select trim for the shoes she was having made for the ball.

Her gown and mask had been commissioned several weeks ago and she was quite pleased with the progress thus far. This was not the ensemble she had planned to wear. Her original concept had been based on a gown owned by Marie Antonetta — a regal robe of cream-colored brocade with opulent golden trim and an exaggeratedly wide skirt.

In fact, she had purchased many, many yards of extremely costly Raji silk for just this purpose. But realizing that the dress would hamper her movement – and feeling rather bored by its aggressive loveliness, she had decided to search for something more intriguing. And really, the knowledge that Hugh would be present had nothing to with it. Absolutely nothing…

Through the kind offices of Niccolo de Fleury she had been given access to the Invitation Only area of his Millefiore Company. De Fleury had escorted her to the sequestered chamber himself and had been quite charming. 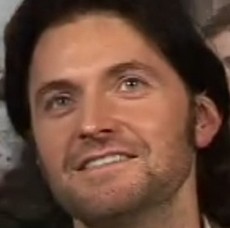 Lost in her musings, Sarina almost didn’t hear the shy voice greeting her. It was Annabelle Dechanel, accompanied by Parthenope’s niece Vittoria. The two were well nigh inseparable these days.

“Well, you two girls look as though you’re having a lovely afternoon,” she smiled at them.

“Oh, Contessa!” Vittoria bubbled with excitement. “Is it not exciting about the ball? We have been planning our costumes and it is such fun!”

“Yes,” Bella said, a bit shyly, “although I have yet to find suitable material for the dress I have in mind and I am worried that there won’t be enough time to make it up.”

“Come, let us see what can be done about that.” Sarina responded. “Shall we adjourn to a café to discuss the possibilities? I would give me pleasure to have you as my guests.”

The girls assented eagerly, and Sarina shepherded them to her favorite patisserie. As they chatted, a part of her mind was occupied with the opportunity that had presented itself. If she could but manage to get Annabelle to reveal the amulet pendant to her, she might be able to find a way to… oh, she didn’t know quite what she would do, but the situation was complicated and she longed to demonstrate to Hugh that she was capable of contributing to a solution to the problem that faced them. For a moment, she was distracted by rosy dreams of Hugh being overwhelmed by her cunning and daring. How his tourmaline eyes would light with admiration and then darken with passion as he realized… 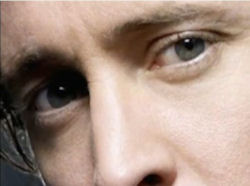 “Contessa?” A pair of puzzled faces gazed at her from across the table.

“Oh, my dears, I am sorry. My mind wandered for a moment. Annabelle,” she said, as though inspiration had just hit, “I wonder if you would be interested in taking a look at some fabric I have put by. I placed a special order for it but find that it does not become me as I’d hoped. With your rosy coloring and auburn hair, however, I believe it would be just the thing. You do not need to use it if it does not suit your purposes, of course. I would be so happy to bring it to you tomorrow, if you will allow me to call on you. I have business on the outskirts of town and I believe your home lies on my way.”

Annabelle blushed with pleasure and said she would be honored to receive the Contessa at a time that would be convenient to her.