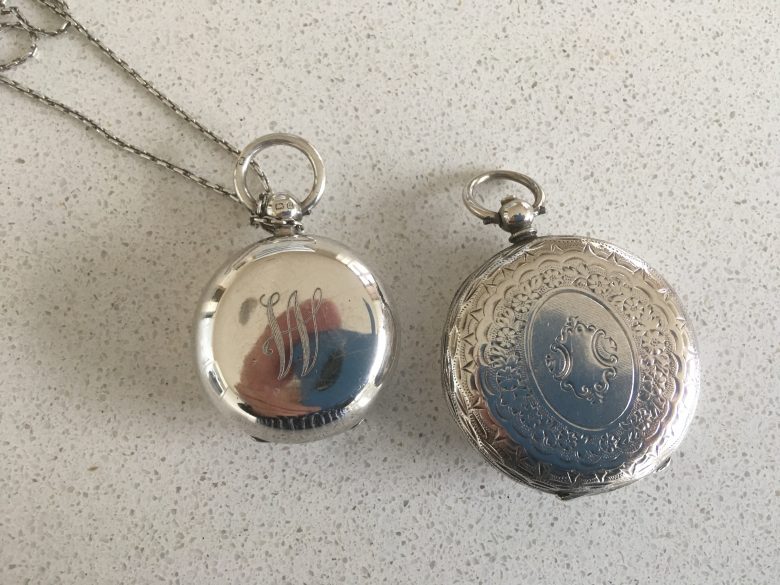 I’ve just had the loveliest trip down memory lane.

Of all things, cleaning the silver.

When we down-sized we got rid of what we loosely called ‘the family silver’. There wasn’t much really, and we kept what had real meaning for us.

The house in which we live is mostly scrubbed wood and easy living. So we ditched the antiques for something that created the mood we wanted.

Today I needed to clean the little silver we decided to keep.

Each piece tells a story. 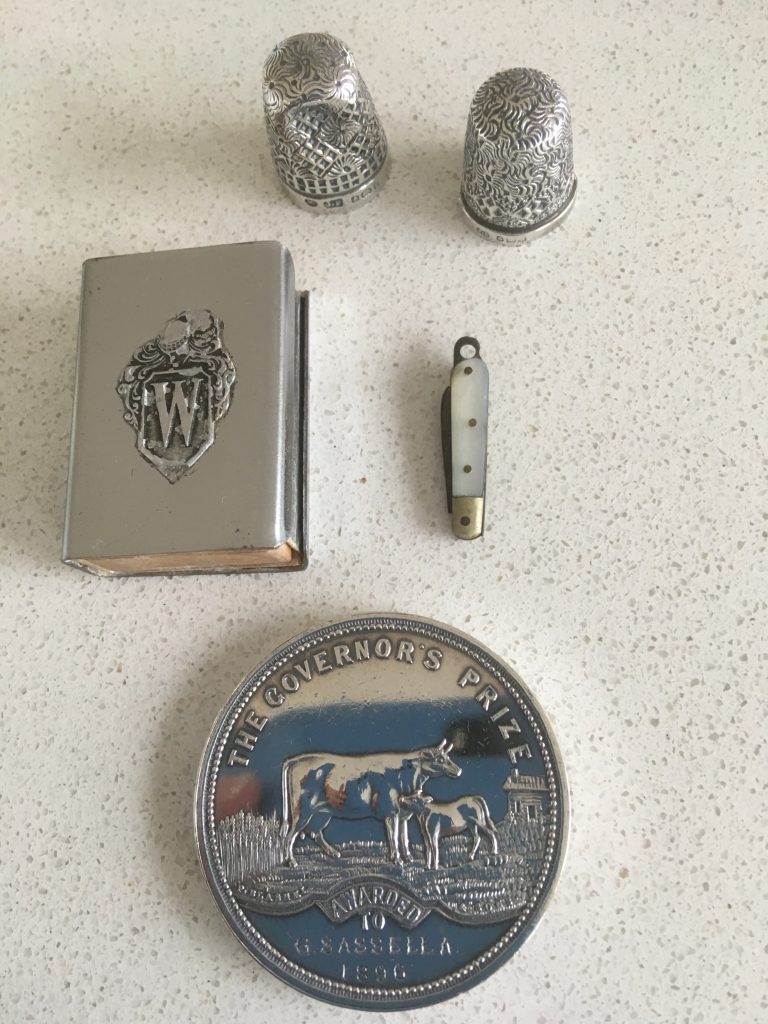 A Governor’s Prize medallion from the 1890’s from the Italian side of my husband’s family (his great grandfather – Black Sass). A farmer no less – farming coming from both sides in my husband’s family. And his name, Black Sass, is such an epithet! I imagine this tall, bulky Italian with fierce black hair blowing in a dry Victorian (Australian) summer wind as he moves cattle across paddocks.

The thimbles have dents (why? How did they get there) and came from a paternal great aunt who was an inveterate stitcher. The matchbox from my paternal grandfather, who smoked a stained and worn pipe. 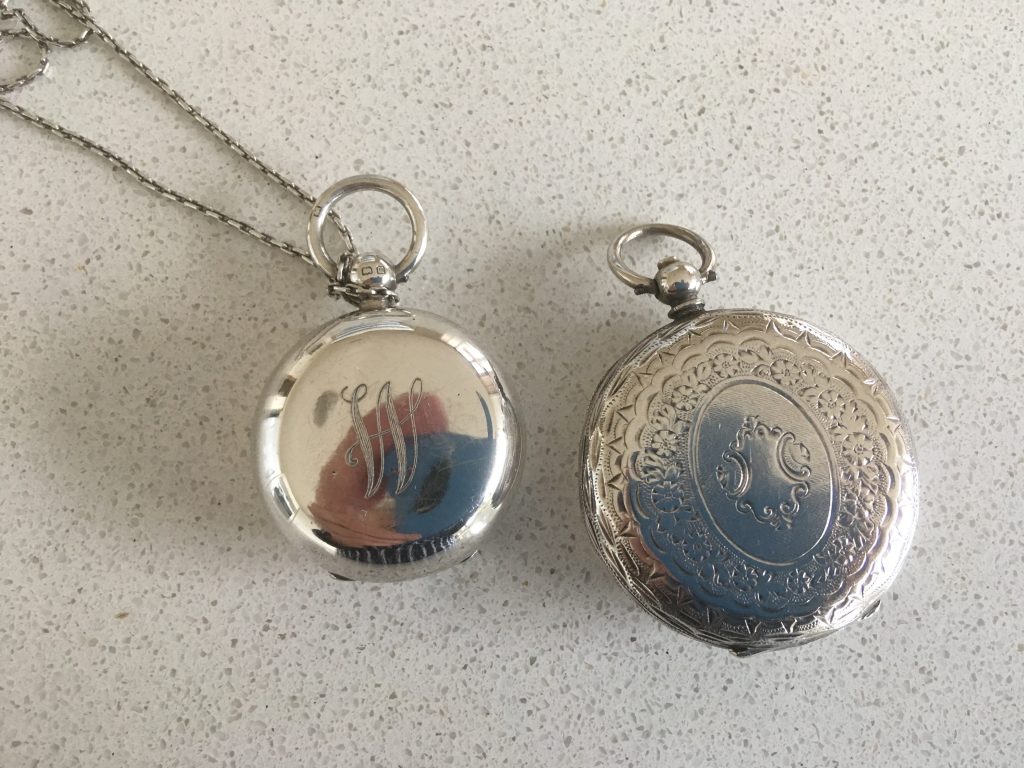 A sovereign case and pocket watch, both from my great great Uncle John Wallace from the 1880’s (there were a number of Johns). Originally the Wallaces moved from Scotland to Ireland in the mid-1700’s and inevitably, this particular John moved to Melbourne from Ireland in order to seek his fortune. He continued the Wallace family’s involvement with books. He was a bookbinder. Later his son, Richard, my grandfather, would also become a bookbinder, but in Tasmania. ‘Wallace’ was my maiden-name and my father was inordinately proud of his Scots and Irish heritage.

The pocket watch no longer works and the sovereign case is a history lesson in progress. I say that because I wore it often with our own fledglings and they used it to teethe. So too does our grandson when I wear it. There are teethmarks to prove it and I love those marks. Dad gave me the sovereign case to wear on a long silver chain when I began to work in the media. The pocket watch I inherited when Mum died. Many memories… 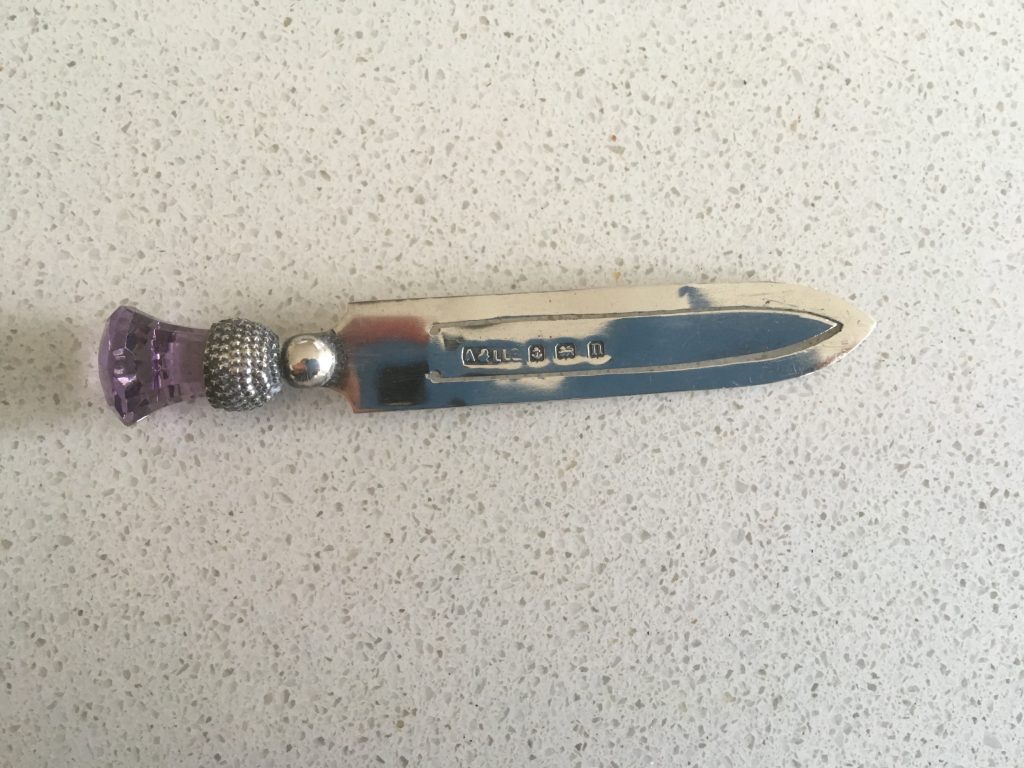 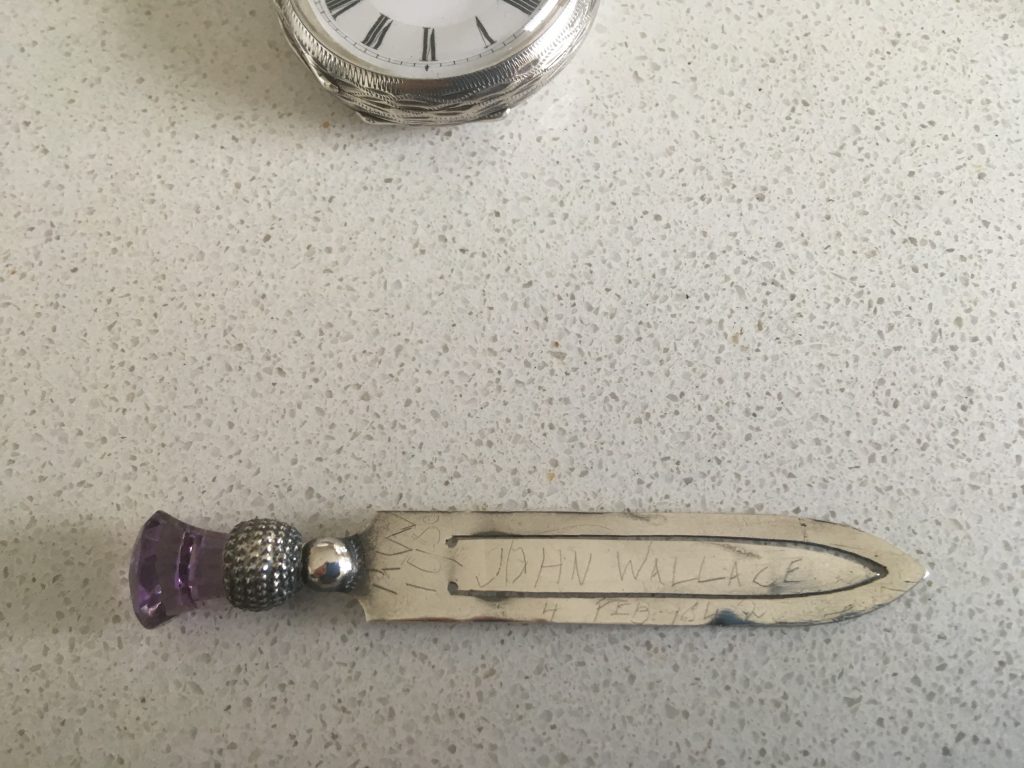 This letter opener/bookmark came originally from Scotland and belonged to another John Wallace who at that point had not yet emigrated. There are hallmarks of course, but scratched on the other side is the name John Wallace, Feb. 1842. How I would love to know who gave it to him and why 1842 meant so much to him. Also, if I look to the top, near the pommel, there is another scratch – it looks like RW and I think the date is 1900. So these would be my paternal grandfather’s initials. Thanks to my i-phone and writing the blog, I would never have spotted that! 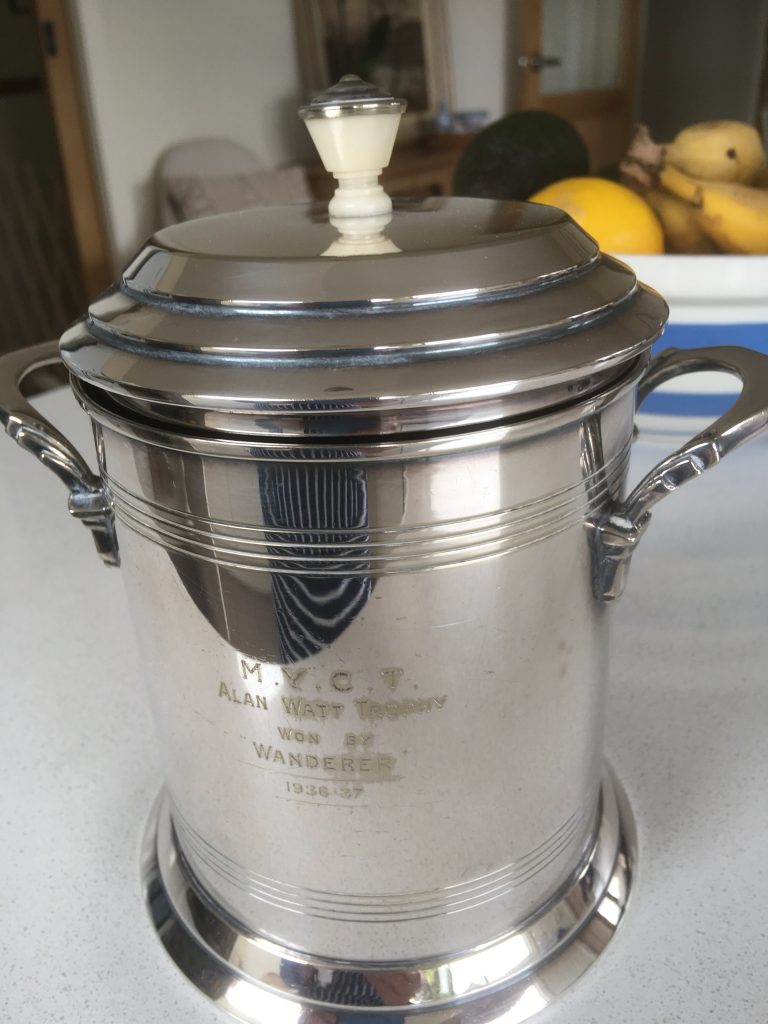 The trophy came from my maternal grandfather, Harold Millington. He won it racing his motor yacht, Wanderer, vessel of my childhood and which carried me to wonderful adventures and sealed my love of the ocean and boats. Mum passed it on to me many years ago and it looks gorgeous filled with bright tulips! My whole life is encapsulated in that trophy. 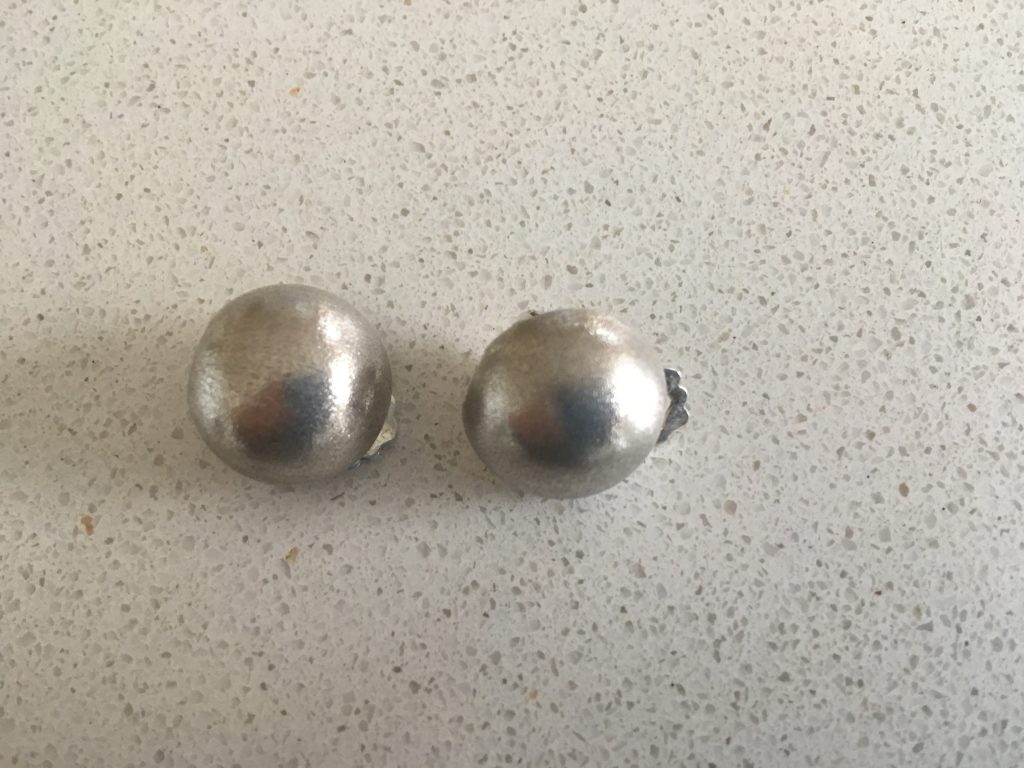 My beloved Mum and Dad bought the silver earrings in Hong Kong for my 23rd birthday. By then I was working in the media, but that’s a whole other story. My parents knew of my love for beaten silver and had walked up and down every alley till they found a silversmith who could make these to Mum’s requirements. 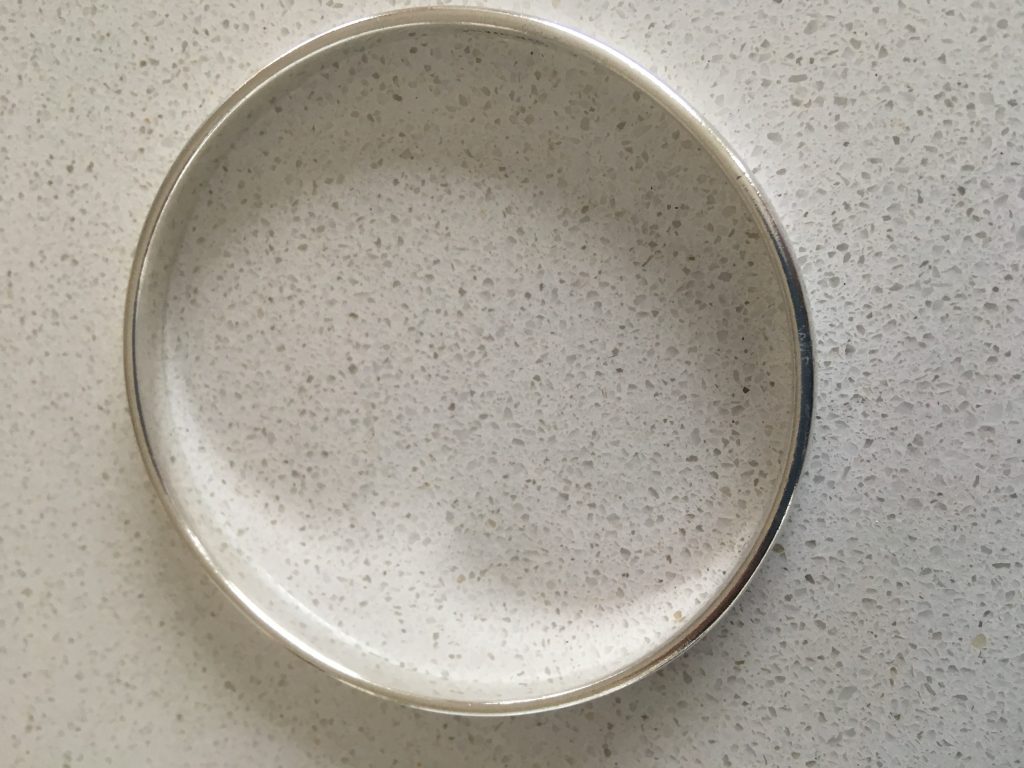 The silver bangle has been part of my anatomy since my husband and I celebrated our first wedding anniversary. He had it crafted by a wonderful Tasmanian artisan, Geoff Roberts. There’s never a day it’s not on my wrist and its getting thinner by the year… 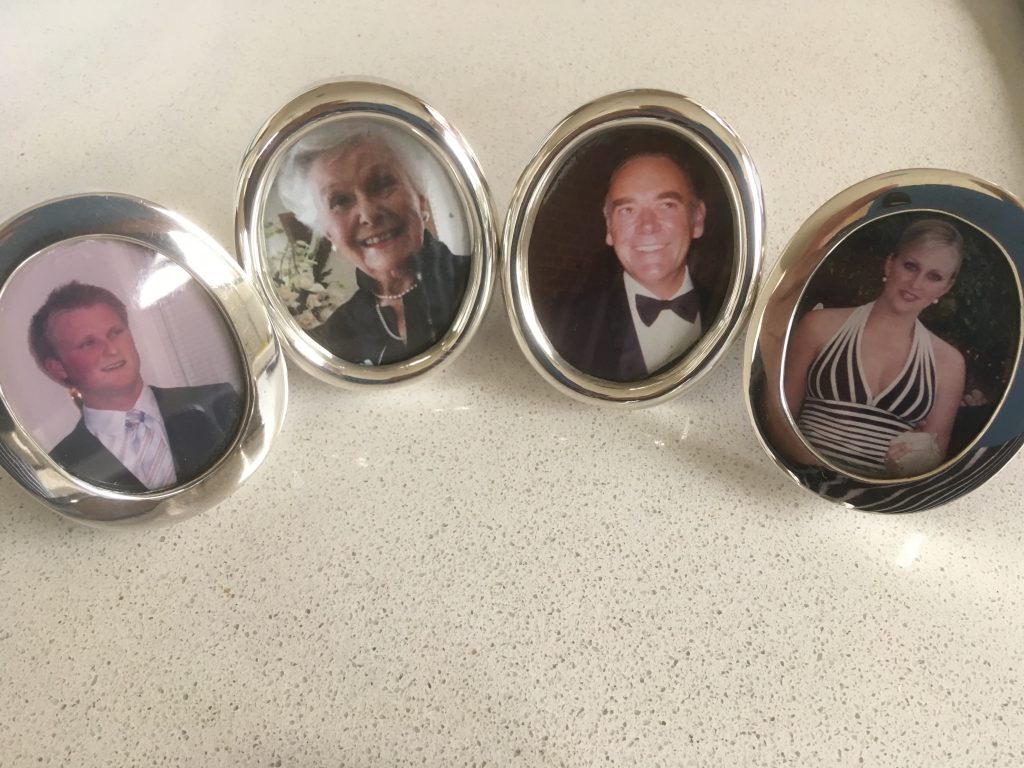 The picture frames – again, Mum and Dad found them overseas. This time in Thailand, another silversmith who made simple, plain work. The backs of the frames are teak and I love their lack of pretension and their size. I inherited two from Mum and two were hers and Dad’s gift to me. 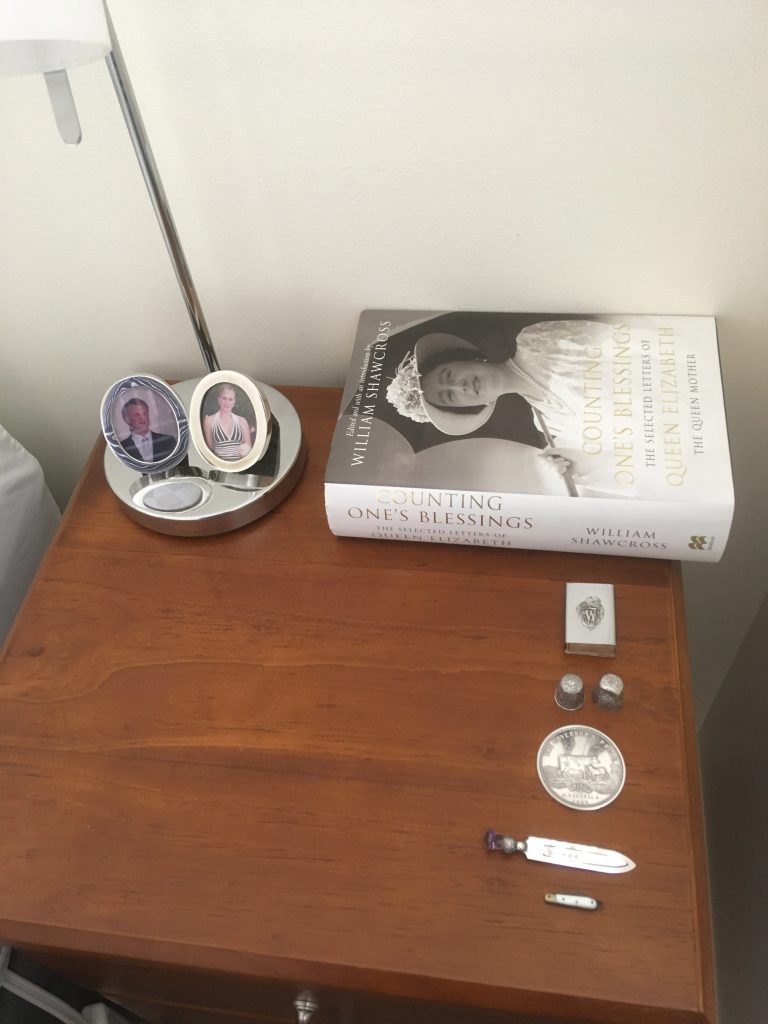 These memories are so important – all family-based and tremendous to share with children and grandchild, to give them a sense of history about the convoluted clan in which they find themselves.

So never be afraid of cleaning! You’d be surprised what wonderful threads of memory you might generate.