Today I read a sharply written post on the role of Dorothy Dunnett in many writers’ lives. 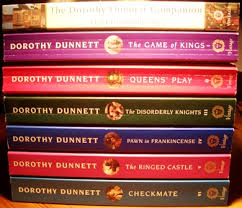 ‘Science fiction giant Kim Stanley Robinson first read the Lymond novels when he was a teenager, and identified particularly with Dunnett’s style: “[Her] writing was lush and her sensibility romantic.”’…

And I thought that was it – once I began writing, I wanted to write very much in her style.

I love the lushness of her language, the density, the impossible romance of her narrative when there is no way that one could label her historical fiction as an historical romance. I love the long, sometimes overblown sentences, the obliqueness of her poetic inclusions. I love that I have to return to a sentence frequently before I comprehend its meaning. I love that with every read (and like most DD aficionados I re-read often), I find something I missed before. 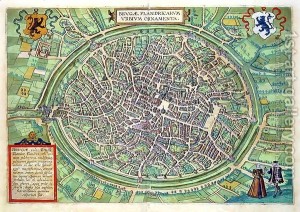 It’s like being taking on a familiar journey but being given a wholly different map drawn by some wildly Niccolo-styled cartographer whereby one must find one’s way through more convolutions than one ever knew existed.

I found Dunnett in a little seaside library – one volume only. The first of The House of Niccolo. The Macchiavellian vein that runs through the novel caught my attention and I became addicted before Claes and Julius had even left the Duke of Burgundy’s bath as it floated between locks near Bruges. 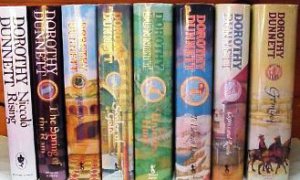 Within days I had finished the book and within weeks had ordered everything that was available at the time. And at that time, I had no thought at all that I would eventually become a published writer of historical fiction and historical fantasy. I only knew that above and beyond any author I had ever read, this wonderful Scots writer would be my favourite.

When the time came and I began to write the first novel I would take to the public, words began to appear and a narrative and language developed. Was it dense? Not too much. Was it obliquely perfect? Not at all. But I found I was writing in a style that was vaguely familiar to me, if not to Dunnett aficionados. If I am objective, I might say that my writing style has a mild lushness, even a poetic manner to it. It’s a style that resonates from deep in my soul outward and I owe that to Dunnett.

So what else have I learned from the eight volumes of Niccolo and the six of Lymond? I learned never to be afraid to write the way I want, and not the way a perceived readership might want me to write. I learned to let my wordage sing and to take my protagonists and antagonists and manipulate them unconscionably if I wanted – even and unto the point of death if it moved a narrative along and no matter how much it might upset my readers. 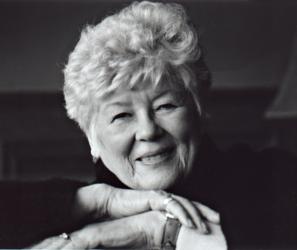 I suppose more than anything, Dunnett taught me to be unafraid. I wished I could have told her what respect I hold for her work but I imagine it is enough that every time I write a word, I think of her and that for me, she will always remain my icon.