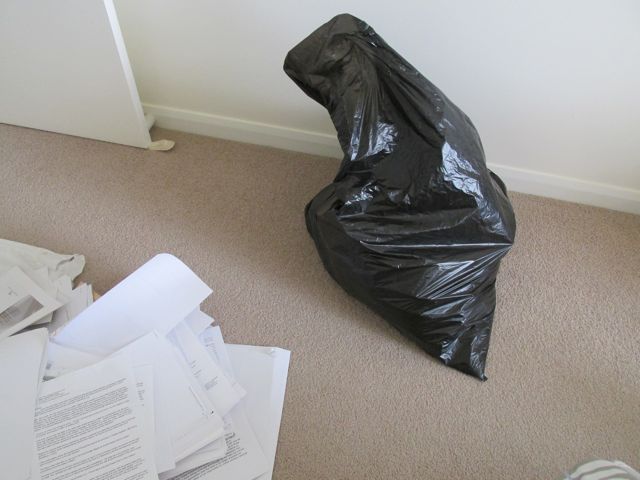 Cathartic! Therapeutic! Almost as good as spending a day at the beach.

Because I have finished the manuscript of G3, and because we are downsizing, I began to sort through my stitching stores. That led to the hall cupboards being sorted and things divided into rubbish and charity.

This then led to my office cupboard and I wreaked havoc!

I’m almost at the point where I can claim to have seven books independently published and it seems to me that there is no place in my life for papers from a mainstream publishing system in which I have no part.

I went through all my ancient files and diligently threw out letters from editors and agents from more than six years ago. ‘Characterisation, pace, settings, imagination’ – all these words used in long congratulatory notes. Of rejection. Binned.

Then years of reports from the UK literary consultancy who taught me more than I can say. Out.

I kept letters that had found their way to me from the other side of the world from readers and I also kept copies of readers’ kind emails.

I filed all my notes for G3 in a Marbig folder and placed each of my manuscripts in their own plastic boxes but need two more boxes for the two most current manuscripts. I found my lifetime’s early writings and placed them in a vertical file.

Then I shuffled everything in the office cupboard around so its easy to find if I needed it. (Note Dave Gaughran’s Let’s Get Digital) The roll of silver discs are stick-on medals for the covers of A Thousand Glass Flowers.

I started gathering together the first of the research books for the new novel. Look out Amazon, here I come!!!

I was also delighted to find the beginnings of a story I had begun at the end of G2. It’s a story set in Regency times about a young lady called Alexandra and I think I may have been having a Georgette Heyer moment. LOTS of work to be done, but it tickled my fancy and has a sparkling sound…

I also found a novella written by myself and two close friends online, but that is most definitely another post. It was a most enjoyable collaboration and led to a terrific partnership that is one of the highlights of my writing life.