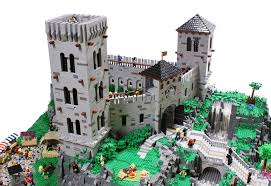 Gosh! I can say with hand on heart and perhaps embarrassingly so, that I have none! Nor Lego, Playmobil, twelfth century costumes, medieval artifacts and so forth. (Actually, that’s not quite true. Thanks to a very able researcher/friend, I have a tiny piece of a twelfth century commanderie in Provence.) But apart from research texts, how does one get that idiosyncratic ‘feel’ for the timeframe?

Well, one obviously visits and makes notes in diaries and journals. But what else?

Living in a far-flung corner of the Antipodes where museums and libraries with extensive medieval collections are an expensive distance away – it truly does become a lesson in effort and make-do. 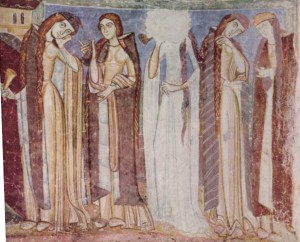 The local amateur theatrics wardrobes and fancy dress shops can hire out medieval gowns like a bliaut. It is the catch of folds round the legs that matters after all, or perhaps the flapping sound of a cloak around one’s body in the wind.

Sometimes, one of the local antique dealers, a collector of weapons, has provided a dagger or a sword that is suited to my era. 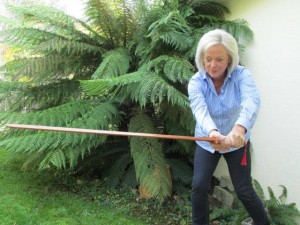 And my own Taichi practice sword, sized to a woman’s height, allows swing and grip to be experienced. 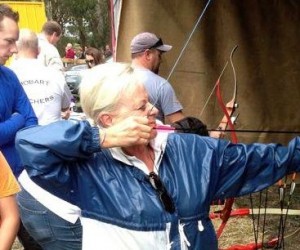 The local archery club provides the experience of the draw of a bow and the loose of an arrow. 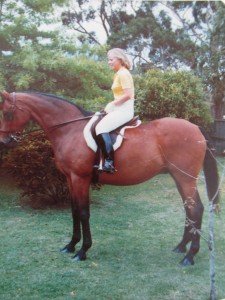 And one’s own horse provides the experience of the gallop, the dismount and let it be said … the fall.

It would be wonderful to look up at the wall and see a long bow mounted there, or perhaps even the quaint upturned nocks of light Saracen bows, or maybe even a small sword suited to a woman of five foot three. But it is not to be, nor likely, so I must instead convince my reader that I have indeed felt the feathers of an arrow against my cheek and the scream of a taut shoulder muscle as I’ve drawn the bow.

Likewise, I must prove I’ve felt the sweep of a blade and heard the whisper of a sword swooping through the air. I’ve also suffered the slip of a sword hilt in a sweaty palm.

Have I been successful in convincing my readers? 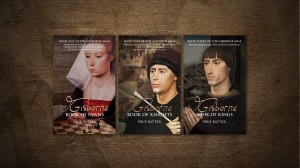 So perhaps time, in its truest sense, is telling. I must be doing something right according to the reader’s willingness to keep purchasing. That’s so heartening, especially as a further historical fiction novel is underway as I write this.

*And as an afterword, my blog posts maybe a little sporadic till Christmas as we have sold the family home and are moving. Wish us luck!*

« Sleepy…
All things white and beautiful… »