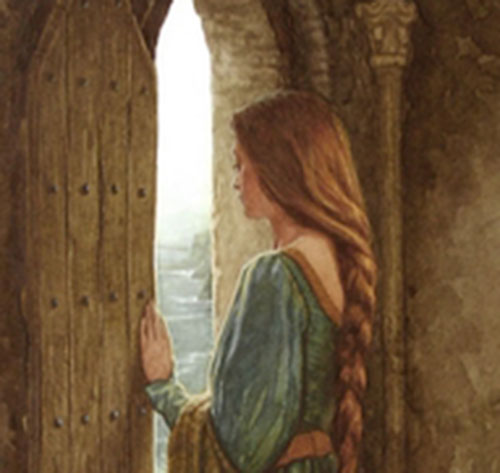 Her name is Ysabel, an English noblewoman – the child of an Occitàn noblewoman and an English lesser baron. She is also a god-daughter of Eleanor of Aquitaine and grew up in the company of her Plantagent god-cousins. She is a fictional character who just happens to be associated with the legendary Sir Guy of Gisborne.

In the third and final book of the trilogy, The Gisborne Saga, Ysabel, who is the narrator of the story, is found in twelfth century Venice (Venezia) with her son, William, and her loved but enigmatic husband, Sir Guy of Gisborne. The Third Crusade has just concluded and Richard the First is on his return to reclaim his kingdom and duchies when he is abducted and held for ransom. I am offering no spoilers, but owing to a shattering event within Gisborne’s and Ysabel’s lives, they find themselves declared traitors by Eleanor as they travel through Angevin France to Plantagenet England.

Ysabel’s story began in the first book, Book of Pawns, where she was an indulged, self-opinionated young woman. Beset by a tragedy, her manner of coping – intuitive, irrational and damning – was the mood of the first one and half books of the trilogy. But then she began to alter as she became more involved with Sir Guy. Has she succeeded in changing for the better despite the fractured values of her world? You must read the trilogy to see…

4) What is the main conflict? What conflict disturbs his/her life?

Men and the need for revenge, from princes through to peasants, cause the conflict in her life. She has two choices – to beat them at their own game or to join them. Her life and her family’s lives are at stake otherwise. It is a decision of immense bearing…

To be safe and secure with her child and her husband, perhaps somewhere in the far reaches of the Holy Roman Empire or even the Byzantine Empire. To be as far from the throne of England, its turmoil and its claims of treason against her family as she can possibly be.

The novel is called Gisborne: Book of Kings. There are various posts about the progression of the novel and indeed about the trilogy in the blog archive.

Late May of this year. Not long to go.

A brief blurb for your interest – and as a way of enticing you, let me say the first two of the trilogy have ranked in the Top 100 Paid (Kindle) in the UK for Medieval hist.fict and Biographical fiction for 9 months now, so here’s hoping the finale can follow its family in the same way:

In this final book of The Gisborne Saga, Gisborne, spymaster and valued knight of Richard Lionheart, is forced into a fierce duel in which his wife and son are thrust round the board in a brutal game of revenge.

Is it the Knights Templar who seek to avenge their own? Or is it Eleanor of Aquitaine who claims Gisborne is a traitor to England?

Or is it someone from Gisborne’s own cadre?

I would like to invite SJA Turney, Ann Swinfen and Lucinda Brant to follow me in this Main Character Tour.