Desert Islands and Castles of Dreams…

I first met Sharon Bennett Connolly through The Review on Facebook – just quiet interactions that always left a positive mark behind. But most lately – she has been trailblazing! Her book, Heroines of the Medieval World, is acquiring rave reviews and fully endorses her blog which she entitles ‘History – the Interesting Bits.’

And that’s the thing, isn’t it? History ‘can’ be boring, overdone and heavy but Sharon takes the truly interesting facts and runs with them, injecting light and life into what ‘could’ be a crusty subject. It’s therefore with interest that I see she has become castaway on Bodiam Castle! And yes, it is surrounded by water, therefore an island, so why not? Sharon, you book list intrigues. 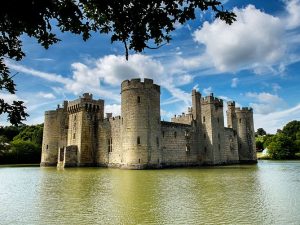 I love reading – it’s my escapism. If I were trapped on a desert island I would, of course, rather have my Kindle, with hundreds of books downloaded. Choosing just 10 to take with me is an almost impossible task, and the 10 listed would probably be different this month to last month. But, if I was only allowed 10, then I suppose it would have to be: 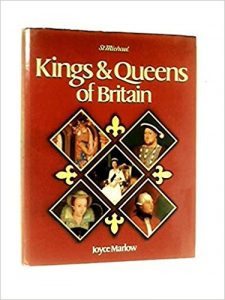 The Kings and Queens of Britain by Joyce Marlow is my best-loved book. I got this book when I was 9 or 10 years old and it has been with me ever since. It is well thumbed and the dust jacket is a little ripped in places, but the condition of the book itself is immaculate. It has some wonderful stories in it and was probably my first ‘proper’ history book. I will still pick it up today and spend half an hour going from one monarch to another and studying the family trees. It was a wonderful introduction to history for me. 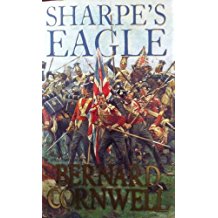 Bernard Cornwell is my all-time favourite author. I have read – devoured, more like – every single one of his books. It would be almost impossible to pick just one to take, but if I was forced, I suppose I would have to go for Sharpe’s Eagle. It was the first ever Sharpe book and is fabulous, full of adventure and suspense. Richard Sharpe is the hero, raised from the ranks after saving Wellington’s life, he is an officer, but no gentleman – and a fighter through and through. It was the story that developed my fascination for the Peninsular War, the French Revolution, Wellington and Napoleon. Although, maybe I Should pick Sharpe’s Waterloo? Another fabulous book – and a fair bit longer than Sharpe’s Eagle. Decisions, decisions! 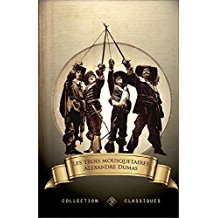 My favourite classic author is Alexandre Dumas; D’Artagnan is the ultimate hero! The Three Musketeers is a story full of adventure, intrigue, suspense, love, tragedy and even little humour. The heroes are fabulous characters – everybody has their favourite out of Aramis, Athos and Porthos (mine is Athos). The villains are particularly dastardly – with Milady de Winter and Cardinal Richelieu being two of the greatest literary villains ever created. I was lucky to learn French in school and although I read The Three Musketeers in English first, I prefer it in the original French; there are some subtle nuances that don’t translate perfectly into English. If I could take only one book – it would be Les Trois Mousquetaires! 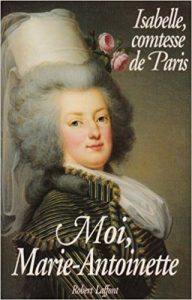 Another French novel I love is Moi, Marie Antoinette by Isabelle, Comtesse de Paris. I bought it in Paris whilst I was working at EuroDisney in 1993 and it always reminds me of that summer. Working for Mickey Mouse was a great experience – as was living so close to Paris for 6 months. I really got to indulge my inner history geek, visiting Versailles as often as I could, touring the Musee de l’Armee and Napoleon’s tomb. The book is, of course, an ultimately tragic story; told with great sympathy it gives you an insight into Marie Antoinette – not only as queen, but as a mother – and shows the French Revolution from the point of view of the monarchy. 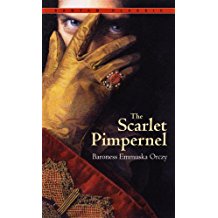 My next book is Baroness Orczy’s The Scarlet Pimpernel – I’m beginning to see a French pattern in my book choices. I don’t know whether I read the book first, or saw the film with Anthony Andrews. Whichever it was, I was hooked and read all the Pimpernel books, one after the other. The stories are wonderful creations, not very historically accurate, but so well written that you soon learn to ignore the discrepancies and just enjoy the ride. 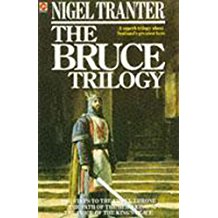 I have to include a book by Nigel Tranter. The Bruce Trilogy is officially 3 books (The Crown in the heather, Worth Dying For and The Honour Due a King) – but I read it in the omnibus, so I’m cheating. It awakened a love of Scottish history, and particularly Robert the Bruce, which I have never lost. Nigel Tranter’s writing is incredible and the depth of research shines through. I devoured practically every book Tranter had written, one after the other, in the mid-1990s, but the Bruce Trilogy was the first and best. The story has stayed with me and, as a result, the Bruce women – his wife, daughter, sisters and Isabel McDuff, who crowned him – survived being hunted through Scotland by Edward I’s men, before being imprisoned for 8 years, some of them in cages. Their stories are very poignant and were included in my book, Heroines of the Medieval World. 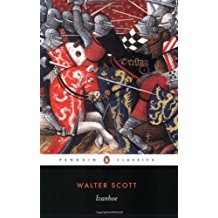 Another classic that I love is Ivanhoe by Sir Walter Scott. Scott used my ‘local’, Conisbrough Castle, as the setting for the Saxon stronghold. Which was ironic, really, seeing as the castle was constructed by Henry II’s brother and had been in Norman hands since its previous owner, King Harold, had been killed at Hastings. I remember trying to read Ivanhoe as a 13-year-old, but I found the 18th century language difficult to tackle. However, when I revisited it while at university, I fell in love with the story and have reread it several times since. 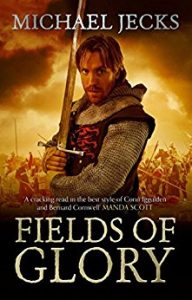 Sometimes I pick a book by the author. Another of my favourites is Michael Jecks. I have been reading his Templar Mystery series since the first book, The Last Templar was published in 1995. However, my favourite Jecks book is Fields of Glory. A departure from the 30+ murder mysteries he has written, Fields of Glory is set in the Hundred Years War and is a magnificent tale of Edward III’s Crecy campaign. The story-telling is masterful – and has taken on a frenetic energy of its own. 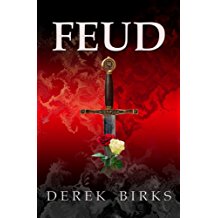 I cannot have a Desert Island Books without including Derek Birks’ Feud. Set in the Wars of the Roses, Feud tells the story of the Elder family, with Ned Elder having the tackle numerous enemies in order to support Edward IV and recover his inheritance. Feud is the first book of the Rebels & Brothers series and is a fast-paced, riveting read. The first time I read it, I devoured it in one sitting. Derek Birks created a unique story with such a frenetic energy that I can’t wait for the books to finish – but I’m devastated when they do. And he has created the perfect heroine in Eleanor (Nel) Elder, a woman not afraid to use her feminine wiles, but manages to get herself into trouble frequently and is more lethal with a sword than most men. 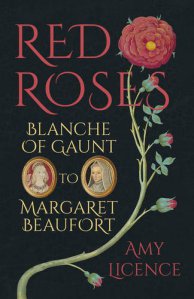 The last book I would take is Amy Licence’s Red Roses: from Blanche of Gaunt to Margaret Beaufort. A non-fiction book, Amy Licence’s writing style brings to life the lives of the women of the House of Lancaster. Meticulously researched, this book is a thoroughly enjoyable read. The author engages with the reader from the outset, drawing you in to the lives of these varied and remarkable women, demonstrating how they all fit together in the story of the House of Lancaster, like the individual pieces of a jigsaw. In short, this is a wonderful book,

As for my desert island. Well, I have never liked being anywhere where I am too hot, so I would probably choose somewhere close to the UK, and a little quirky. Am I allowed to have a castle? Something like Bodiam would be ideal. Surrounded by moat – so it is, essentially, an island – and steeped in history. It would be my perfect idyl.

Thank you so much, Sharon. I am particularly pleased to see two contemporary authors present. I have been a fan of Jecks and Birks for a little while now and endorse those choices. And of course, The Scarlet Pimpernel is a given!

If you would like to learn more about Sharon and her thoughts, go to www.historytheinterestingbits.com