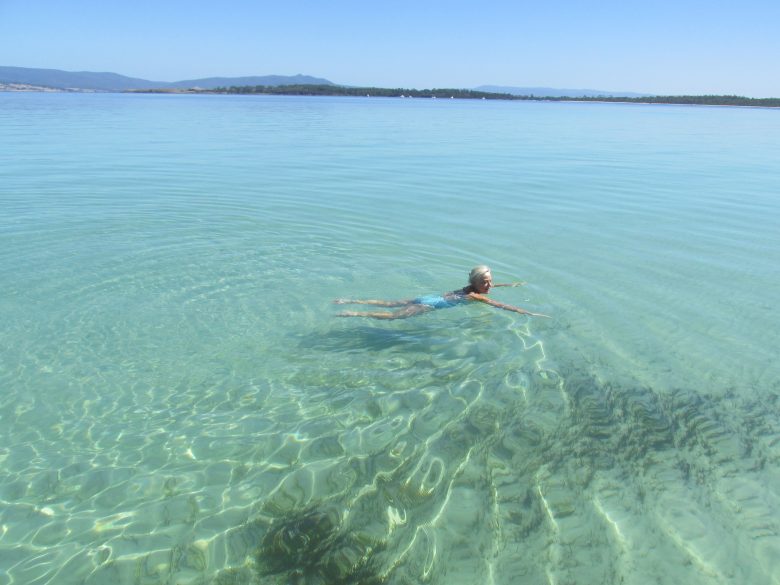 “I went down in the afternoon
to the sea
which held me, until I grew easy…” Mary Oliver 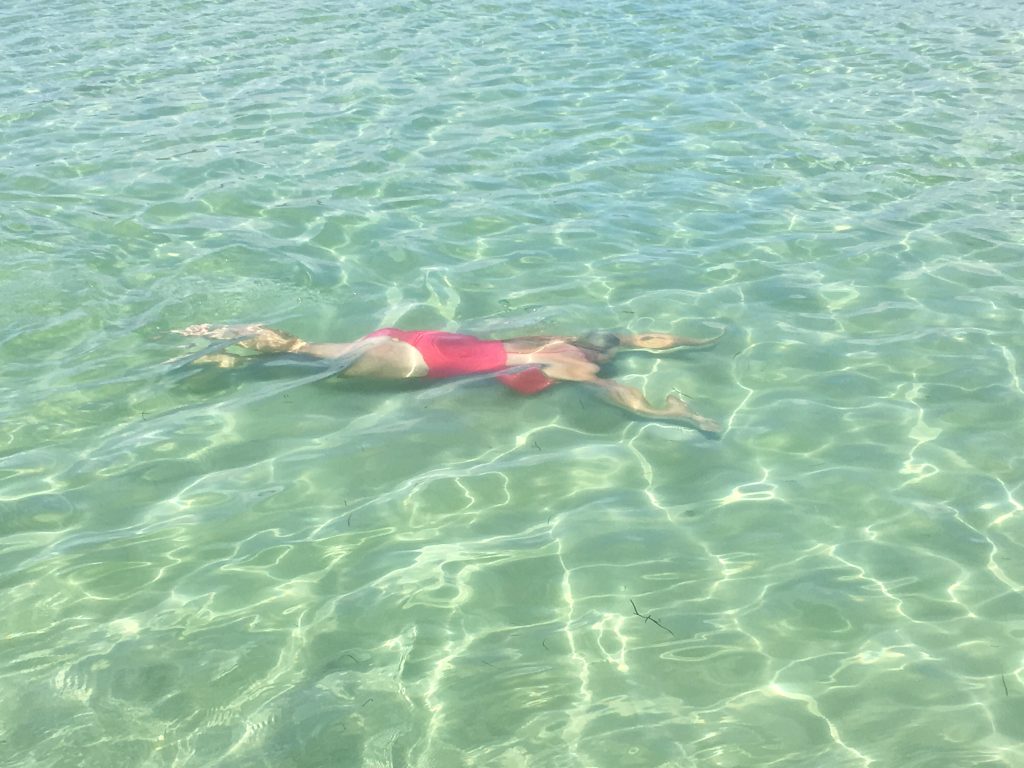 My life is largely defined by the sea. In summer or winter, each day is coloured by whether I’ve been able to walk alongside the sea or immerse myself in the sea or float atop the sea. The days I remain citified are a trial, as if I am some sea creature thrown far up onto a shore and gasping to be returned to where I belong, desperate for the tide to turn to climb the sand and rocks, reach me and pull me back out to where I can breathe and feel freedom. 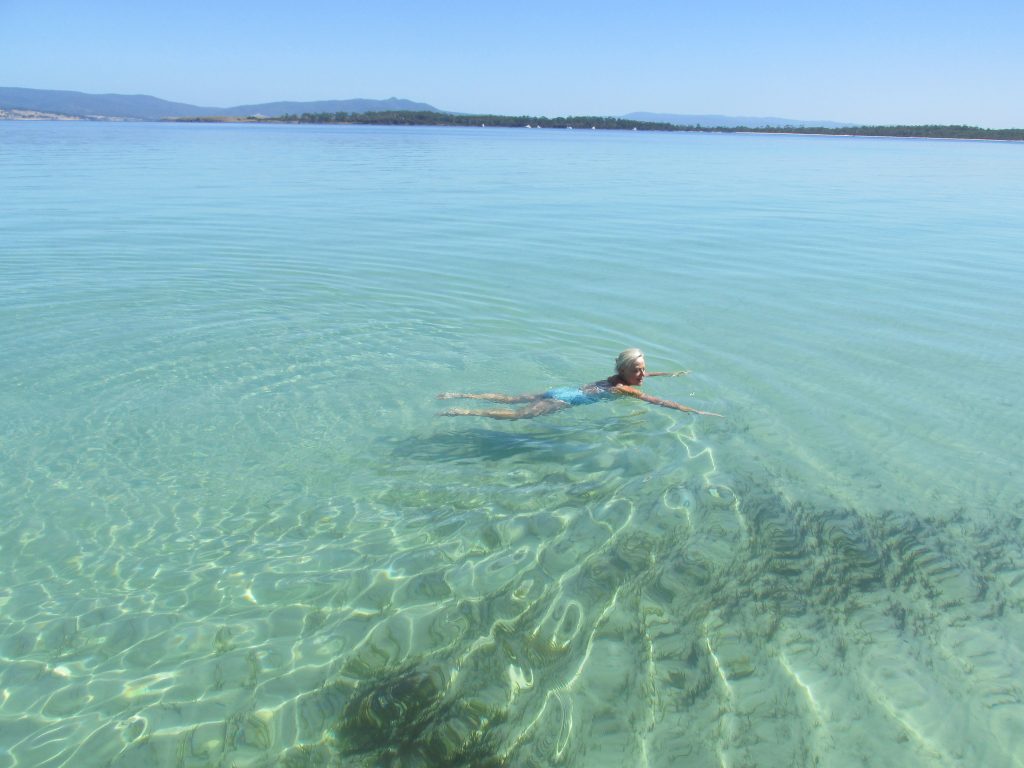 I often try and analyse my relationship with the sea, but it’s like reaching for a cloud of vapour. Any meaning just slips through my fingers. Maybe it’s just a lesson in accepting that some things are right for one. That they slip over your psyche but can’t be grasped or moulded. The phrase, ‘It just is’ comes to mind.

I’ve not been sparking on all my cylinders lately and when I finally returned from the Big Smoke last week, I knew my body and soul needed a reboot of the seaworthy kind. I pulled on one of my swimsuits – an orange one, a mandarin shade and apart from wearing my Mum’s red swimsuit, it makes me happier than wearing any other pair. The air temperature is now high-summer and the water has benefited from the Eastern Australian Current, a tidal sweep of warmth that threads down the eastern side of the continent. It often brings beasties – lions’ mane jellyfish (translucently pink and graceful) and bluebottles (azure masters of a wind-driven swell) but one times one’s swims.

I walk straight out into chest deep water and sink below the surface. It bites my body at first, a primal shock that grasps at the bones, even the heart, but I sit with it for a moment and the body yields and the water warms around me, the body warming with it.

I become at one with the sea, lifted and released in any wave and all around is the turquoise of sea and the white sand glistening beneath the water. Here and there, maybe a leathery strip of kelp ripped from the ocean floor in a previous storm, or maybe a handful of bottle-green seagrass. If I’m lucky, I’ll see the diamond flash of baby mullet or salmon as the shoal flip away from the swift shadow of a tern. There may be, as my feet reach for the sandy bottom, the triangular shape of an eagle ray or a skate. They come close, but not enough to invade my space, and then glide smoothly away, to swim in the large circle that is their domain.

The sea creatures and I respect each other’s space. I think they know that I am but a temporary part of their world and will soon be gone while they swim on.

I value the elevated mood the sea gives me, that way salt encrusts my body and drags on the fibres on my clothes for the rest of the day. I will never understand those who swim and then dash to the nearest shower and wash it all off. Why bother swimming at all? Why not just use the shower and be done with it? What a waste! 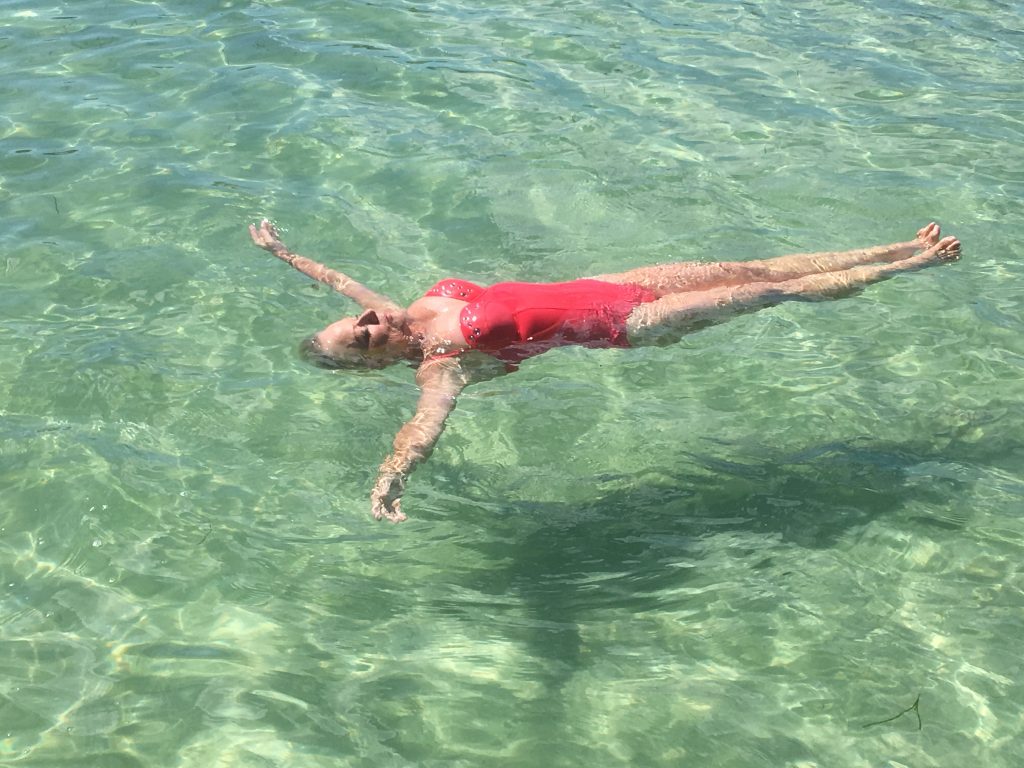 I love lying like a star on the surface and listening to the tick-tick language of the sea. Some will tell me it’s the sound of boat propellers churning the water, but I disagree. Summer and winter that same sound echoes in the shallows and deeps and I believe it’s the combined sound of many creatures – whales, dolphins, seals, fish of all kinds – even crabs, lobsters, octopus. So many creatures whose grace in their own world makes our stomping around on land look so petty. Surely there’s never a silence in that vast watery world…

“The swimmer knows something of the sea.
But he can’t speak it because while he swims
His face angles down
Beneath the surface.” by Steve Mentz

It’s true, you know. We sea swimmers do know something of the sea but in my case, it’s a secret language that I haven’t quite found the key to. I don’t mind if I never do, really. It’s enough that I can swim and that it rejuvenates. Every swim is a new experience that reaches deep inside – a good feeling. It never ever gets boring. I hope I can swim forever. Age may make style a little less malleable and distance shorten, but who cares? One adapts.

That’s the way of it…

PS: This link takes you to a wonderful post on sea swimming, with an excellent Youtube mini-film about ocean swimming… https://theconversation.com/why-going-for-a-swim-in-the-ocean-can-be-good-for-you-and-for-nature-150281