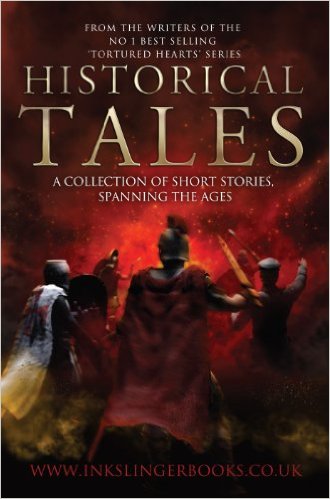 A collection of short stories spanning the ages, from the writers of the No 1 best selling “Tortured Hearts” series.

Fronto & Sybil – By SJA Turney – Set between Marius’ Mules books 4 & 5: Fronto visits Rome’s most famous oracle in the company of she-who-must-be-obeyed. Dreadful portents are fated to be revealed in the caves of Cumae.

The Gladiator – By Paul Murphy – It’s judgement day for Danaus, the Empire’s favorite gladiator, when he finds the past betrayal of his family, through a stolen love with a Senator’s daughter, catching up with him on the sand of the arena floor.

The Pict – By Gordon Doherty – Urcal has known only the bitterness and brutality of war for so many years. But in his final hours he returns to the Wall where it all began, and comes face to face with his dark past.

Holmgang – By Tim Hodkinson – 941 AD. A Norse-Irish village cowers, expecting attack at any moment from a crew of ruthless vikings. A stranger arrives from the sea: Is he friend or foe?

Gisborne – By Prue Batten – The King’s man – as he nocks his arrow he wonders, is he a kingmaker or a kingbreaker?

The Conqueror – By AJ Armitt – As Mehmed the Conqueror’s army draws closer to the gates of Târgoviște; an encounter with a captured knight throws the likelihood of an easy conquest into doubt.

Onna Bugeisha – By SJA Turney – The widowed lady Shimoda Kumiko fights an impossible battle to defend her poor village from bandits, while a powerful ninja spins deadly webs among the powers of the province.

Thirteen – By Jon Dickman – In the aftermath of the Gunpowder Plot, two friends, condemned to death, are reunited and discover a higher treachery.

Trooper Jane – By SJA Turney – In the aftermath of the battle of Marston Moor, Oliver Cromwell pays a visit to the home of Sir William Ingilby in search of the Royalist officer who tried to put a bullet in his brain.

Conviction – By Prue Batten – Banished to ‘the arse end of the world’, a convict battles mind and body to stay alive and make sense of his punishment.

The Penitent – By Rob Wickings – Sister Carmen always believed that St. Ignatius was a refuge for women in a world where they were treated more than harshly-until Mary arrives to show her that forgiveness is just another form of sin.

Known unto God – By Jon Dickman – A deadly game of cat and mouse plays out beneath the blood soaked fields of Ypres. Lost in the deeper darkness, the hunters become the hunted.

Master Plan – By Robert Brooks – The Black Forest, Germany, and as the allies close in Hitler continues to plot while the Third Reich teeters towards its inevitable fall.

Outstanding authors, these short stories were great. Quick to read and left you hanging for more. Highly recommend. Wish their were more stories.