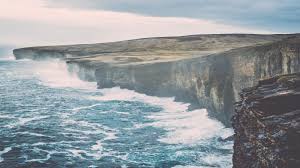 I first met Ann Swinfen a few years ago.

I had been an indie author for some four years and she had been a mainstream author but was considering the indie path and she contacted me for advice and information. Since then she has scorched a path with frequent releases in print and e-pub and recently began to tread the path of audiobooks. She is an elegant writer, knowledgable of her field and now has a dedicated following. I asked Ann to cast herself away and let us know what she would read whilst so isolated…

I’ve used two criteria in choosing my ten books: substance and influence. If one were to be restricted to so few books, some of them would need to be substantial. And if the selection is to be meaningful, some would need to be books which have influenced my life. 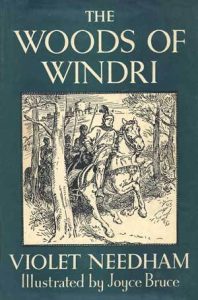 I’ll start with my childhood. I had a rather odd, piecemeal education, and when I was nine I spent one term at a PNEU school (Parents’ National Education Union). The curriculum was unusual and enlightened. Every term the class studied one Shakespeare play and performed a shortened version of it. We did Julius Caesar. This introduced me to Shakespeare, to the theatre, to acting (I played Caesar), and to the Romans. I can trace the origin of my love of literature, of history, and of languages to this point. Shortly afterwards, for my tenth birthday, my aunt and uncle gave me Violet Needham’s The Woods of Windri, which sowed the seed of a lifetime’s love of the medieval era. To this day I can read it with that shiver of remembered delight, for it brings to life a vivid sense of the times, with no modern condescension and no ‘gadzookery’. Odd, when I look back, to realise that so much of what I was to become was shaped during less than twelve months. 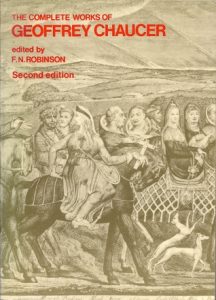 The Complete Works of Chaucer

When I was twelve, I had a wonderful form master, Charlie Danner. He must have seen something in me worth nourishing, for he used to spend the school lunch hours reading The Canterbury Tales with me. How many teachers would do that? I was entranced, both by the language, and by the realisation that although these stories had been written by someone in the fourteenth century, I could actually read them myself. (Later, when I was working for my A Level English, the teacher insisted that we ‘translate’ Chaucer. I was outraged.) There is something for everyone in The Canterbury Tales – tragedy, comedy, lofty emotion and low farce. It was Charlie Danner who first urged me to go to Oxford, and instilled that dream in me. He left teaching at the end of that year, to train as an Anglican vicar. As a parting gift, he gave me a copy of Goodbye, Mr Chips, inscribed ‘For Ann, who was not a dull oaf’. 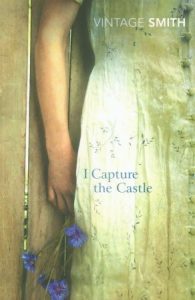 I Capture the Castle

In my early teens, I read Dodie Smith’s I Capture the Castle. It is a book which has never lost its appeal, from its wide range of eccentric characters to its sensitive handling of the relationships between them. I think I probably unconsciously identified with Cassandra, the narrator, who aspires to become a writer and is training herself by writing down her observations of her family and friends. It also contains a scene which never fails to make me laugh, when Cassandra – and her sister and stepmother – dye everything green – including themselves. 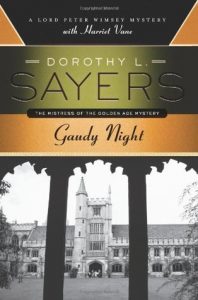 Also in my early teens I read Dorothy L Sayers’s Gaudy Night. It would be some years before I read her other books, but this one made a profound impression on me. Why? I suppose because it is so much more than a detective story – it is a joyous celebration of all that Oxford and scholarship meant to Sayers herself. It was a time when I was beginning to value and aspire to scholarship, and Sayers put into words the feelings I was clumsily trying to clarify for myself. The women’s college in the book is called Shrewsbury, but it is Somerville, thinly disguised and moved to a different location. When I went up for my scholarship interview at Somerville, I found myself looking for points of reference from Gaudy Night. So it was this book which determined for me which college I chose. At Somerville I met the friend who introduced me to my future husband, so it has a lot to answer for! 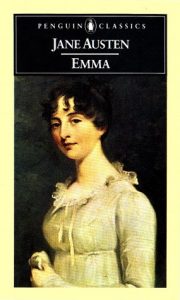 For our A Level English, we had one Jane Austen amongst our set books. Unfortunately, it was Mansfield Park, still my least favourite. It very nearly put me off Austen for life. Happily, in my first term at university, I came across a boxed set of Austen’s novels, duodecimo, bound in pale blue cloth, quarter bound in dark blue leather, with gilded edges and silk ribbon markers. I have to admit that I bought it as much for its beauty as anything. Then in the Christmas vacation I had a nasty bout of flu and read my way through all of them. I have never looked back. Difficult to decide which, but let’s choose Emma for now. 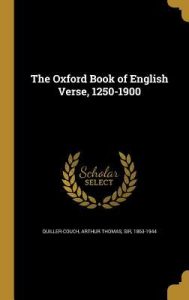 The Oxford Book of English Verse

Somewhere around the end of school and the beginning of university, I acquired The Oxford Book of English Verse. This is another of my ‘meaty’ choices. Something here for every mood. It would be lonely on a desert island, but dropping in to this anthology one could listen to so many different voices, over so many centuries, it would help to combat loneliness. And isn’t that what so much of reading is about? A dialogue between writer and reader. 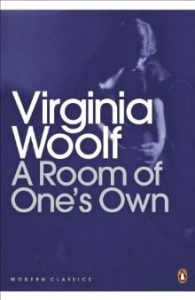 A Room of One’s Own

Virginia Woolf’s long essay, based on a series of lectures, is my only non-fiction choice. Woolf belonged to a generation of women who were fighting for recognition as the intellectual equals of men, especially in the field of literature, and this was a seminal work. Our generation has been luckier, but even now the inequalities persist, even though they are sometimes disguised. I have not escaped being patronised, from time to time, and younger women too have not reached that desirable goal of equality.

Now for some sturdy classics, always good to reread: 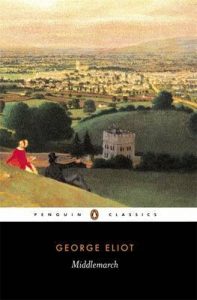 I am an admirer of all George Eliot’s work, and of her courageous life, but I feel that Middlemarch is her greatest achievement. In it she manages to portray a whole society, so that we have both a wide spectrum of individual stories, and a sweeping overview of an entire town and countryside. I don’t think there is anything else quite like it. She cleverly persuades the reader to sympathise with characters like Dorothea and Fred, and yet also to want to kick them from time to time! Casaubon’s letter proposing marriage is one of the cleverest and most appalling passages in any novel. The richness of the whole work is also made up of tiny details, like Dorothea earnestly designing cottages for the poor, and Rosamund tatting when gentlemen call, because it allows her to display her dainty foot without censure. 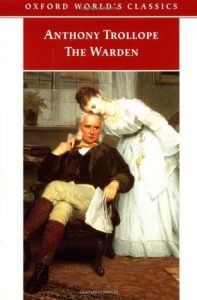 I enjoy almost all of Anthony Trollope’s books, but The Warden holds a special place in my affections. Partly because it was the first one I read, but mostly because I am so fond of Mr Harding, the warden. Although there is satire here, it is fairly gentle, not as savage as it could sometimes be in Trollope’s other books. The story pinpoints a particular episode in nineteenth century history, when historic anomalies in church practices were being eliminated by zealous reformers, who were often too blinkered to realise that they often did as much damage as good. Yet the particularity can be seen as reflecting other such episodes at other times. A salutary read. 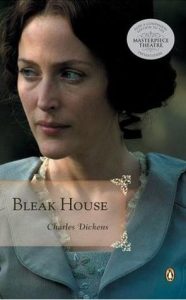 I think we must have a Dickens – plenty of reading in Bleak House. Like Middlemarch, it is very wide-ranging, from the gentry and aristocracy down to the poorest of the poor, but one of the things I find most interesting about it is Dickens’s innovative narrative technique. As far as I know, he was the first person to alternate between first person and third person narrative. It must have seemed quite extraordinary at the time. As always with Dickens, a richly evocative picture of his contemporary society. In Esther Summerson he portrays a much more believable character than the shallow young women of his earlier novels, and Lady Dedlock is a complex study in self-denying repression. Inspector Bucket is, of course, one of the first detectives in literature. 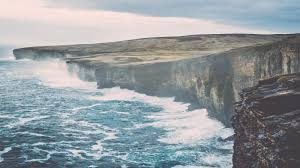 Well, there are my ten. Looking over them, it’s intriguing to note that the most influential ones were all read before I was twenty-one. I think that tells us something about how important reading can be for the young.

If I am to choose my desert island, I think I will choose somewhere in the Orkney Islands. Some are inhabited, but I am sure we can find an isolated one.

Thanks for inviting me, Prue!

If you want to find out more about Ann, go to annswinfen.com

And that’s the end of Desert Island Books for this year, dear readers. I hope to have the series running again next year and hope you will join me in between times, for an eclectic Australian summer collection of posts.