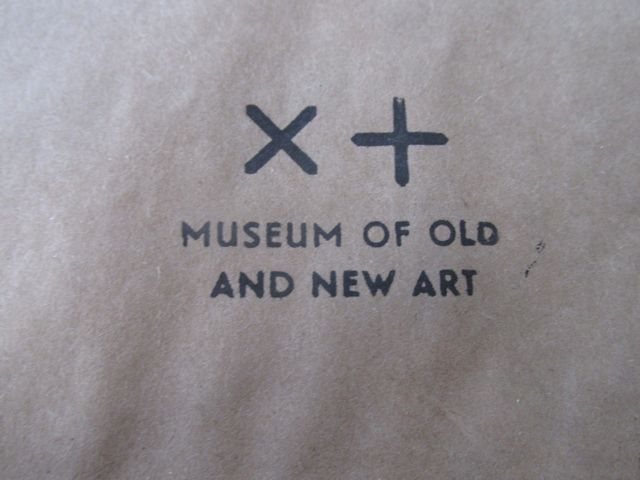 There is an internationally recognised art facility in town – MONA, the Museum of Old and New Art. 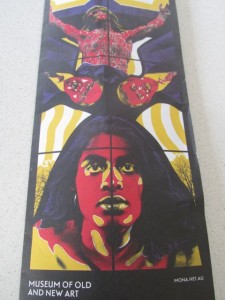 Till now, my husband and myself have always found other things to do than visit this fine collection. People would say ‘You haven’t been yet?’ and we’d sheepishly say, ‘No…’ 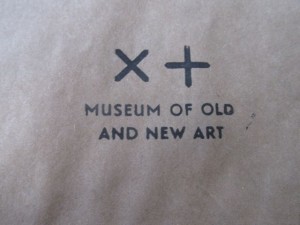 ‘Because we like the country and the great outdoors better.’

But that answer never served us well because we were thought to be culturally deficient. 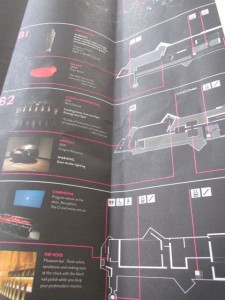 I woke up today and gazed at the grey skies and said that I felt the time had come. For me, the attraction would be the boat trip to MONA and back.

I have a great affection for our river and the way our town slumbers along the shores – the houses looked like baby chicks, the mountain behind much like the mother hen. 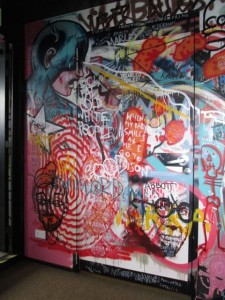 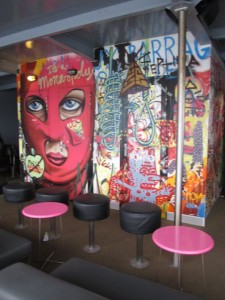 I knew I was in for an interesting afternoon when I saw the graffiti-covered toilets on the ferry. 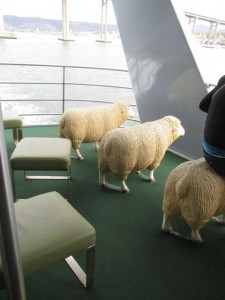 And when I sat on the back of a sheep on the port side and on the starboard side there was a shiny white acrylic bull. All a bit of a giggle…

We climbed 90+ steps to the award winning building. 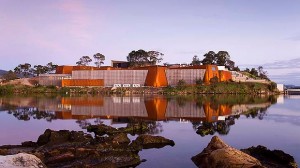 To be met by a curious Victorian lacework semi-trailer. 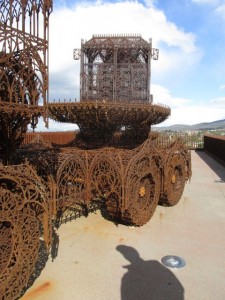 Maybe my mind was in Constantinople during Ottoman times, because I felt as though I was looking through some kind of screen within a harem. 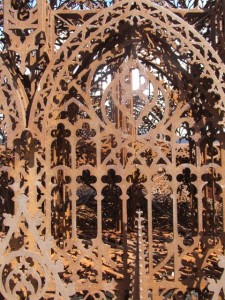 To be honest, it was beautiful. Layer upon layer of exquisite metal work and whilst we looked into it, children played with massive prayer bells on the other side of the court, the most exquisitely sonorous ‘dong’ ringing around the grounds. 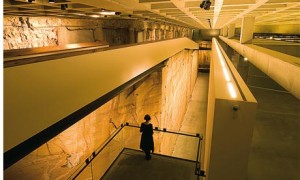 We found our way inside the Museum and began a climb down into the bowels of the earth, the building having been sculpted from the sandstone shore. For me, those wonderful amber walls, backdrop to many of the installations, were an art-form in their own right. They created an ambience and a timbre, as sound echoed back and forth.

Many of the installations left me cold. I couldn’t even begin to wonder at what tortuous creative spirit had produced the work.

I came across a tiny little hedgehog, taxidermied for posterity in a glass dome and in amongst the satanic dark of the Museum, this little animal seemed to exist with fairies. 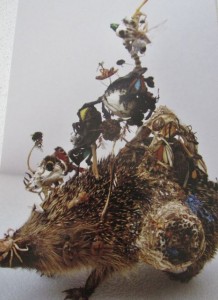 He was at one with all forms of nature – bugs, beetles, a honeycomb and more, and as odd as it may seem, it spoke of enchantment and fantasy. Unable to take a pic, I’ve relied on a postcard from the Museum shop – the over-lit image doesn’t do the piece justice. It needs that sombre shade in which, perversely, to shine.

The next piece is quite simply breathtaking – a waterfall against the backdrop of the umber walls, lit and plumbed in a way so that as the water falls, so it spells out words. 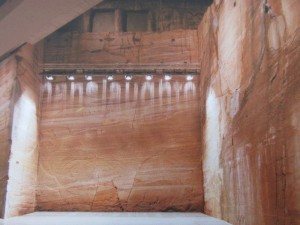 I was sold. The minute I see text in artwork, I am sucked into the very essence of the piece and this sang to me. It’s harmony, beauty and perfection.

Already breathless and filled with the idea of text, the final piece swallowed me whole with the very absence of text. 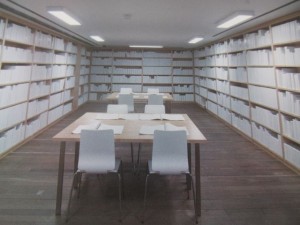 Entitled The White Library, can you imagine what it is like for a writer to enter a room filled with blank books with white covers? How hard it is not to walk to the tables and take up a pen and begin to write a story upon the virginal sheets of parchment?

I stood there waiting for all the words from my peers’ e-books to come flying through the door and fill the empty books with their magic and mystery. Isn’t it strange that the very absence of the word just filled my imagination with language?

Once upon a time, this Museum was a small Classics Museum owned by an Italian migrant with immense vision. There was nothing I liked more than to visit the Moorilla Vineyard and its Classics Museum and immerse myself in artifacts from all the ancient civilisations of our world. There were even beautiful Roman mosaics inserted under glass in the Tasmanian oak floors. And I miss that wonder. 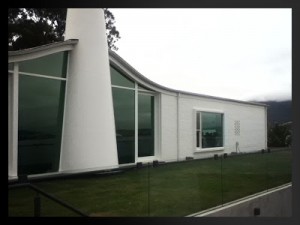 I miss the sheer beauty of Claudio Alcorso’s house and the fact that even in the Southern Hemisphere, I could stand in front of an Egyptian sarcophagus or a coin from Jerusalem dated to the time of Judas of Iscariot. Or that I could stand over a Roman mosaic, marvelling at the time-altered colours and perfect subject matter.

The collection has been absorbed by the new owner into this astonishing museum and there are pieces here and there, but the curation is vastly different now and must be viewed as such. This new museum now draws visitors from across the globe and is designed to startle, if not shock. As we returned to the ferry, we were surrounded by British, Russian, Scandinavian and Chinese accents and were quietly thrilled that this strange, unsophisticated little island could provide such a magnet for the eyes of the world.

If one visits this new Museum with eyes wide open and accepting that all cultural standards will be altered in the time spent there, then one can come away breathless and surprised. 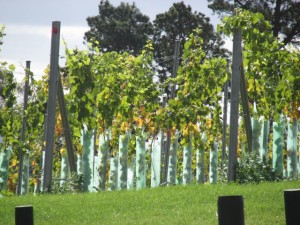 But me being me, I needed to look along a gloriously pastoral scene of the old Moorilla vines to ground me back into reality.

An interesting and thought-provoking day…