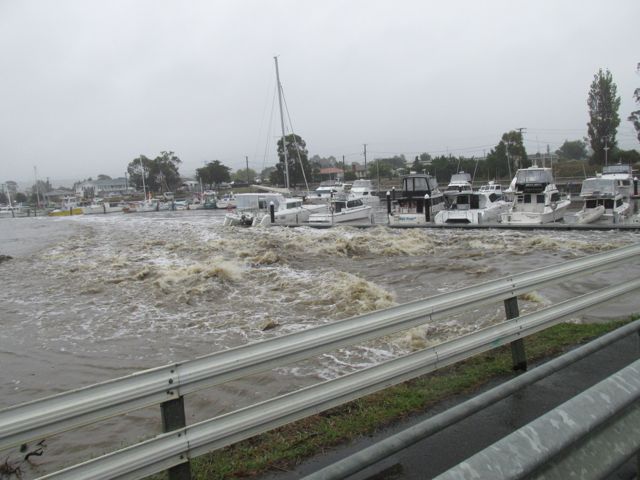 Hear that rain fallin’ down…

The Big Dry has kind of bust. 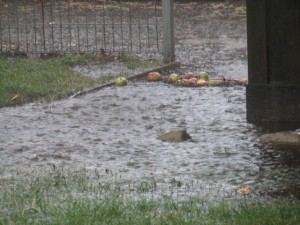 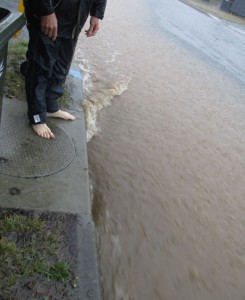 The south-east of Tassie which is where our farm is situated has been hit by up to five inches of rain near House. But sadly the north-easterly stream which brought the weather here, did not quite make it over the ranges to dump on our farm. Instead it showered rather than poured.

Nevertheless, it is STILL showering and whilst to date we have received an inch, we may get a little more by the time the weather front and associated low-pressure cells drift away. It’s dampened the ground enough for us not to have put the irrigator on for a few days, the rape is sitting up as happy as Larry, our oats may shoot again and our ploughed paddocks can probably be sown down to more oats. One can’t be anything but philosophical (and hopeful) when one is on the land. 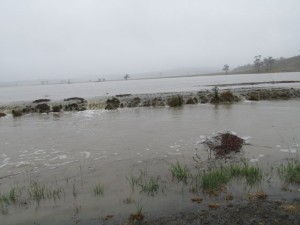 Perhaps added to by the sight of farmers up the coast losing masses of topsoil as five to eight inches of rain hammered down their hills and valleys and out past the marina in a close-by town. So we are cautiously optimistic about our lighter falls.

Of course the most important thing is those farmers who are further up the coast and who don’t have the advantage of irrigation like we do, have had masses of rain to fill their waterholes and to drive some pasture to come away. 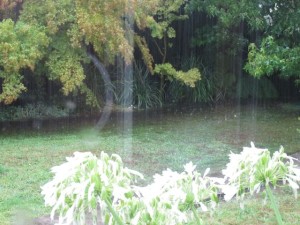 But when I arrived back at House today from the Big Smoke, after attending a fab book launch for The Latte Years, our little home was damp – the pine floor was awash in the sunroom and is now covered here and there with a lot of towels. The gardens were almost under water. 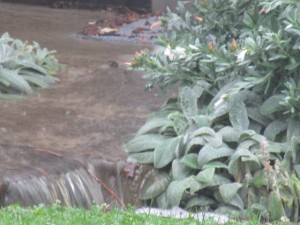 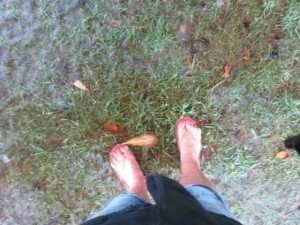 and wearing thongs (flip-flops to the rest of the world) whilst lightning clove the air in two and thunder gave Dog a panic attack. It also gave me the worst headache (always with thunder!) but it was worth it to see the rain come down. 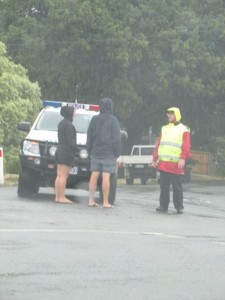 We couldn’t get back to the farm or the Big Smoke if we wanted because the highway was flooded and the Police blocking the way. And when we tried to go further south to see how friends’ farms were managing, we were blocked that way as well as Thumbs Creek came thundering down from the hills. 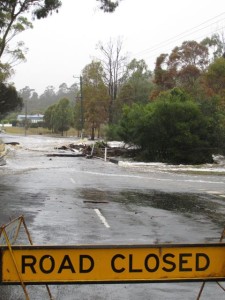 So we crept down the dirt back road which was cut and flooded and a mess and got as far as a bridge just before our friends’ farm. The road had been eaten away across a log bridge. Fine for foot traffic but not the best for a big 4 wheel drive ute.

When we arrived back at House, the birds were feasting on worms and my dry-as-dust veggie garden was sodden. The willows hung low with wet folds and were swinging in a bad tempered way across the roof of the house and the little boatshed…

It’s supposed to be damp tomorrow and wet on Sunday with more wet on Monday and Tuesday and to be honest the river and beaches are so filthy with run-off and flotsam that I don’t mind at all because whilst OH and son have a crop they want to sow in the moist soil, I have a novel to write!