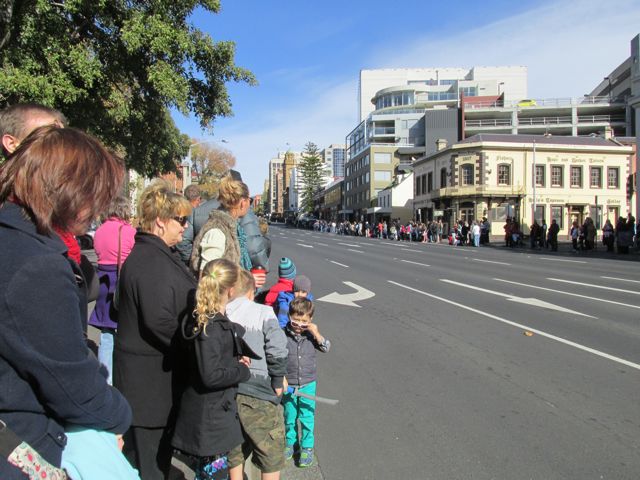 Anzac Day, April 25th, inspires many things if you are an Australian or a New Zealander – thoughts about mateship, courage, sacrifice, belief in fundamental rights. It also reminds we children of Anzacs that what we are right now is a product of the spirit and ethos captured on that small beach at Gallipoli 99 years ago.

Today was the first time we’ve attended a city march for six years and we were saddened by the reduction in numbers of those marching.

My father’s fellow WWII Airforce group is much reduced for example. There are obviously no more WWI vets. But the re-enactors did a stirling job – the Light Horse troupe and WWI and WWII nurses dressed and parading with family medals.

And attendance at the dawn service at our city cenotaph was the largest ever.

Confronting though to see the Vietnam vets and to realise that I am of their era and that they are now the largest group in the Anzac march where once they were the smallest. I was at university during the Vietnam War and saw a number of friends receive their call-up in the ballot. One returned to university after his service and disgusted by the way in which he and his fellow servicemen were ignored post-duty, he organised a march to counteract the anti-Vietnam rally some university students had planned. I was his friend and studied a couple of subjects within his faculty and agreed to march with he and other returned servicemen and we had eggs, tomatoes and flour bombs thrown at us.

And yet now, thankfully, we recognise the bravery and selflessness of he and his fellows and everyman and his family turns out from dawn to dusk to show their respect for the bravery of men and women who fought in overseas theatres.

As we drove back to House from the city, we saw smaller services at country cenotaphs and were reminded of the wonderful dawn service we went to in our own district last year. In every town and village around Australia and New Zealand today, people have been doing the same thing – marching, remembering, laying wreaths and then joining together for morning teas, lunches and a good old booze-up at pubs and the servicemens’ clubs.

All as it should be…

Also really wonderful to see that Kate and William attended the Dawn Service at the National War Memorial in Canberra, unscheduled… (this image courtesy Getty Images)

And then (scheduled) the main service later in the morning. (This image courtesy Getty Images)