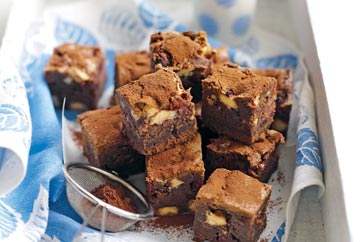 On Friday, Bopress Miniature books asked if I was interested in writing a short-story about Gisborne for the studio to create and bind a special book. I needed no urging because last year the studio did a beautiful version of The Masked Ball around the time that we were actually holding a ‘virtual’ masked ball on the blog.

So I sat and thought… and thought and thought. Trying so hard to conceive an idea that wasn’t just a repeat of the novel in progress, or that gave away any of my planned ending. Nothing seemed to be working so I thought I needed chocolate. Chocolate brownies to be exact… so out came the favourite recipe (see below) and I made a batch.

It served its purpose and I sat last night with a cup of tea and a brownie and with the overload of sugar, began to write the short-story.

I finished it an hour or so ago, edited it, made sure references were correct and then emailed the end result to California.  The journey through that story, whilst short in word count was phenomenal in terms of my novel-in-progress. I now have a firm ending in mind, which is nothing like I thought it would be AND gives me the chance to…

Ah, better not say. It would be classed as a spoiler. Anyway in this little story, Gisborne is still one of my favourite ever characters. I truly can’t wait to see what the miniature book is like!

150g of raspberries (if frozen, thaw)

Preheat oven to moderate, Grease a slab pan and line bottom and sides. Melt choc and butter in bowl over simmering water, then cool.

Add vanilla and sugar to beaten eggs and pour in the slightly cooled  chocolate, then beat again lightly. Add flours. Then add white chocs and raspberries and stir with spoon.

Spread mixture in pan and bake for approximately 35-40 mins. Take care not to overcook as brownies should be fudgy in the middle.  Cool, cut into squares and refridgerate.

PS: I think Gisborne likes them too.

‘One for the Sheriff, two for me!’