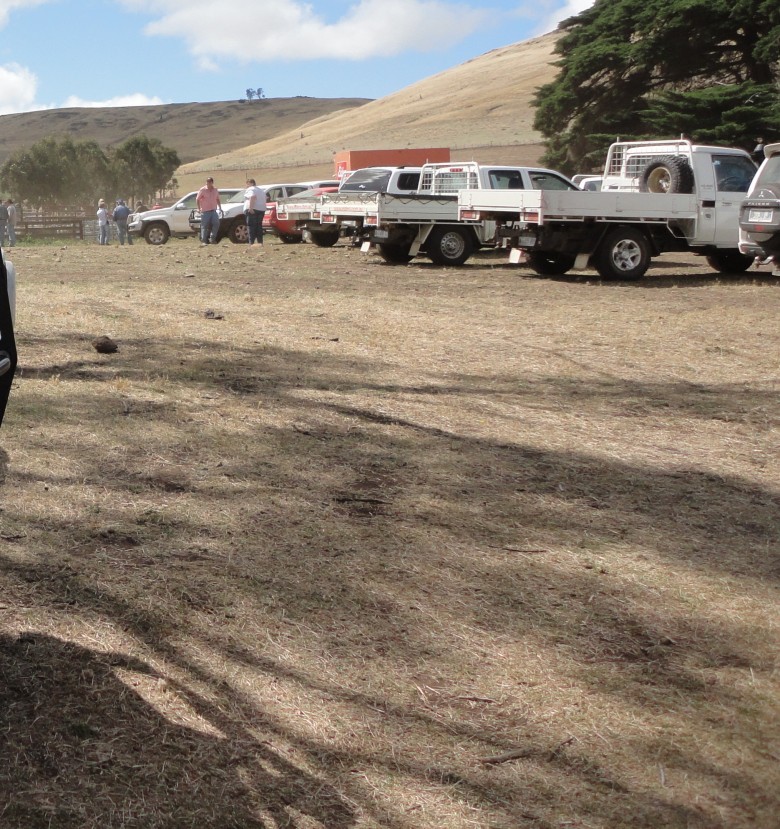 Historically, Australia was said to have derived its burgeoning economy from the sheep’s back. Our history is marked by the introduction of Saxon merino sheep to the colonies in 1804. Farming wool became iconic and superfine Australian wool became world-renowned, beloved everywhere for its softness and purity.

Today, my husband and I set off to buy in new merino breeders at an auction. We drove for two hours into the midlands of Tasmania, across dirt roads with swirls of dust curling up behind the back of the ute. We passed through the farm gates and bumped over a dry paddock to where disorderly lines of dirty utes and stationwagons were parked under whatever shade could be garnered. In the yards attached to the shearing shed, red-shirted agents yarded 5000 merinos, more dust filling the air and coating faces, hair, boots and jeans. Dogs barked, men yelled, sheep bleated.

Whilst it’s social, it’s informal. Buyers (ie farmers) had literally left their paddocks, leaped in their utes, dashed to the sale (lunchtime), shaken hands, laughed, joked, jumped over the yard fences and checked the various sheep for sale and then quietened and mustered into groups, talking about likely prices. Nearly all men, fifty or so of varying ages – young and old, handsome and ugly, tall and short, fat and thin. Only eight women. And then the agents calling ‘Sale-o, sale-o!’

People gathered at the first pens where the tops were yarded; more dust, denim shirts now dirty, dogs hot and tired. My hands held to my forehead as I’d forgotten a cap. A moment’s quiet as the auctioneer sucked back water and then a brief housekeeping note on the running of the sale and the first pen went up. A pen of 350 one and a half year old ewes. Good lines, good wool, good condition. The week before at market, the culls from this farm had sold for $200 plus per head.

The auctioneer clapped his folded forms against his hand, dust rose. And over the sheep’s back he looked at my husband and I and at our agent, ‘ 200 at $195, SOLD! 150 left starting at $170?’ And off he went again, selling the rest of the pen.

It was rapid-fire. They moved on from one pen to another, pen after pen of sheep until the whole 5000 were sold to new owners.  Dust continued to rise and when I turned back as we walked to our ute, all I could see was a taupe fog and sheep and men mingling like spirits of the bush. It occurred to me that I was observing a scene that has been played out in the same way since colonial times. No difference at all really. Forget about the cars and the denims, essentially its all the same. The dogs, the heat, the dust, the bonhomie, the nods and winks…

And I think that’s what I love about farming more than anything, that whilst science helps us farm better, there are some things that never change and this kind of day is one of them and there’s a real surety in that.

« A Ball at Pemberley…
Gisborne… the first instalment for FanstRAvaganza »