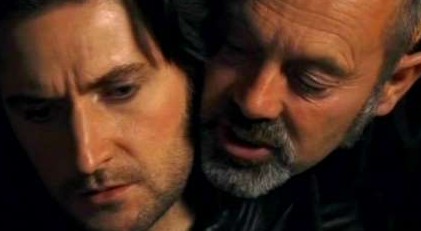 A man whose manner had stood the hairs on my neck and who bowed over my hand with a look as licentious and assessing as it was cunning.  ‘But he looks nothing like you,’ I said.  I recalled him standing next to Gisborne in that cobbled street.  He had none of Guy’s angularity, nor the breadth of shoulder.  Why, the man was quite ordinary.  Any semblance of strength was an optical illusion bought on by the cut of his tabard with the insignia of the Free Lancers.

And his colouring. Where were the fine skin tones of the Gisbornes.  The midnight hair and dark stubble, and eyes the colour of the sea?  Vasey’s colouring was as flesh-toned as a babe’s.  His thinning hair was a peppery shade that would no doubt fade to salt if he could hold on to it.

‘No,’ said Guy, continuing to stare across the decks.  ‘And yet he is the child of my mother’s sister.’  The sea hissed along the sides of the vessel as though it mocked this odd revelation.  Above us a seabird cried out as if to underline the ocean’s rejection of this claim of kinship.  The sun had become lost behind a drifting grey cloud and I shivered slightly in the damp.

‘What were the two sisters like?’  I felt that anything I could glean from Guy was to my benefit.  Such things as hair lifting on my neck didn’t happen without reason.  Besides, Guy became such a different person in Vasey’s company, a person I didn’t recognise and it boded badly, I was sure.

‘Dark.  My mother was . . .’ he stopped and I could see the pain implicit in his recall and laid my hand on the leather of his sleeve.  But he barely reacted, choosing to continue with his gaze resting on a far-off memory on the horizon.  ‘My mother was a beauty.  Dark, elegant with piercing blue eyes that people used to say were fey.  As though she could have come from the mists of Avalon or some strange, enchanted isle.  My aunt Marie-Ann was shorter, equally as dark, but her hair curled wildly whilst my lady mother’s was straight, and my aunt’s eyes were green.’

I recalled Vasey’s own; green with a taint of mud.  ‘His father, then.  It must be that his father was fair, surely.’

‘Roger de Vasey came from Amiens and he was quite fair.  He was a mercenary, one of many Henry employed with scutage monies and when Henry landed in Dorset, Roger was amongst the army with a force that came to Henry’s notice for its organisation and performance.  After the Treaty of Wallingford, the king rewarded Roger a title and land near the Welsh border.  Roger renamed Glastondale Vasey and whilst it was a large estate, I think he always envied my father the richness of Gisborne’s lands.’ Guy settled into the telling and I let him talk.  ‘Roger and Marie-Ann caught an ague when Robert was about twelve years old and Roger sickened rapidly and died within the week.  Many others died on the estate as it swept through like a plague and not long after Roger was buried, Marie Ann died and Robert was left an orphan.’

He leaned back against the gunwhales and folded his arms across his chest, a defensive position, as if he warned the world away.  ‘My mother insisted that Robert come to live with us.  The estate was sold and the monies held in trust for him for when he should need such funds.’

‘He is a year or two older than myself and my father made sure we had the same education and training.  We were taught all the skills a young knight should need.  As to getting on . . . yes and no.  We tolerated each other.  Robert adored my mother Ghislaine, and has never made a secret of the debt he owed her for taking him in, but in so many other ways he is grateful for nothing but what he takes for himself.  Yes, he is my cousin, and yes, we lived like brothers, but I have never liked him.  Ever.’

I was almost going to say defer to him, but I stopped in time because such a statement would only have demeaned Guy and I would not do that.

He continued Robert de Vasey’s history as if I hadn’t spoken and I gazed at him.  His eyes had no vestige of emotion in them and his jaw was quite rigid.  I could only presume that every word he uttered unleashed a host of memories that he had thought to leave locked in some private room of his mind and that my persistence and perhaps our relative closeness had turned the key.

‘Robert departed Gisborne when he turned sixteen whereupon he asked my father for his funds and left to join the Free Lancers.  He has fought wherever the mercenaries secured contracts and was knighted around the time of Beckett’s death.  I would prefer not to imagine what for.  I know you wonder why I should have anything to do with a man whose principles you don’t like, but whilst in the Holy Land he kept an eye on my father, paying money to the Order who cared for him in his last days and arranging for a Christian burial.  Whatever I might think of my own father for deserting us, I presume I owe Vasey for that thought at least.  And in addition, he . . .’ Guy stopped as though he suddenly thought he didn’t want me to know any more.

But I was too quick, some would say precocious.  ‘And in addition he has offered you a position, hasn’t he?’

Guy finally looked at me.  At last he seemed to acknowledge that he hadn’t just been speaking to an empty space next to him on the deck.  ‘My father left for the Holy Land within a month of Robert leaving Gisborne.  In fact they fought side by side at one point.  Robert was aware that the Templars had taken over the care of our estates and by various means he eventually heard that my mother and I had been turned off and that during our journey to the Priory my mother had died.  Be under no illusions, Ysabel, he doesn’t offer me a position in his army out of love for me, or even pity.  Strangely for a man such as he, he offers it as a payment of a debt to my mother.’

It was strange.  Vasey followed his own star and I found it hard to imagine that he felt any kind of debt to Ghislaine of Gisborne.  But perhaps I was wrong.  Maybe he did feel great affection for his aunt.  I would never know and could only take Guy’s word.  ‘So you will join the Free Lancers after we return to England?’

‘He offers me wealth, Ysabel.’

He offers you status and power, Guy.  It’s what that bitter side of you craves. My thoughts were broken by a yell from aft.

We turned and looked behind us.  In the faraway distance, I could discern a sail.  A crewman hopped on the rigging and scrambled aloft and eventually his shouts dropped down to the decks.  ‘A cog, full sail, sittin’ high in the water.  Canna see her colours.’

Almost immediately I recalled de Courcy striding along the wharf, that red flash of anger implying that he would move Hell to accomplish his mission.  Why he wanted to intercept me before I reached Moncrieff I was still trying to puzzle.  ‘It’s de Courcy, Guy, I know it.’  There was nothing solicitous about the way I grabbed his sleeve and dug my nails in.  ‘If the ship’s in full sail and its sitting high in the water, it means she has no cargo and will catch us easily in this breeze.’

‘Now don’t take on so, Mistress.’  Davey’s voice touched us from behind.  ‘Davey’s been known to sail this ditch in a chase many a time and in many weathers and none’s yet caught him.  Besides, there’s a bit of a mist coming, look you.’

I could see that the grey cloud of earlier had thickened and dropped low, hanging wisps of fog across the wave tops.  The cog astern drifted in and out of view.

‘I can sail into a creek from here with my eyes closed.’  Davey grinned, his stained teeth showing big gaps between.  ‘If you and the master here need to make secret landfall on English shores, then I swear that’s exactly what’ll happen.’  He began to walk among the crew speaking softly and each man went to the hold and heaved a hogshead onto his shoulder.

‘What do they do?’ I asked, aware that I was tense as the tone of my voice pitched itself higher.  The hogsheads were hefted over the Marolingian‘s sides, one after another splashing into the Channel and bobbing aft.

‘Don’t fret, Ysabel.  They’re empty.  They were merely subterfuge.  Davey has been waiting for us to arrive.  I organised it on my way to Montrachet.’

My mouth dropped open.  ‘You did?  Does this mean then, that you anticipated trouble?’

Guy nodded.  ‘One can’t be too cautious and Gelis had given me to understand that you had become a valuable commodity.’

Holy Mother but I was angry. All this time . . . ‘It didn’t occur to you that you might pay me the respect I deserve by telling me this back in Aquitaine?  God, Gisborne!  How dare you?’

‘Oh hush, Ysabel.  Don’t rant.  The crew will think you a harridan.  I had no idea what you were like when I met you.  It seemed to me enough that you knew your father was ill and that Moncrieff suffered in consequence.  And besides, you grieved for your mother.  If you ask me, I showed a great deal of respect for you.’

‘There you are, Mistress.’  Davey joined us.  ‘Already we make extra speed.  And we’ve got a thickening mist and they can’t see us.  By my reckoning, we’ve a few hours sailing northerly whereas they think we sail westerly.  We’ll be right where I want us when we hear waves on the English coast.  We’ll sail on, maybe a day or so, until we get close by Harwich and then I’ll signal to shore and one of my mates’ll row out and collect you.’

Guy gave me a fiendish grin.  ‘See, Ysabel.  All you have to do is trust me.’