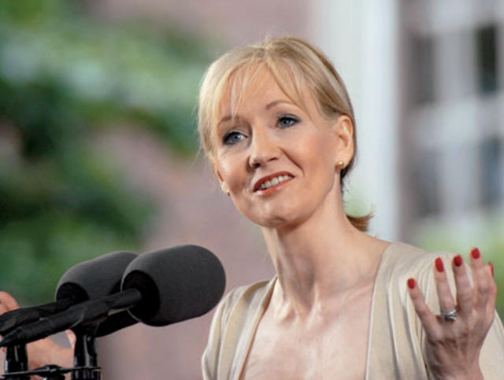 Yesterday, Aimee Salter posted a link to JK Rowling’s speech at Harvard in 2008.

Both my husband and I watched it on the computer.  It’s a compelling speech on so many levels, and I urge anyone who is interested in ‘LIFE’ to watch it.

JKR spoke winningly about failure and about imagination.  These two things could justifiably be considered a necessary part of the writer’s life and so it was with curiosity and admiration that I listened as she turned them away from ‘the writer’s life’ and showed how they are a part of life generally.

After she had concluded, I thought back to my own graduation and wondered what I had felt on the cusp of a post-academic existence.

To be truthful, relief.  Even though I was going into postgraduate study, it would be on a different and smaller campus, with a brand-new course and with an end visibly in sight as at that time I knew I had a position in the Reference Library of our State Library system.

Was I afraid of failing?  Not at life, no.  At my graduation two things caused me angst.  One was that I had left it too late to hire a proper fitting hood and had one that was way too big and it kept slipping and pinioning my arms and I was worried I wouldn’t be able to lift them to receive my piece of paper and shake the Chancellor’s hand and do all those other ceremonial things that are required.  The other was that really I was too sick to care one way or the other.  I had a serious dose of glandular fever (mono) and would end up in bed for 3 months, missing the first half of my diploma year.  In fact, my fear was that my legs wouldn’t carry me across the stage and that I’d fall into the Chancellor’s arms.  My fear of failure came later.  After the first year of work, I found working in libraries was not for me and without discussing anything with my parents, I handed in my resignation, walked straight round to the Australian Broadcasting Corporation and begged for a job.  Got one immediately and in trepidation, caught the bus home and presented my life as a Fait Accompli to my father.  That was when I felt I might be a failure. But my decision to act as I did subsequently introduced me to my husband and the rest is history!

JK Rowling talked about failure’s and imagination’s impacts further on in life and I can only say that each had its own impact on me.  At this point, and against the monumental detail of JK’s experience, it doesn’t bear relating.

But it did change my life in so many ways and gave me the desire and strength to push onward and upward against what I perceived as huge obstacles.

Imagination sustained me through my own personal hard times.  It’s why I write fantasy, it’s enabled me to place myself in other’s shoes, to feel their emotions, to aim as high as I can.  Which is exactly what JK has said it should do.  And I hope it’ll continue to do so until I am too old to care.

Have a look at the speech and see if you are as inspired as myself.  I’d be interested to hear how failure and imagination impact on your own lives.