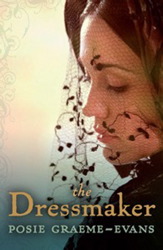 I went to a book-launch tonight.  Given that I live in an island region of Australia, in a little town, it was so rewarding to attend the launch of new historical fiction title by internationally acclaimed writer, Posie Graeme-Evans. And the book is The Dressmaker.

For a brief bio on Posie you can go to Wikipedia, but her claim to fame, apart from being Tasmanian is that she was the creator of the children’s entertainment group Hi-5 and also the iconic (and now popular overseas) Australian TV series Mcleod’s Daughters. For those on and off the land, the feisty Mcleod girls showed farming like it was ( and in some cases, how we women on the land wanted it to be).  During those frantic years, Posie wrote a best-selling historical trilogy on Ann, mistress of Henry IV. They are fast-paced books with an engaging heroine and in fact after listening to Posie talk tonight, it is easy to see why her characters are so engaging . . . she is a communicator par excellence.

She talked about the fear of a writer.  She said she doubted there would be a single writer who hasn’t felt as if they stood on the edge of a cliff looking down.  And in a way I agree.  The vast tracts of solitary hours, putting your name behind what you write, selling it, selling yourself and your reputation.  Placing yourself where you may stand or fall, where you may secure rejection and critique that pulls you apart if you let it.

Over the years of E.P.’ing Mcleod’s, she learned the art of boxing up her fear at night, of placing the fear in a box, locking it and placing it in another box and so on, until it could be placed in the attic and the attic locked and then the house locked whereupon she said, she would mentally drive away or fall asleep. But it worked and enabled her to move on with any project in hand at the time.

She said the art of discipline is vital.  That when she sits to write, she writes.  She doesn’t get up and make cups of tea or become diverted.  She keeps writing.

She also said how hard it is to let go of a favoured heroine when a work is finished. They are part of a writer’s fabric, having lived and breathed courtesy of the writer.  I imagine it is a small death in a way.  I know I miss my own characters.  They are my family.

The launch began with a wonderful book-trailer which had the stamp of a fine TV producer and it snaffled my interest and of course I bought the book and Posie signed it for me.  http://www.youtube.com/watch?v=-jUcU0oO4_g

The book is a stand-alone but Posie’s skill has been recognised and she is due to hand in another ms. in February to Simon and Schuster, this one a mystery of a connection between a contemporary woman and a recently discovered Viking ship and the remains of two warriors.

Her work is diverse, and thrilling for it’s diversity . . . I look forward to beginning The Dressmaker this evening.